6 Train Trips You May Not Have Heard Of

There is nothing quite as relaxing as a long train journey across a beautiful landscape, with nothing to do but watch the world go by. Here are some of the best options on earth for those who prefer to go by rail.

Affectionately known as the “Toy Train,” the Darjeeling Himalayan Railway snakes its way up the foothills of the Himalayas from the Indian city of New Jalpaiguri to the famous hill stations of Darjeeling. This steam-powered train is small, its tracks narrow so that it can make its way through village streets and mountainous terrain. On the way, you are treated to stunning views of the hills and tea plantations, the hot Indian air cooling as you rise. No wonder this railway is listed as a World Heritage site.

The trip takes about 7 hours from one end to the other. Make sure to check whether the service is running before planning your trip, as landslides in the area sometimes block the train’s path.

This epic train journey crosses the full length of Australia from top to bottom takes 54 hours to complete. Passing through the heart of Australia’s outback, this is perhaps the best way to see the wilderness of the country: from the comfort of an all-inclusive train cabin. There are a few itinerary options for travelers, but the four-day Ghan Expedition from Darwin to Adelaide is the full experience.

Several stops along the way allow you to get out and explore in person, but the highlight is seeing the otherwise inaccessible and remote interior of the country through your window, from northern rainforests to the “red center.” You can keep an eye out for some of Australia’s iconic wildlife, such as kangaroos, as well as some rarer species like the camels that are represented in The Ghan’s logo.

This train is the only daily steam service in the UK, and arguably one of the country’s most iconic trains. Its main claim to international fame is its association with the Harry Potter films, which used a train made by The Jacobite’s manufacturers as well as parts of the steam engine’s route for their depiction of the Hogwarts Express. The scenic Glenfinnan viaduct, in particular, was featured prominently in the film and has become a popular point of pilgrimage for fans of the series.

However, The Jacobite is not just for Harry Potter fans. The steam train makes its return journey from Fort William to Mallaig twice a day, providing stunning views of the Scottish Highlands and coastline, crossing mountains, lochs, rivers, and glens. Travelers also get a chance to enjoy a few hours in the charming coastal village of Mallaig before beginning their return journey, or they can take a ferry to the famous Isle of Skye.

4. The Train To The Clouds

El Tren a las Nubes is the fifth-highest train journey in the world, taking you along the Andes from Salta in Argentina to the Chilean border. Because it does not use a rack and pinion system, which enables trains to rise steep inclines, the Train to the Clouds is built on an impressive track of tunnels, bridges, spirals, and zig-zags, which allow the track to remain level even as it rises into the mountains.

The trip culminates at the La Polvorilla viaduct, an impressive steel structure that is one of the highest and tallest of its kind. The service runs weekly, departing early in the morning on Saturdays and returning at around midnight. There are various stops along the way where travelers can get a taste of rural Andean life, exploring local markets and sampling regional specialties.

Stretching from Chicago to San Francisco, the California Zephyr is one of the best ways to see the varied nature of the U.S.A. in all its glory. Operated by Amtrak and clocking in at almost 52 hours, this scenic journey takes you across the Rocky Mountains and the Sierra Nevada, along the Colorado River, and directly through endless fields of grain.

The train stops in various large cities along the way, including Denver, Salt Lake City, and Reno, which makes it easy to hop aboard at various points if you do not feel like taking the full ride. There are various accommodation options available, from a no-frills coach seat to a full bedroom suite.

In a country full of scenic train journeys, Germany’s Harz Railway is a strong contender for the most beautiful views. Passing through over 40 charming German villages, as well as castles, forests, mountains, and rivers, it is the best way to see Germany’s highest mountain range in the very heart of the country. At certain times of the year, you can expect to see magical snow-covered landscapes from the warmth and comfort of your steam-powered carriage.

The full network is actually made up of three routes: Harzquerbahn, Selketalbahn, and Brockenbahn, with the first being what is commonly known as the Harz Railway. Most tourists use the train to reach Brocken, the highest peak in the Harz and a popular destination for hikers.

If you’re looking for a somewhat old-fashioned but still efficient way to get where you’re going, and if you cherish a breathtaking view, consider booking one of these train trips. We’re sure you can… engineer something. 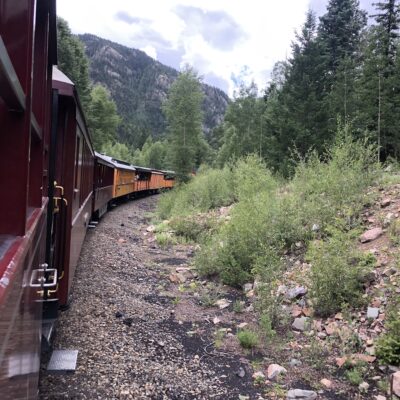