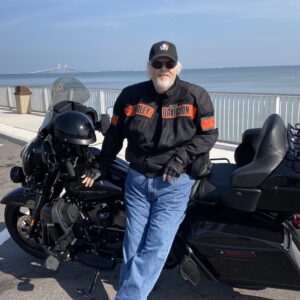 Bob is catching up on years of missed travel. Despite the time at work, he’s been busy seeing the country on two wheels for the past 15-plus years. He has seen most of the country from a car, but he is “experiencing” it on a motorcycle. He studies maps for fun to find those roadside oddities that just beg for a stop. From Cadillac Mountain to Death Valley and Glacier National Park to Key West, he’s also found new riding companions, interesting fellow travelers, and many additions to his “Need To Ride There” list. He’s also learned some clever touring and packing secrets that work for all kinds of travel, not just motorcycle jaunts.

While Bob has traveled outside the U.S. to London, Spain, Gibraltar, Ibiza, and extended time in Russia, his travel focus is on America. Bob has ridden the Lower 48 and completed multiple cross-country rides on his Harley-Davidson, as well as riding Route 66 and from El Paso, along the spine of the Rockies, to the Canadian border. Riding mostly with his wife, Pam (she has her own bike), they have logged a combined 250,000-plus miles on their Harleys. Among his favorite travel memories are 10 consecutive years of riding in Rolling Thunder on Memorial Day weekend in Washington, D.C.