Grand Teton National Park, Wyoming, has some of the most beautiful scenery I’ve ever seen. Compared to Yellowstone National Park, its famous neighbor to the north, it has fewer visitors and fewer traffic jams of both the car and bison variety. You’ll find ample turnouts and overlooks in the park, all situated to take advantage of amazing views.

The park is named for the towering, rugged Teton mountain range that occupies the western third of the park. The Teton Mountains, which are part of the Rocky Mountains, provide a spectacular backdrop to the pristine lakes, rivers, and valleys you’ll see.

Jackson Hole is the valley formed by the Teton Mountains to the west and the Gros Ventre Mountains to the east. The town of Jackson, at the south end of the valley, is a bustling, trendy Western town. It serves as a great home base for a visit to Grand Teton National Park. The area’s only commercial airport is in Jackson Hole, 7 miles north of Jackson.

Just a note about cameras — the best camera is the one you have with you. I have a micro 4/3 camera (Olympus) which is small, lightweight, and has interchangeable lenses. Since it’s lightweight, I don’t mind hauling it with me on hikes. I bring a long lens since I’m likely to spot wildlife.

That said, I took most of these photos with my Samsung phone. I enabled the HDR (high dynamic range) setting, which makes the colors more vibrant. I switched on the scene optimizer. I cropped several photos but otherwise, they are unedited. I’m sharing this so you know you can get these same results without a professional camera and without post-processing in Lightroom, Luminar, Topaz, or any other photo-editing software.

I went to Schwabacher Landing several times during my visit to Grand Teton National Park, both at dusk and at dawn. Thanks to an industrious family of beavers, a branch of the Snake River has been dammed, creating a series of ponds that provide an opportunity to photograph the Tetons and their reflection when the water is calm.

As you turn off U.S. Highway 89/191, the main north/south highway through the park, it’s a steep descent down to the valley. Midway, the road becomes gravel but is passable in a car, even if the vehicle has fairly low clearance.

Once you reach the parking lot, a short walk takes you to a spot overlooking a branch of the Snake River with the Tetons in the background. Continue on the trail that follows the stream for another 0.1 miles until you reach the beaver dam. The elongated pond provides a number of prime photography spots.

In addition to beautiful scenery, you may have the opportunity to photograph waterfowl and moose here.

Pro Tips: The Tetons are lit at sunrise, but I had better luck spotting wildlife at dusk. Any time of the day, the scenery is amazing. There is a vault toilet in the parking lot.

Mormon Row Historic District is perhaps the most photographed of all spots in Grand Teton National Park. Barns and houses left by the Church of Jesus Christ of Latter-day Saints homesteaders, who settled here in the 1890s, are photographed most often at dawn with the sunlit Teton Mountains in the background.

To reach Mormon Row, turn east on Antelope Flats Road from U.S. Highway 89/191. The 15-mile drive from Jackson takes about 25 minutes. The road is closed from November to May.

Pronghorns and bison can be seen in the area. If you’re lucky, you can capture a bison grazing in front of one of the barns.

Pro Tip: Take care when walking around the barns as there are prairie dog and badger holes that are a tripping hazard.

The Oxbow Bend Overlook on U.S. Highway 89/191 allows you to photograph a sweeping bend in the Snake River. Both sunrise and sunset offer the best chance of photographing the reflection of the mountains and sky when there is little wind over the slow moving part of the river.

In addition to getting a great photograph of the river, marsh, and mountains from the high vantage point, you may also see moose, elk, and bear. Of those, moose are most commonly seen. Keep an eye out for osprey and bald eagles.

Pro Tip: The overlook has ample parking with room along the road for parking, if needed. Hiking down the embankment offers another perspective, but the path is steep and rocky.

This is another one of my favorite spots because the wide, marshy valley is a brilliant green in the early summer and the abundant willows turn warm golden brown in the fall. The majestic Teton Mountains jut out behind the valley.

The overlook is not marked on the National Park Service map but is accessed by turning west on Blacktail Butte Road off U.S. Highway 89/191, 400 feet north of Antelope Flats road.

This is a good place to spot wildlife with binoculars or photograph with a long lens. Elk, moose, and bears are spotted here, particularly at dawn and dusk. A trail descends into the valley, but because of the height of the willows, you may have trouble spotting wildlife from the valley floor.

If you’re interested in photographing the landscape, there’s no need to hit the trail — the view from the overlook is fantastic.

Pro Tip: If you hike into the valley, take , make some noise (talk or clap your hands periodically), and don’t take food with you. Bears would rather avoid than come in contact with you, but the dense foliage limits their ability to spot you on this trail. Likewise, a windy day may prevent a bear from smelling you and getting out of your way.

One of the best places to see wildflowers is Lupine Meadows. The view of the Tetons and the alpine lakes is worth the effort but the hike is long and strenuous. An easier place to capture lupines in early summer is near Spread Creek.

The lavender and purple wildflowers grow along U.S. Highway 89/191. Several pull-outs allow you to park safely.

The National Park Service commissioned Ansel Adams to take park photos in 1941. His Grand Teton National Park photo showed the Snake River meandering through a pine forest with the Tetons in the background. The full bend of the lake was visible.

Eighty years later, you can’t capture the same scene. Pine trees obscure most of the river’s bend, although the dramatic mountains and foothills still make for a lovely photo.

Pro Tip: I spent time photographing a chipmunk feeding on sage brush here. Be on the lookout for these busy creatures. They aren’t very wary of humans.

Established in 1937, the Million Dollar Cowboy Bar has been the go-to place for drinks, dancing, and live entertainment in Jackson.

Its iconic vintage sign with a rotating cowboy on a bucking bronco features prominently in many of Jackson’s historic photos and postcards. Stepping inside, get a shot of your friends in the saddle — the bar’s version of a barstool.

Pro Tip: If you’re traveling with grandchildren, they aren’t allowed in if they’re under 21. IDs are checked at the door.

Elk antler arches mark the four corners of historic George Washington Memorial Park, better known as Town Square. The first arch was erected on the park’s southwest corner in 1953. It was instantly popular, so the Rotary Club set about having the other three built.
Pro Tip: The southwestern corner arch is the most frequently photographed. Head to the arch on the northeastern corner (at the intersection of E. Deloney and Center streets) for a shorter wait to get your iconic arch photo without other visitors in the frame. 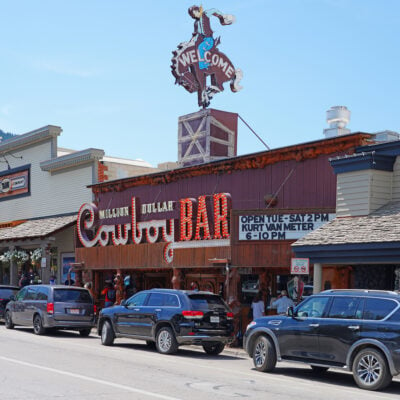 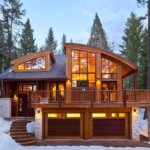 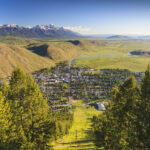 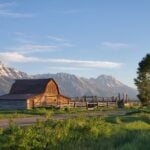