For The Fourth Year In A Row, This Country Has Been Named The Happiest In The World

For the fourth year in a row, Finland has been named the happiest country in the world.

This designation comes after a report by the United Nations Sustainable Development Solutions Network, a group responsible for an annual data collection and analysis across the globe. Launched in 2012, the World Happiness Report has consistently tracked the happiness, mental health, and satisfaction of residents for each country.

The World Happiness Report has analyzed countries’ happiness for years, but the 2021 report was the first time researchers have had to factor in a global pandemic. They specifically questioned whether the countries that keep their residents happiest were also capable of keeping them safest.

The other countries in the study’s top five are Iceland, Denmark, Switzerland, and the Netherlands, four countries that have consistently ranked high in the study every year.

“The countries that performed best in minimizing the direct death toll from COVID-19,” the study found, “were also able to do better on other fronts, including income, employment, and the mental and physical health of the rest of the population.”

Despite new qualifiers and increased standards, Finland remained at the top of the list.

“Finnish happiness isn’t skin deep and immediately visible — it’s deeply ingrained in our being,” explained Heli Jimenez, senior director of international marketing at Business Finland, in the country’s official press release reacting to the study. “Sustainable happiness is our superpower, and it means we tend to take life as it comes — a trait that is helping us through these challenging times.”

The press release goes on to explain that Finns often credit their sustained happiness with their connection to nature, seeing as 90 percent of the country is either forest or water.

For those interested in replicating the Finnish lifestyle, at least temporarily, a vacation to the country should include meaningful time in the outdoors. There are 40 national parks, and the country experiences all four seasons. Swimming, hiking, biking, and camping are always options to its residents, as well as its tourists, during the summer, and the winter months open up the opportunity for snow sports.

Finland specifically recommends four of their standard “happy” activities for tourists, as soon as their travel fully opens again: reconnect with Mother Nature, forage in the wild, explore the beauty and serenity of their lakes, and relax in one of the country’s 3 million saunas. Tourists can experience the community and high spirits of Finland, and become an honorary member of the happiest country in the world. 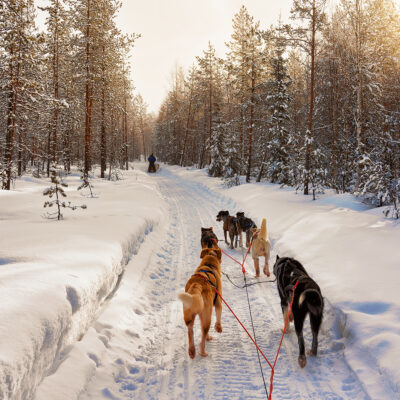