11 Things Not To Miss In Mexico City During Winter

Jo-Anne Bowen
All products featured on TravelAwaits are independently selected by our writers and editors. We may earn commission when you click on or make a purchase via our links.

Mexico City in January — what a fun time to visit! Recently, I spent a week living with a local family in the heart of the city. They shared with me their history, culture, traditions, and great places to dine. From floating gardens and city parks to sculpture gardens, the National Palace, the pyramids of Teotihuacan, Mexico’s most famous shrine, and the most important museum in all Mexico, there are 11 activities and sites you must not miss in Mexico City during the winter.

1. Murals Of Diego Rivera At The National Palace (Palacio Nacional)

The National Palace, located on Mexico City’s Main Square, El Zocalo, is home to the president’s offices, the federal treasury, and the National Archives. Significant are the Diego Rivera murals located around the courtyard. Painted between 1929 and 1935, the murals detail Mexican civilization’s history from the early days to the 1910 revolution. Admission is free. I recommend purchasing a small booklet with detailed guides to the murals. It is available just inside the main gate.

Also located just off El Zocalo, a walkway surrounds the ruins of Templo Mayor (the Main Temple). Templo Mayor was the Aztec People’s main temple in Tenochtitlan’s capital city, now Mexico City. It wasn’t until 1978, when city workers discovered an eight-ton carving of an Aztec goddess, that excavation began on the site. There is also a museum with eight exhibit rooms housing more than 7,000 objects.

After visiting Templo Mayor, spend some time in the central park, El Zocalo, to enjoy the modern daily street life of Mexico City. We enjoyed watching the Conchero dancers, a group of street performers who strive to keep alive the Aztec heritage. We also observed people doing spiritual cleanings, which incorporate beliefs and practices that originate in Mayan, Aztec, and Catholic traditions. My hosts mentioned, “This is very popular here.”

We enjoyed a gourmet lunch at the Casa de Espana Restaurant in the historic Casino Espanol Building. TripAdvisor awarded the restaurant a Certificate of Excellence. It is a very popular restaurant, so I suggest reservations.

Across the street from the National Auditorium is the complex of Campo Marte. It is the base of Estado Mayor Presidencial — the force who protects the President of Mexico. It is a vast complex that houses a sculpture garden and sports field and is home to the Monumental Mexican Flag.

The sports field hosted dressage and jumping events of the 1968 Summer Olympics and the 2008 World Polo Championships.

The complex also hosts ceremonial events, many under the Monumental Mexican Flag, which is 150 feet by 84 feet and is raised on a 300-foot flag pole.

Acclaimed as one of the most important museums, the National Anthropology Museum houses one of the world’s largest collections of pre-Hispanic artifacts and artifacts of today’s indigenous groups. There are 23 permanent display rooms in an exhibition of over 90,000 square feet. Each has a theme, for example, Aztec, Pre-Classic, Teotihuacan, and Toltec. “Mexican history doesn’t belong only to Mexico. It belongs to the whole world!” exclaimed our guide, Pablo.

I suggest that you visit on at least two occasions — a visit all in one day would be too much.

I also enjoyed the museum gift shop, particularly the Mexican silver jewelry. The prices and quality were the best I had seen.

The Museo Dolores Olmedo houses the art collection of Dolores Olmedo. It is a five-building complex that dates back to the 16th century and includes pre-Hispanic, colonial, and modern art. It boasts of “the greatest collection of Freda Kahlo and Diego Rivera art” in the country.

Take time to stroll the beautiful gardens as well. Plan to allow at least half a day.

A great place to dine is Bistro Chapultepec. The restaurant prides itself on offering European dishes with a touch of Mexico. One can choose between inside or outside seating. The setting is magnificent — along a small lake. Do plan to take the time to stroll the grounds.

Acclaimed as one of the most impressive archeological sites in North America, the Pyramids of Teotihuacan are a must-visit when in Mexico City. The site is the most important and largest pre-Aztec city in Central Mexico. It also boasts of the largest accessible pyramid in the world.

Located just 30 miles from the city, one can visit by bus, shuttle, or Uber.

There are two pyramids: Pyramid of the Sun (a restoration) and Pyramid of the Moon, plus murals, carvings, and several museums. The site is particularly prized because the Spanish destroyed many Mexican pyramids.

Pro Tip: If you plan to climb the pyramid, wear comfortable closed-toed shoes. The climb is very steep and not for everyone. You can still enjoy the site and history from the base. Also, wear a hat, bring sunscreen, and have plenty of water. Weekends can be very crowded.

The Basilica De Santa Maria De Guadalupe is one of the most important religious shrines in Mexico. Rooted in Mexican culture, Our Lady of Guadalupe is the patron saint of Mexico and a symbol of unity and justice. Her legend dates back to the 16th century and continues to be an essential part of Mexican life. In 1810, the Virgin of Guadalupe’s image became the symbol of the armed rebellion against Spanish rule. In the Mexican Revolution of 1910-1920, the image also played an essential role in the Mexican Revolution. Millions are named Guadalupe after her — with Lupe for short.

The old Basilica dates back to the early 18th century. When the foundations began to crack, the Modern Basilica was constructed between 1974 and 1976. It is a circular building where one can view the image of the Virgin from anywhere throughout the church. One can still step into the old Basilica and admire the interior.

Pro Tip: For more information, read up on everything you need to know about Our Lady of Guadalupe Day, which includes more on the Basilica’s history and practices observed there on December 12 and throughout the year.

Xochimilco’s floating gardens are miles of historic waterways running through the neighborhoods, thus giving this area the name the Venice of Mexico. It is a UNESCO World Heritage Site.

As soon as you enter the area, there is an atmosphere of fun and frolic! Colorful flat-bottomed boats called trajineras are available for rent. The vessels sparkle with artificial flowers amongst the decorative woodwork. One can buy food there or, as my hostess did, bring food and drinks. Once afloat, other trajineras carrying mariachi bands will offer to hook up and entertain you.

One of my friends exclaimed, “Happiness is an afternoon floating the canals of Xochimilco!” That it certainly is!

Located only about 12 miles from the city, the Barrio De San Angel is home to the 17th-century El Carmen Monastery, popular Saturday art markets, unique architectural districts, and a yearly flower festival.

The geography of the area is unique. It is composed of volcanic rock from the eruption of the Xitle Volcano approximately 2,000 years ago. You will find 350 native plant species, 100 bird species, 40 mammal species, and 20 reptile species in this ecological reserve.

The complex of El Carmen consists of the church, the monastery, and school buildings, now all part of the museum. It houses one of the most important colonial art collections in all of Mexico. As well, the museum has collections of sculptures, documents, and furniture of the period. In the basement crypt are mummies of former wealthy citizens.

The area is home to the annual flower festival, Fiera de las Flores, held each July. The festival has both indigenous and Catholic elements and has delighted participants for over 170 years.

The weekly Saturday Art Market is held at the Plaza de San Jacinto. Take time to stroll the side streets and enjoy the unique architecture of wealthy citizens’ former homes.

University City, located in the southern part of Mexico City, is home to the National Autonomous University of Mexico (UNAM). Built on a lava layer from the Xitle eruption of 100 A.D., the 2,500-acre complex consists of the Olympic Stadium, a Cultural Center, an ecological reserve, the Central Library, several museums, and approximately 40 faculty buildings. It is named a UNESCO World Heritage Site.

The most notable buildings are the Central Library and the Olympic Stadium.

The Central Library has mosaics covering all four walls. Designed by Diego Rivera, the mosaics depict Aztec and Spanish motifs and the UNAM coat of arms. It is the most massive mural in the world.

The Olympic Stadium was constructed in 1952 and hosted the 1955 Pan-American Games, the 1968 Summer Olympics, and the 1986 FIFA World Cup. Excavated lava rock forms the base and the structure features reliefs by Diego Rivera.

The Museo Virreinato, listed in the UNESCO World Heritage Trail of Old Colleges, is located approximately 20 miles from Mexico City. Formerly the 18th-century College of San Francisco Javier, this was a major educational center. The museum houses one of the largest collections of religious and daily life artifacts from the colonial period.

Step into the Church of San Francisco Javier. No longer used for religious ceremonies, the church is now part of the museum. In the church, marvel at the collection of one of the most important altarpieces in Mexico. The Spanish Baroque interior will amaze you.

Take time also to stroll the extensive gardens — more than 7 acres of beauty.

We enjoyed lunch at Casa Mago Restaurante-Bar, just off the central plaza.

The buffet was a feast of traditional Mexican dishes. My favorite was the chicken mole — the best I had tasted.

These activities are only a taste of what Mexico City has to offer. At our farewell dinner, my heart melted when our hosts exclaimed, “Thank you for coming to Mexico. You have all heard so many bad things about Mexico, and we are glad you came to visit to see the real Mexico.” Several times I was told, “You are now family. Come and stay with us any time!”

The history and traditions are fascinating. From pyramids to baroque churches to floating gardens to incredible museums, there are activities for all interests. With 35 world heritage sites, Mexico has more than any other country in the Americas and has the seventh-most globally.

I was there for a week and can hardly wait to return!

I highly recommend reading Michener’s Mexico before your trip. It helped me to understand many customs and traditions.

In winter, the poinsettias are magnificent. Look for poinsettia bushes in the family gardens and yards. Next door to our host, there was a bush at least 8 feet tall and 4 feet wide.

The distance to some sites might be small in terms of miles, but there tends to be very heavy traffic. Sit back and just enjoy the venture!

Winter weather in Mexico City ranges from the low 40s to mid-70s. It can be chilly at times, so it’s best to dress in layers. 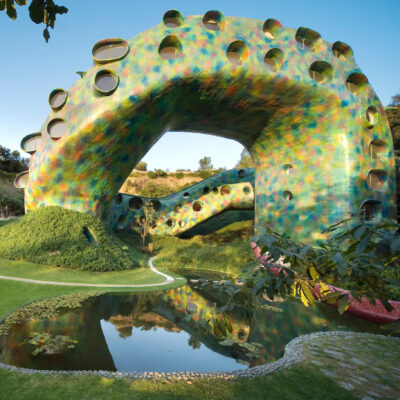 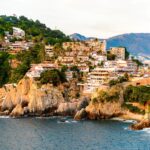 MexicoAcapulco Versus Cancún: 5 Key Differences To Know Before You Visit 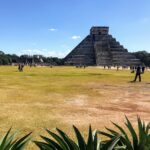 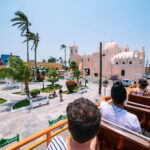