Home to the largest concentration of hoodoos (tall columns of rocks) on Earth, Bryce Canyon National Park is one of the most-visited national parks in the United States. Contrary to what its name suggests, Bryce is not one canyon, but a series of natural bowls filled with these hoodoos, carved into the edge of a high plateau.

This otherworldly geology is enough of a reason to visit, but it’s not the only one. Far from major cities and in the higher elevations of the American Southwest, Bryce offers dark skies for stargazing and lots of wildlife.

More than two million people visit Bryce each year, and most stay at least one full day, if not longer. No matter how long you stay, some planning will help you make the most of your visit.

1. Each Season Has Its Pros And Cons

The best time to visit Bryce Canyon National Park is summer, between June and September, when temperatures are between the high 60s and low 80s. Because of the pleasant weather, this is also the high season. If you’re planning on visiting during this time, book in advance and prepare to encounter crowds. In July and August, you can expect frequent thunderstorms, but they don’t last long.

The shoulder seasons of May and October are a bit cooler — reaching freezing temperatures at night, but still pleasant during the day.

If you don’t mind colder temperatures and want to visit during a quieter time, you can go in April or November. Temperatures during this time are lower but still pleasant during the day — generally in the 50s during the day, and at times reaching the high 60s, but below freezing at night.

Bryce is beautiful in the middle of the winter, when it is covered with snow, and you might find yourself alone there. The restaurant and the lodge are closed, however, so if you visit during this time, make sure you have a place to stay and eat outside the park.

2. There Are A Variety Of Accommodation Options

The best place to stay in the park is the historic Lodge at Bryce Canyon, built in 1925 between Sunset and Sunrise Points. The restaurant at the lodge is also the best place to eat, but you don’t need reservations for dining. However, you should book a room at the lodge in advance, up to a month ahead at the very least.

If you’d rather camp, you have a choice of two campgrounds, both with plenty of room for tents and RVs, though they have no hookups. You don’t need to reserve a spot, but plan to get there early in the day, since they may fill up by the afternoon. Accessible campsites are also available, but you’ll need to book those in advance.

If you can’t get a room at the lodge, or if you don’t feel the need to stay within the park’s boundaries, you’ll find plenty of hotels close by, from 2 to 10 miles from the park’s entrance — some even close enough to ride the free park shuttle. These range from luxury accommodations to budget hotels and motels. They have amenities, including television and Wi-Fi, that are not available at the lodge.

3. You’ll Have To Drive A While To Get There

Bryce Canyon National Park is in Utah, about 270 miles (a 4-hour drive), from Salt Lake City, Utah, and Las Vegas, Nevada. No matter what direction you are coming from, you’ll need to get to U.S. Route 89, then take the Utah Scenic Byway 12 east, and finally head south on Utah State Route 63.

You’ll be driving for hours in the middle of nowhere, passing through small towns that seem to have been forgotten by time. You’ll also drive through some of the most beautiful, otherworldly parts of the Southwest.

4. Stop At The Visitor Center Before Exploring The Park

Your first stop in the park should be the visitor center, where you can learn about the geology, flora, fauna, and history of Bryce Canyon.

Visit the museum and the hands-on exhibits to learn how the iconic hoodoos were formed and about the different layers of life in and around Bryce Canyon, from fossils to current wildlife.

At the visitor center, you can pick up a map of the park and find out what ranger programs are being offered.

If you are visiting between April and October and lodging outside the park, leave your car and take the free shuttle to the visitor center.

Pro Tip: Fill up your reusable water bottle at the visitor center. If you didn’t bring one, it’s worth buying one at the gift shop, since you can fill it up at all the trailheads and viewpoints.

5. Take Advantage Of The Ranger Programs

The park offers daily ranger programs, from guided rim walks to geology talks to evening programs at the lodge and the campgrounds. Check out the ranger programs board at the visitor center if you’re interested.

While for most programs you can just show up, a few require that participants sign up in advance.

The 18-mile scenic road through the park travels along the rim from the entrance on the north side to the higher elevations on the south side. You can drive into the park and stop at the viewpoints, or leave your car at the visitor center or the lodge and take the shuttle during the busier times. This will allow you to avoid congestion and other traffic frustrations.

Pro Tip: Since all viewpoints and trailheads are on the left as you drive in, take the scenic road to its farthest point, Rainbow and Yovimpa Points, and then stop at the other viewpoints on the way back, avoiding left turns from the road.

7. Each Viewpoint Is Worth A Stop

Each viewpoint highlights a different part of the canyon, and each is worth a stop. At Rainbow Point, you’ll see the whole park stretching out before you to the north. Yovimpa Point showcases the Grand Staircase with its different layers of rock.

Stop at the Natural Bridge Viewpoint to see one of the larger red-rock arches in the canyon, visible from the parking lot. Farview Point, as the name suggests, offers spectacular views of famous landmarks that make up the Grand Staircase, including the Kaibab Plateau at the North Rim of the Grand Canyon.

Bryce Point, Inspiration Point, Sunset Point, and Sunrise Point are not only the most spectacular but also the most popular viewpoints — the only ones the shuttle stops at. Bryce Point offers a scenic view of an amphitheater full of hoodoos and is famous for its sunsets. Inspiration Point showcases three layers of the main amphitheater, providing different perspectives. Sunset Point offers views of some of the most famous hoodoos in the park, including the Silent City and Thor’s Hammer. Sunrise Point offers views of other famous hoodoo formations, including Boat Mesa and Sinking Ship.

8. Make Time For The Rim Walks And Hiking Trails

Many people visit Bryce Canyon National Park to hike or at least walk along the rim, and there are plenty of trails to choose from for visitors of all fitness levels.

The Rim Trail runs 11 miles along the rim, but the most popular and spectacular part of it is only a mile long and paved — the part from Sunrise Point to Sunset Point. Benches along the way offer visitors opportunities to sit and enjoy the view of the amphitheater below.

Another short trail, the Bristlecone Loop, starts at Yovimpa and Rainbow Viewpoints at the end of the scenic loop. Also a mile long, the trail goes through a pine forest to the edge of the canyon and offers gorgeous vistas.

The easiest and shortest trail leading inside the canyon is the 1.8-mile Queens Garden Trail, which starts at Sunrise Point. The Queens Garden is the name given to a series of hoodoos at the end of the trail. The formations are said to resemble Queen Victoria overseeing her garden — you can see it with a bit of imagination.

If you’re interested in exploring the canyon on horseback — or on a mule — the stables by the lodge offer 2- and 3-hour guided rides into the canyon. You’ll travel down into the Bryce Amphitheater and ride along a dedicated horse trail and the Peek-A-Boo Trail.

You can book a ride at the lodge or at the visitor center. Rides are available from April 1 to October 31.

10. It’s Best To Spend More Than One Day There

The best way to visit Bryce Canyon National Park is to spend two or more days there and stay at the lodge (or at one of the campsites). Walking out early in the morning or at dusk is the best way to encounter wildlife, most likely deer grazing by the lodge. Watching a sunrise, sunset, or moonrise on the rim is an unforgettable experience, and the dark skies are spectacular.

But those who can only spend one day in the park should still drive the scenic road to the end, stop at Yovimpa and Rainbow Points as well as the Natural Bridge, and then spend most of the time at Sunset, Sunrise, Inspiration, and Bryce Points. For a short and easy stroll, walk the short part of the rim trail between Sunrise Point and Sunset Point. 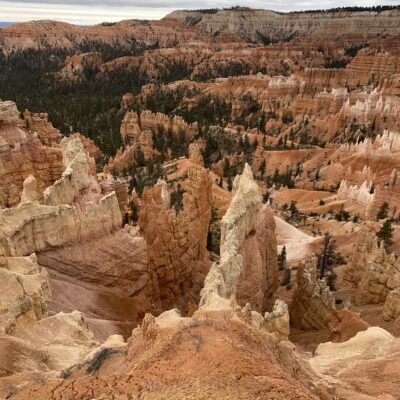 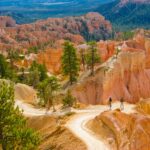 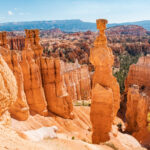