New York is one of the food capitals of the world. Culinary delights — expensive and inexpensive — can be found in every nook and cranny of the city. Some New York specialties are well known. Think Katz’s, Balthazar, Carmine’s, Momofuku, Sylvia’s, or any one of a dozen places. Even the ubiquitous Gray’s Papaya and Nathan’s hot dog carts are an essential New York experience.

If you want to have an even more local culinary experience, this list is for you. Here are a handful of local favorites from a native New Yorker. Price ranges vary (and “expensive” means something different to New Yorkers than it does to many others). These are the places I love for comfort food or a celebratory meal.

Diners are a dying breed in New York City. Unfortunately, many have closed over the past decade. One that remains is the Pearl Diner. Located in the financial district and surrounded by newly constructed high-rise offices, Pearl Street has been serving food since the 1960s. The prices don’t seem to have changed much and neither has the decor.

If you are looking for simple, good, and inexpensive diner food and you are in the Financial District or the South Street Seaport, Pearl’s is a short walk. You’ll find this small, one-story diner on Pearl Street with a familiar Diner sign on the outside. Breakfast sandwiches ($3 to $5) and burgers (around $8) are standard fare here. The grilled chicken salad is good, too.

Empire Diner has been around since the mid-1970s. The food is 1970s influenced with a modern twist. Matzo ball soup, burgers, eggs, and black-and-white cookies are served alongside poke bowls and pressed kale juice. Above the silver-sided diner, you’ll see one of the best street murals in New York: a colorful piece by Brazilian artist Eduardo Kobra with profiles of Andy Warhol, Frida Kahlo, Basquiat, and Keith Haring. A burger at empire will run you $18. The High Line and Chelsea art galleries are a stone’s throw away.

Cuban-Chinese restaurants are very well-known to native New Yorkers, but not so well-known to travelers. Cuban-Chinese cuisine, sometimes called Chino Latino, was created by Chinese immigrants in Cuba in the mid-1880s. After the Cuban revolution, many left the island and made their way to New York. Thankfully, they brought the cuisine with them. Think pork with black beans (but the black beans are Chinese, not Latin) or Chinese pork dishes with plantains. These are old-style Cuban-Chinese restaurants, not the newer fusion (and more expensive) version.

Flor de Mayo, a pioneer in Cuban-Chinese cuisine, is located on the Upper West Side and has been around for decades. They make excellent Peruvian chicken in addition to Spanish and Chinese dishes. The 484 Amsterdam Avenue (between 83 and 84) location is currently undergoing renovations.

La Dinastia is another good choice.

Many travelers go to Katz’s for pastrami sandwiches when they are in New York. And it does have the best pastrami in the city. It also has the longest line in the city — often a 2-hour wait on the weekend.

Instead, try going to Yonah Schimmel Knish Bakery for authentic kasha knishes, egg creams, and blintzes. Yonah Schimmel has been in the area since the early 1900s, and the decor looks like it’s never changed. The knishes are still baked in the basement and are brought up via dumbwaiter.

The knishes won’t be the square ones you’ll see at the hot dog stands. Yonah Schimmel’s knishes are round with a thin shell. Traditional varieties are kasha (buckwheat) and potato. There are many other varieties, including spinach, red cabbage, and mushroom, too. And the cherry cheese blintzes are very good.

By the way, an egg cream has no eggs — it is made with seltzer and chocolate syrup. If you’ve never tried one, Yonah Schimmel’s is the perfect place for a first taste.

Did you know that New York has Chinatowns in Manhattan, Queens, and Brooklyn? Or, that Koreatown is around the corner from Penn Station? Or that Curry Row is on East 6th Street in the East Village? New York is obviously a great place to expand your Asian culinary experiences. Here are some of my favorite New York restaurants known for serving diverse Asian cuisine.

Rasa in the Village serves some of the best Malaysian food in the city. Malaysian food is one of the original fusion cuisines. It emerged long before fusion became so popular. It brings together Chinese, Indian, and Malay spices and flavors. If you’ve never eaten it, your New York trip is the time to do so.

If you like spicy food, try the spicy rendang beef or chili crab, Singapore’s national dish. If you prefer noodles, the slightly spicy Drunk Man and the savory glass noodles are excellent choices. Rasa also serves sushi and Thai food. The restaurant is mid-range in terms of price; appetizers run $7 and up while noodles cost $15 and entrees start at $22.

Le Colonial is a favorite for upscale Vietnamese cuisine. The service is impeccable and the setting tranquil and calm. This is not a place for Vietnamese street or budget food. Le Colonial is a splurge. Entrees are delicately seasoned and savory, and the lotus salad is worth your consideration. The pre-fixe lunch ($26) is a good way to sample dishes without breaking the bank. The dinner pre-fixe is $42 and includes dessert. Le Colonial has a full bar and an a la carte menu as well.

Want to try Korean food? Or maybe you already love it and are in the mood for kimchi or bibimbop? Koreatown is the place to go.

Try The Kunjip for its lunch specials, which include side dishes of kimchi, bean sprouts, and purple rice. It’s a great introduction to Korean food. If you haven’t had kimchi, it is vegetables (generally cabbage) that have been pickled and fermented. It has a sour and slightly spicy taste.

Looking for a sweet dessert? Slip into Food Gallery32, where you can find churros, Chinese bubble tea, or even a green tea lava cake!

Or, pop into H-Mart, a Korean grocery store at 38 W. 32nd Street, for some ice cream or crunchy snacks like anchovies fried with peanuts.

Feel like having barbecue at midnight after an event at Madison Square Garden? Check out New Wonjo for their excellent beef and authentic barbecue. The restaurant stays open late — until 4 a.m. on weekdays and 24 hours on weekends.

Tasty Hand-Pulled Noodles has the best hand-pulled noodles in Chinatown. Hand-pulled noodles are chewy and — surprise! — pulled by hand. You can look into the kitchen and watch them being made. Not much to look at, this tiny restaurant only has a few tables and serves knife-peeled noodles, wide rice noodles, pan-fried noodles, dumplings, and other rice dishes. Stick with the noodles and you won’t go wrong. The food is a little greasy but very satisfying. A bowl of noodles costs around $6.

Going to The Burger Joint in the exclusive Parker New York always brings a smile to my face. The Presidential Suite in the Parker Meridien will cost you $1,700+ a night. A burger at the Burger Joint will run you just about $9. When you walk into the well-appointed lobby, look to the left and you’ll see some heavy, long curtains. Behind the curtains is the burger joint. And we mean joint. Picture wood paneling with carved initials and vinyl seating.

This secret spot is known to New Yorkers and can have a line at lunchtime. There are no reservations. The burgers, fries, and milkshakes are all very good. And the brownies are to die for. A simple meal of burgers, fries, a beer, and a brownie will cost you less than $25. And, you get to eat behind the curtain.

An Eatery In Manhattan’s Most Exciting New Neighborhood

Hudson Yards is the most exciting new neighborhood in Manhattan. The climb to the top of the Vessel — a unique structural landmark — will afford you a very interesting view of the city and New Jersey. After all that climbing, you’ll be hungry, and if none of the restaurants inside Hudson Yards are calling out to you, you can take the stairs going down to street level. Look for Mercado Little Spain. You’ll be happy that you did.

Created by internationally recognized chef Jose Andres, Mercado Little Spain is an upscale Spanish food market. It has everything from amazing grilled foods at Lena to seafood at Mar to pork sausage (and everything else) at the Spanish Diner. If you are looking for lighter fare or something snackable, the empanadas are unique and delectable.

Bon Bons In The Big Apple

There are so many hidden gem restaurants in Manhattan that it is hard to narrow them down to these few. Try some of these and spend time discovering more on your own!

Big Apple bound? New Yorkers reveal what travelers need to know about transportation in the city, plus 25 things to expect when visiting New York City for the first time. 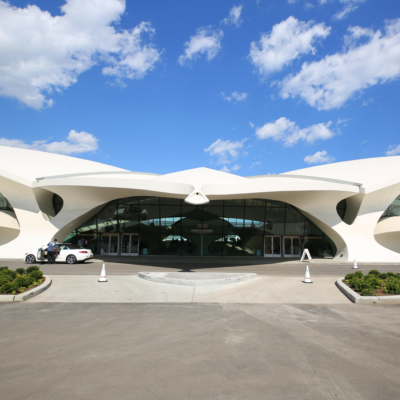