Poland’s second-largest city is home to numerous stunning spots for both visitors and locals to enjoy. From its gorgeous natural features and intricate architecture to its UNESCO World Heritage sites, Krakow is certainly aesthetically pleasing.

Here are some of the most beautiful places in the historic city. They’re sure to inspire a trip to this fascinating place!

Krakow’s Rynek Glowny, or market square, is the heart of the city’s Old Town. It’s the largest medieval market square in all of Europe and dates to the 13th century. Krakow’s Old Town was one of the very first UNESCO World Heritage sites.

The square is home to The Cloth Hall, a Renaissance-style masterpiece and longtime trade center that now houses a museum. The square’s historic townhouses and colorful market stalls are also quite pleasing to the eye. Watching over the entire area is the spectacular 14th-century Gothic Saint Mary’s Basilica. Be sure to take a look inside — the colorful interior is just as beautiful as the exterior.

Poland’s largest river, the Vistula, winds its way through the city of Krakow and creates pretty views throughout. The most striking and accessible spot to enjoy the water is on the river’s west side at the aptly named Vistula Boulevards. This promenade is a popular, scenic, and family-friendly spot. Summertime travelers can experience a little extra enchantment at the city’s weekend fountain shows.

Another of Krakow’s gems is the hauntingly beautiful Rakowicki Cemetery, often compared to the famous Paris cemetery of Pere Lachaise. The 100-acre property is home to lush greenery, intricately carved tombs, and pretty statues, but its most famous residents are the parents and brother of Pope Saint John Paul II. The beloved pope was born Karol Jozef Wojtyla near Krakow and lived in the city for much of his adult life. The cemetery is a site of pilgrimage for Catholics looking to follow in the saint’s footsteps.

Be aware that Rakowicki Cemetery is in the Old Town of Krakow, but not the historic Old Town we’ve previously mentioned.

Now an art museum, the remarkable Wawel Royal Castle was once the residence of Polish kings. The castle itself is situated on the picturesque Wawel Hill, which is also home to the 14th-century Gothic Wawel Cathedral. The site is remarkable for its splendid exterior, but also for the treasures housed within. These include Ottoman tents, Renaissance paintings, and Meissen porcelain. Additionally, the museum boasts collections of jewelry, Oriental art, and tapestries. The castle grounds are frequently the site of outdoor music events.

This large and pretty park encircles the Old Town. Planty Park is known for its fresh flowering blooms, eight varied gardens, and tall pine trees. If you’re in Krakow during the warmer months, settle in on one of the park’s numerous wrought-iron benches and enjoy a respite from the hustle and bustle of the city.

Planty Park is also home to a beautiful fortification called the Barbican. This outpost dates to the 1400s and used to be connected to the city walls. There are only a handful of these architectural features left in Europe, so it’s very cool that one remains in Krakow.

This stone tower in the Old Town was constructed in the 1400s in the Polish Gothic style. Named for a Roman Catholic saint, the gate still features a pretty chapel and detailed carvings within its defensive walls. The beautiful attraction is all that remains of the city’s old wall; the rest was destroyed by the Austrians in the 1800s. For an especially cool view, visit Saint Florian’s Gate at dusk.

You might be wondering why a 700-year-old salt mine would qualify as a beautiful place, but this suburban Krakow mine is truly something special. Over a million tourists visit the site each year! The Wieliczka Salt Mine houses crystal grottos, healing saline baths, a museum, and even its own hotel. It’s also home to the beautifully detailed Saint Kinga’s Chapel, an underground sanctuary made entirely of salt.

Visitors can take either the Miner’s Route, the Pilgrim’s Route, or the Tourist’s Route through the mine.

Whether you prefer old castles or green spaces, you’ll find plenty of places to explore in this delightful urban center. 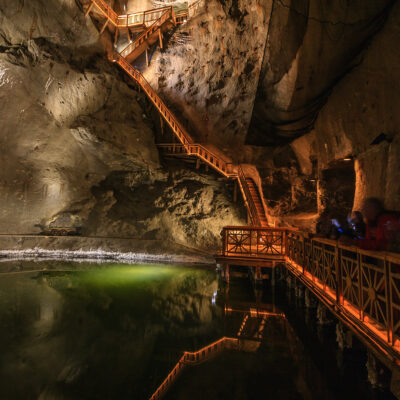 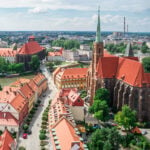 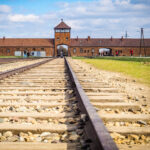 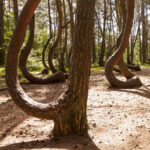