8 Lesser-Known Things To Do In Saint Augustine, Florida

You might think that Saint Augustine, the oldest city in the United States, has already been thoroughly explored — but it hasn’t. Initially a Spanish colony, this 16th-century town is full of surprising and interesting attractions beyond the stunning-yet-touristy Castillo de San Marcos, Flagler College, and Lightner Museum.

A 45-minute drive south of Jacksonville, Florida, Saint Augustine’s colonial streets were never meant for millions of visitors per year. But you can’t blame the tourists who flock to Saint Augustine from around the country for wanting to experience a piece of Florida’s historic coast.

To experience the calmer side of Saint Augustine, visit these eight lesser-known — but equally exciting — attractions in town.

While Castillo de San Marcos — one of the top attractions in Saint Augustine — is located near the Colonial Quarter, the lesser-known Fort Matanzas National Monument is south of town. Both forts, built to guard against attacks, are made from the same material, coquina — a porous mixture of shells and stone that doesn’t crack under enemy fire. Simpler and more picturesque, Fort Matanzas consists of two rooms and a rooftop area that provide beautiful views of the inlet.

As is true of many attractions in Saint Augustine, Fort Matanzas has a long history. Although the fort itself was constructed in 1742 to protect the then-Spanish city of Saint Augustine from the British, the land on which it sits has long been significant. In 1565, the site witnessed the execution of 250 Frenchmen in a dispute for the land. Ever since, the area has been referred to as the Matanzas Inlet, matanzas meaning “slaughter” in Spanish. Live reenactments, such as musket demonstrations, are common at the fort, making it a unique attraction for visitors.

Fort Matanzas is located 15 miles south of Saint Augustine and requires a short 5-minute ferry ride to reach. Complimentary ferry tickets can be picked up at the Fort Matanzas Visitor Center. The fort is open and free of charge from 9 a.m. to 5:30 p.m. every day. Altogether, it should take 2 to 3 hours to fully explore this historic site.

The Historic Peña-Peck House in the Colonial Quarter of Saint Augustine is one of the oldest surviving buildings in the town; it was constructed in 1750.

The first residents were the members of the Peña family; after that, the British occupied the city for 20 years, and various high-ranking officials lived in the home. Later, the house was purchased by Seth Peck, whose granddaughter was the last owner. She died in 1931 and willed the home to the city so that others could see and appreciate it. The beautiful antebellum home is one of Saint Augustine’s hidden gems.

The Historic Peña-Peck House is open Monday through Saturday from 10:30 a.m. to 5 p.m. and Sundays from 12:30 p.m. to 5 p.m. There is no charge for tours, but donations are appreciated.

The Floridian is tucked away on the less-trafficked Spanish Street, far from the busy main pedestrian street. Stay alert, or you may walk right by it! The front entrance looks like the back entrance, and the restaurant sign lies partially hidden beneath overgrown greenery.

Popular with locals but not as well known to tourists, The Floridian features a delicious seasonal menu with fresh takes on Southern classics. Po’boys, shrimp and grits, and green-fried tomatoes all make an appearance on the menu. However, one menu item that rises above the rest is the Biscuit and Belly, which includes pieces of juicy pork belly, one large buttermilk biscuit, and a variety of sauces and cheeses that will delight anyone’s taste buds.

In addition to its fantastic meals, The Floridian also wows with its innovative and strong cocktails. With its excellent bartenders, talented cooks, and tropical interior, The Floridian is a great spot to grab lunch (11 a.m. to 5 p.m.) or dinner (5 p.m. to 9 p.m.). The restaurant is open every day except Tuesday.

While most people opt to stay in the Colonial Quarter, it’s worth driving across the Bridge of Lions to see Saint Augustine Lighthouse on Anastasia Island.

The unique black-and-white striped lighthouse stands 165 feet tall, or about 14 floors high. Constructed in 1874, the lighthouse is still in operation and guides ships along the Florida coast during stormy weather. For a neat panoramic view of the Saint Augustine area, climb the 219 stairs to the outdoor balcony. On each level, fun facts about the lighthouse keep you from thinking about the burning in your thighs! Plus, the view at the top is well worth the workout.

The lighthouse is open every day from 9 a.m. to 7 p.m. It costs $12.95 to walk around the grounds and summit the lighthouse. Fans of the paranormal will love the ghost tours that are held during the fall ($25).

Looking for a fun and quirky attraction? Don’t miss a chance to kiss your loved ones under a love tree! What is a love tree? In Saint Augustine, the term refers to two different types of trees that grow into, around, or on top of each other. They may even look like they are embracing one another!

Although several of these natural phenomena can be found in Saint Augustine, the most popular of the love trees is located at the intersection of Cordova Street and Orange Street. According to legend, a couple planted the two trees next to each other as a sign of their love. Those trees have now embraced, with the palm tree growing from the center of the oak tree. It’s said that those who kiss under the love tree will stay together forever.

While most folks sign up for the Saint Augustine Distillery tour, head to the Ice Plant Bar for a snack and drinks instead. Although the distillery and the bar are located inside the same building — a historic factory that used to manufacture commercial ice for fishermen and shrimp boats — the Ice Plant Bar has quite a different flavor!

In line with the building’s history, Ice Plant Bar’s handcrafted cocktails come with house-made ice cubes — three different types, to be exact! Additionally, the bar uses fresh and healthy ingredients from local farms to make its signature dishes, which include pretzel bread, heirloom tomato pie, and shrimp and grits. The industrial features of the space, such as the original bridge crane, steel ice trays, and sleek concrete walls, are all part of the bar’s charm.

A unique way to experience Saint Augustine is from the water. Take a sail on the Schooner Freedom through Matanzas Bay and out into the Atlantic Ocean for an unforgettable experience.

Assembled in 1982 in Norfolk, Virginia, the Freedom is a reproduction of a 19th-century topsail schooner. With two masts, it’s the first sailing boat of its kind to be allowed by the Coast Guard to give sailing tours. The ship is operated by a local family, and the crew members take special care to make the tour comfortable and enjoyable for everyone. You may even get a chance to help them hoist the sails!

The Schooner Freedom offers a variety of sailing adventures. In addition to day and sunset cruises, there are midnight sails, full-moon sails, and dolphin-scouting sails. The 2-hour sunset sail is by far the most popular and includes complimentary wine, beer, and nonalcoholic drinks ($55).

This is your chance to visit Southern Spain without leaving the States! Built in 1883 for Franklin Webster Smith, the Villa Zorayda, a reproduction of the Alhambra palace in Granada, is one-tenth the size of the actual building.

The beautiful Moorish Spanish Revival architectural style of Villa Zorayda became popular in Saint Augustine after the structure’s completion. After Smith lived out his days at the Villa, it became a casino. Later, it was purchased by the Mussallem family, who opened the residence to the public as a museum in 1933.

The family collected interesting and unusual artifacts that make the Villa Zorayda Museum a true hidden gem. For example, you can view a mummified foot that is said to have been broken off by grave robbers in Egypt. Additionally, a 2,400-year-old cat rug, made from thousands of cat hairs from felines that lived near the Nile River, hangs on one of the walls. 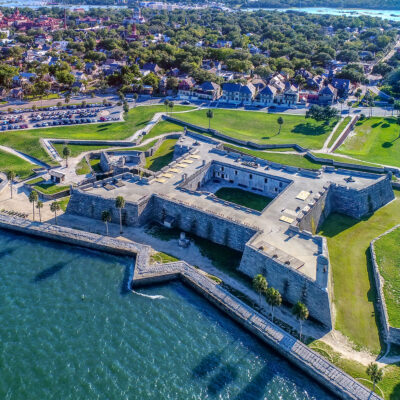 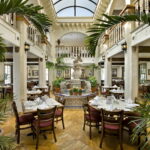 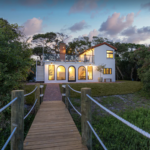