Linda Fairbairn explored travel sketching, blogging, scrap-booking, social media, creating photo books in order to preserve the memory of her adventures. But most recently, she’s created ‘story-maps’. These are not only fun to produce but are a joy to peruse in years to come with no further input or editing. ‘Story-Maps’ are a mind map of each days’ events made up of doodle like cartoons and icons to form a visual keepsake.

Linda created Journey Jottings, and her signature product — the Journal Map — 15 years ago to help travellers keep that vacation smile on their face long after their trip is over. Her hand-drawn pictorial map of Australia is designed to dot one’s route on the map and jot tales in the boxes that form a border around the edge, highlighting their memories… forever.

Linda was kind enough to answer some of our questions below.

Linda: As soon as I left school I was busting to go out and explore the world. Luckily (at 18) I met my future husband who had the same idea! Our first foray took us to Scandinavia’s Nord Kapp; and after a winter scrimping and saving in a bedsit in London’s Abbey Road, we flew to Singapore where we took a rubber cargo boat to Sumatra and island hopped down through Indonesia and Timor to Australia.

The hook is the challenge and fun of the unknown, with the reward of getting a glimpse into the diverse ways of life that exist across the globe. It’s like a treasure hunt where you have no idea where you’re going to be taken, but with a sprinkle of serendipity, wild charades being mimed out with locals whose both language and alphabets are foreign, culminates in clues carrying you to places you could never dream of. I wonder how those early trips would have panned out if we’d started our travelling life surfing the net on a sofa in a sitting room?

Linda: Yes! The longest lasting part — the travel memories — which if nurtured will last a lifetime! We put so much time and effort into dreaming about where to go, planning on how to get there, deciding where to stay, it seems only right that a modicum of effort be also applied to recalling our exhilarating experiences in more than a few snaps — or boring the pants off ourselves with pages of non-descript words.

Linda: A camper bus road trip(s). Every one I’ve ever taken has been brilliant, whether in Australia, New Zealand or overland! There is nothing better than heading off into the unknown, with eyes squinting towards the horizon wondering what the next rise will reveal. It’s a bit like chasing a rainbow… except you get to find some real golden gems of places along the way!

Linda: To do a camper bus trip through the mountains, glaciers and lakes of the Canadian Rockies — particularly the Icefields Parkway, which travels between Banff and Jasper National Parks.

Linda: Sketch-noting/story-mapping materials. A Lamy Joy ink pen with a selection of coloured inks, some watercolour pencils and a water brush (that has a water reservoir) for blending the colours; and I love the way the concertina ‘Japanese’ Moleskine journals fold out meaning cram packed days can sprawl out over several pages and still be connected! I know lots of people say — Oh, but I can’t draw — but creating symbolic doodles is as inherent in us as learning to walk!

Linda: Stop. Stop for 15 minutes each day, maybe over a hot or cold drink, and doodle a few cartoon-like symbols to represent two or three moments from your day. As Cesare Pavese said, “We do not remember days, we remember moments.” So while front of mind, notating particularly a few emotional connections from your day’s experience will prove to be wonderful memory joggers in years to come.

Linda: Urban Sketchers, whose tag line is ‘See the world, one drawing at a time’. There are over 200 chapters across the world. Check out their Chapters page to see if there could be a sketching get together in a place you are visiting — brilliant way to meet some locals and slow down to observe the city from a different perspective.

Moment Sketchers, a global sketching community. The first full weekend in the month, sketch wherever in the world you are and upload with the #momentsketchers.

Amanda of Not a Ballerina: A Thinker and a Traveller records The Thoughtful Travel podcast where each episode she interviews travellers about their experiences in relation to that week’s topic.

And if you want to pick up a few sketch noting techniques Verbal to Visual is great!

Linda: On the edge of the remote Great Sandy Desert in NW Australia, hundreds of kilometres down a red dirt road. My husband and I had a 3-month contract with a mineral exploration company, where our accommodation was a tent and my office was the annex to that tent where each day in the 40C dry heat I drew up geological maps of the region. Our supplies were flown in each week on a tiny plane that landed on the rusty coloured sand between the silvery green spiky spinifex grass.

Linda: When travelling down the Mekong River, we met a Thai guy who was employed by the government to teach Thai to the hill tribes up in the golden triangle of Laos, Thailand and Burma (now Myanmar). With some mime he invited us up to one of these villages where after a day’s walk through thick forest we arrived and were duly introduced to the chief. In our honour, a bantam sized chicken was promptly killed and fried, and its entirety was chopped into portions to be presented to us on a plate. Nothing was going to go to waste, so while the yellow feet were prominently obvious, the nugget my husband selected was not so readily recognizable until he crunched into it and upon looking down at his fingers saw the remains of its beak!

Linda: Join a Frequent Flier membership where you can connect earning points to a credit card. For us in Australia going virtually anywhere by plane means a long-haul plane ride, so being able to upgrade to Business Class with only points is a huge financial and comfort bonus. By simply using your card for groceries, petrol and general living expenses, it’s surprising how the points accumulate. It won’t happen overnight, and it’s critical the balance be paid off without fail every month, but since starting to do this I have been able to fly from the UK to Canada (9 hour flight), and later Los Angeles to Brisbane (14 hour flight) both in Business Class for the price of an Economy ticket. Woohoo!

Linda: Yes, that they can’t draw their travels! Whenever I show people my story maps they always say, “What a great way to record your trip,” followed by, “But of course I don’t have an artistic bone in my body.” It has been proven that drawing is as inherent in us as getting up and walking! Yes, we all follow the same developmental traits and it is only the critical eye of our peers at about the age of 10 that puts a dampener on our creative endeavours.

From years of no practice I suspect you will be a little rusty. But you can do it and very quickly you’ll be producing visual prompts that will totally delight you in years to come when that moment for nostalgia strikes. Link for further reading: I Can’t Draw.

TA: Have you ever met someone while traveling who changed your life? Who were they?

Linda: Serendipitous encounters with people on the road are part of the magic of travel. Travel exposes you to a potpourri of people from all walks of life that in one’s narrow daily home routine are rarely encountered.

At Darwin airport, I got into conversation with a German guy who was waiting to meet someone off a flight and who introduced me to the world of cartography. Up until that point, although I’d naturally encountered maps, I’d never considered a career in creating them. I am indebted to that chance meeting with Henning who inspired me to return to Oxford to study the art, which led to me working in bush camps in the stunning red outback of Australia where I created geological maps, before founding Journey Jottings where I now publish and distribute my hand drawn pictorial Journal Maps, which in turn helps travellers recount and recall their vacation adventures.

So maybe that chance encounter has even gone on to change your life!

Linda: Can I say — this really pisses me off — it’s tourists who leave toilet paper wherever it’s been used — and I don’t mean in the toilet! Some of the most beautiful bush walks are ruined by this littering, and it is just beyond me why everyone can’t adhere to the very simple bush walker’s code of whatever you “carry in, carry out”. It’s crossed my mind that rather like councils erect doggy waste bag dispensers at the entrance to dog walking beaches, maybe the more popular walks should have a similar dispenser for humans which states, ‘If you have a tissue in your pocket please take one of these to ensure it returns after use in your pocket’.

Thanks for taking the time to talk with us! 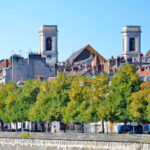 News and TipsTop 25 Places To Buy A Vacation Home