I Was Skeptical About E-Bikes — And Then I Tried One

Dan Happe
All products featured on TravelAwaits are independently selected by our writers and editors. We may earn commission when you click on or make a purchase via our links.

Riding a bike is an important part of my life. It’s a great way to get exercise, spend time outdoors, regulate my sleep schedule and energy levels, and improve my mental health. On top of all of that, cycling is one of the cheapest, most sustainable, and most enjoyable methods of transportation. I’ve even learned some valuable mechanical and problem-solving skills by working on my own bikes.

I’m several types of cyclist depending on my mood on a given day: the sensible neon-vested commuter, steel frame single-speed road warrior, or spandex-clad Strava racer. Never, though, would I ride an e-bike — or so I thought. For quite some time, I held the somewhat elitist view that riding an e-bike was “cheating.” I didn’t like the idea of being effortlessly passed on a hill by an e-bike rider while I was putting everything I had into my traditional bicycle.

Of course, this prejudice did not come from a very good place. Let’s dive into how I learned to stop worrying and love the e-bike.

The most influential factor in changing my mind about e-bikes was actually getting out and riding one. While I was house-sitting for my brother in Minneapolis — a great city for bicycling — he mentioned that I could take his new e-bike for a spin if I wanted to. I set out fully prepared to dislike the experience, but I was hooked from the first few pedal strokes.

A massive grin spread across my face as I rode through the alleyway where I was taking my test ride. There’s something completely unique about the feeling of riding a pedal-assist bike that’s a bit hard to explain. It’s sort of like waking up one morning to find your legs replaced by those of an elite Tour de France rider or being towed gently by an invisible string while you pedal. Either way, I could not deny the fun factor of e-bikes.

As I rode out into the city itself, I found myself more comfortable upping the speed, which just added to my enjoyment. Sure, I can ride my regular road bike at 25 mph, but it takes some effort. On an e-bike, I can ride that same speed while putting in less effort, freeing my mind and eyes to wander a little more. An e-bike can help adults rediscover the child-like joy of cycling that many lose touch with over the years.

The second — and more practical — factor that changed my mind about e-bikes is their ability to reduce some of the more tedious aspects of cycling. I live less than a mile from the highest point in Des Moines, Iowa, which basically means that every bike ride I go on is a hilly one. While I’ve learned how to enjoy climbing on a bike, it’s still wildly pleasant to be able to zip up hills almost as easily as I descend them.

The electric boost also makes distances feel a lot shorter. I love the feeling of a leisurely ride when I have nowhere to be, but I also ride places as a functional form of transportation. On these rides, especially when I’m late for dinner, I really love having that little boost that makes 20 miles feel like 10. Because the rides are easier, I also don’t have to worry about being sweaty and having to take the dreaded “bathroom sink shower” at my destination.

I have a friend who is in his 50s. When he saw that I was riding an e-bike, we talked about his cycling journey. Though he was a lifetime rider, he had to stop in his 40s when he developed some back issues. With an e-bike and some new accessories like a suspension seatpost, he has been able to rediscover a passion that he thought he’d never be able to participate in again. This is just one example of how electric bikes can bring joy back into people’s lives.

I’ve also talked to people who have used their e-bikes after injuries or to lose some weight with lower-intensity exercise. They’re also perfect for more casual cyclists who want to ride with friends and family who tend to keep a faster pace.

One of my favorite things about my e-bike is that I can still ride when my legs are sore from a longer or more intense traditional bike ride. To once again address the concept of e-bikes being “cheating”: anything that gets a person moving outdoors in their community is hardly cheating; it’s just leveling the playing field.

The E-Bike As A Car Replacement

Whether you are trying to reduce your emissions or simply want to insulate yourself against ever-increasing gasoline prices, e-bikes are a viable replacement for many car trips. According to the U.S. Office of Energy Efficiency & Renewable Energy, more than half of all trips taken in 2021 were less than 3 miles. I didn’t sell my car when I got an e-bike, nor do I beat myself up when I drive, but I do try to ride my bike for trips whenever I can. Not only do I save money, but I also reduce my lifestyle’s impact on the environment while enjoying the ride.

If you want to zip around town upping your smiles per hour, keep up with your kids on family rides, reduce your reliance on expensive cars, or just lose a little weight by getting some enjoyable exercise, an e-bike might be right for you.

The Aventon Aventure is one of the most popular fat tire e-bikes on the market today! Out of the box, this is a Class II e-bike (up to 20 mph), but can be easily modified into a Class III (up to 28 mph). The fat tires allow riders to smoothly glide over a wide variety of terrain, from asphalt to rocky trails, and even sand and snow. This bike is super sturdy, so even rookie e-bikers will feel comfortable hopping on and testing their newfound speed.

To learn more about e-biking, check out: 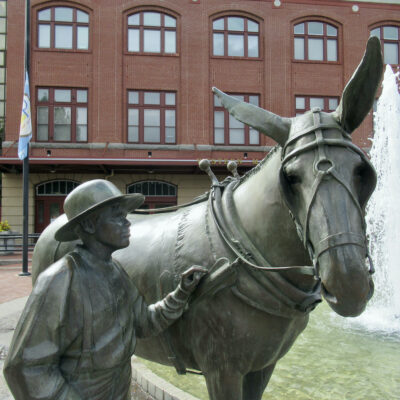 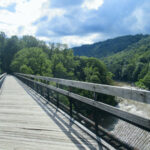 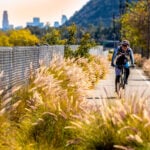 BikingThe Top 10 Bike Friendly States In the U.S., Plus Where Yours Ranks 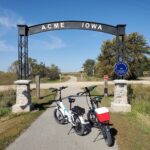