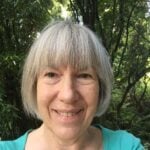 Kaikōura on the eastern coast of New Zealand’s South Island is famous for its whale-watching cruises, but there’s more to see than whales. Before going on a tour to Kaikōura, I wondered at first what we would be doing for 5 days. By the end of the tour, I had discovered new sights and wildlife and experienced a side of New Zealand life that was unfamiliar to a city dweller like myself.

My trip started with flying to Blenheim airport followed by a nearly 2-hour bus journey south to Kaikōura. The Coastal Pacific train also travels this route. Another option is to fly to Christchurch and take the bus or train north from there. For visitors renting a car, Kaikōura is on the main route between Christchurch and the inter-island ferry port at Picton, so it’s a convenient stopping point on a South Island road trip.

Many visitors stop for a few hours or maybe overnight for a whale-watching tour and then move on, but it’s worth staying a little longer. This gives you more time to explore the natural wonders of the area and enjoy the relaxed way of life in a small New Zealand town.

Note: Thank you to Driftwood Eco Tours for hosting my stay. All opinions are my own.

I’d never heard of the Hutton’s Shearwater before, probably because Kaikōura is the only habitat for this endangered species, with nesting areas high up in the mountains.

Our day learning about the Hutton’s shearwater started with an Albatross Encounters boat trip at dawn, when the birds fly from the mountains out over the sea in search of food. It was a misty morning and the weather didn’t seem promising, but the calm conditions turned out to be ideal. Our skipper, Gary, was an expert at spotting birds and knew where to look for them. He soon pointed out a flock of about 200 Hutton’s shearwaters flitting across the surface of the water. While the shearwaters were a little skittish and kept their distance, albatrosses and petrels surrounded the boat. They’re used to getting scraps from fishing boats and eyeballed us from a few feet away, hoping we’d feed them.

Heading back to shore, Gary spotted the distinctive rounded dorsal fins of some Hector’s dolphins. I’d never seen these very rare dolphins before, as they are only found around the coast of the South Island. The boat trip was very rewarding for wildlife lovers, as we saw about 20 species in less than 2 hours.

After breakfast, we set off along a road winding through the mountains to remote Puhi Peaks, home to one of the two remaining breeding colonies of the Hutton’s Shearwater. It was a bumpy ride, fording small mountain streams along the way.

At Puhi Peaks we split into two groups — those who wanted to walk and those who preferred to stay in the 4WD vehicles. I chose to walk, following our guide Wayne through the forest as he pointed out rare native plants such as tiny native orchids. After an energetic uphill walk, we reached an open plateau where we took a break to catch our breath. Across the valley, we could see where the Hutton’s shearwaters burrowed their nests into the steep mountainside.

Over lunch in the woolshed, Puhi Peaks owner Nicky McArthur told us about local efforts to protect the Hutton’s shearwater. A conservation covenant protects the area at Puhi Peaks — where about 3,000 birds nest — and volunteers have established a new nesting area closer to Kaikōura. There is now hope for the future for this endangered species.

New Zealand’s indigenous Māori people have a long history in Kaikōura. Maurice Manawatu, a local tribal leader, took us on a journey back in time. Today the Ngā Niho Pā site is a quiet green space with a public walking track, but 200 years ago, it was a battlefield when invaders from the north surprised the local Ngāi Tahu tribe. The commanding views of the coast were ideal for spotting enemies, while the earth ramparts which are still there today added extra defense against anyone who managed to slip through and climb up to the village.

Along State Highway 1, cultural artworks at a series of stopping areas explain more of the traditions and history of local Māori. Traditional motifs adorn pavements, seating, and structures, with traditional carved pou, or sculptured figures, at various points along the coast.

The artworks all connect to the history of the area, and according to Maurice, this connection gives them meaning and makes them art, not just a pattern. We visited some of the stopping areas where Maurice explained the local connections to us.

The pavement at Rākautara showed the legend of Māui fishing up the giant fish which became the North Island, while his canoe which became the South Island. The Kaikōura Peninsula was Māui’s seat in the canoe.

At Te Ana Pōuri, a large compass etched into the pavement pointed to significant places such as other tribal areas or wind directions. This was the start of a track used by Māori in the old days to travel to other parts of the South Island.

A series of steps at Paparoa Point shows the genealogy of Tuteurutira, a tribal ancestor, who is represented in the pou at the top of the steps. Maurice told us the story of each of the ancestors named on the steps.

While we were lucky to have Maurice as our guide, each stop has an interpretive panel with information about the significance of the art. There are expansive views north and south along the coast, and on the rocks below, you will probably see seals sunning themselves. Breathing in the sea air is invigorating, making the stopping areas ideal for a break from driving, with some of them having restrooms and kiosks selling coffee and food.

Kaikōura is a farming area, and we visited several farms during our stay, getting an inside look at rural life. Our very first farm visit was at Highfield, where the landmark heritage woolshed is visible from the inland Kaikōura road. It’s one of the largest woolsheds on the South Island and underwent significant restoration after being damaged in the 2015 Kaikōura earthquake.

The tour had scheduled a visit where Michael Northcote welcomed us to his family farm. He told us that in the early days, all the farms in the area used the shed for shearing, with 60,000 sheep a year shorn there and over 20 shearers working at once. It’s been a community meeting place for over 100 years used for agricultural shows and dances. A few stray dance shoes were found under the floor during the shed’s recent restoration.

Today, only 6,000 sheep a year go through the shed, but it’s still used by the local community for Christmas carols. The holding pens and shearing stalls remain in place and the earthy aroma of thousands of sheep lingers in this grand reminder of early farming days.

On another day, we visited David and Sally Handyside at Medina where, as well as farming sheep and cattle, they have hosted walkers for 26 years. The Kaikōura Coast Track goes across their farm and a neighboring farm, with accommodation provided at farm huts. We walked down to a private beach where the first day’s walk along the track ends. There were amazing views of the rugged cliffs along the coast, but the ocean wind felt strong as we walked along the beach so we were happy to shelter in a nearby hut for a morning tea with home-baked muffins and cookies. In keeping with the Handysides’ passion for the environment they live in, the hut was built over the years from recycled materials.

The Handysides have protected giant native trees on their farm with a QEII covenanted conservation area. After morning tea, we headed up to a grassy cliff top with a spectacular view up and down the coast to start our walk. Leaving the sunshine behind, we entered the shade of the conservation area where kahikatea, mataī, and tōtara trees towered above us, forming a dense canopy overhead. The trunks of the largest trees were so thick that it took six people to encircle them, fingertips touching. Thanks to the Handysides’ love of the land, this forest area will be preserved in perpetuity.

After a morning exploring the natural heritage of this coastal farm, we ate lunch in The Whare, a vintage farm hut. It once housed farm workers, but with changing times, it’s now used to accommodate walkers.

Pro Tip: Kaikōura is renowned for its seafood. Whether you want to dine in a restaurant or buy some takeout to eat on the beach, seafood is available everywhere. Popular choices are blue cod and chips or lobster, which New Zealanders call crayfish.

For more on New Zealand, explore these articles: 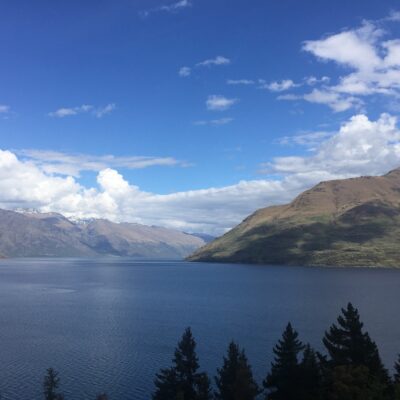 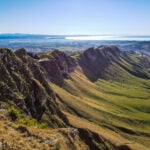 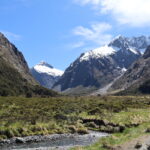 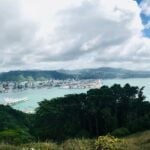