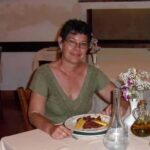 Two weeks after I retired at age 62, I was in Italy to soften the abrupt change from being employed to being retired. That’s where I learned the word attraversiamo, Italian for “Let’s cross over,” usually meaning the street. What a melodic — and misleading — word for crossing a Roman road. Those zebra stripes on the street declare that pedestrians have the right of way. Italians confidently step into six lanes of smart cars, taxis, Vespas, trucks, and gargantuan tour buses, expecting traffic to eddy around them. No one ever actually stops — particularly the pedestrians. Their part of the bargain is to walk at a steady, confident pace while drivers zoom around them.

I followed nuns and seminarians across frenetic Roman streets for a month. Then, one day I realized I was confidently crossing alone. After I reached the other side, I hummed “Pomp and Circumstance.” I had graduated into the class of those who cross Roman roads.

Crossing over from full-time employment to a pastiche of life in retirement took 3 years and was as fraught with hazards as the Roman roads. But I kept moving, made mistakes, and learned I needed to make some changes.

Often, I stood in the middle of my passage like a deer in headlights, splattered by my own insults: Who do you think you are? You’re too old. Why don’t you take up needlepoint? I avoided these annihilating thoughts by going to Italy with a purpose, researching a historical novel; going to India with a purpose, philanthropy; and going on a cruise with a purpose, taking my grandson on vacation.

I am not the retired type, so I knew I had to keep busy being productive when I was home. I signed up to be a substitute teacher in two nearby school districts. I took every press trip I was invited on and accepted every freelance writing job I was offered. I worked 70 hours a week before I retired, and I was a success. I was working just as hard after I retired but in a far more scattered fashion. Even though I was earning less and had even less of a work-life balance, I called that success.

This 3-year journey might have been easier if I had not thought of it as an easy right turn in my life, instead of a passage. All life passages are difficult. Safe passage requires a confident, unbroken stride, knowing dangers are looming but will flow around you given faith in yourself. Stop and you will be stuck in a disturbing place. I had not crossed that road; I was simply in the middle of a traffic jam I had created myself. I was too busy to figure out why, some days, I woke up wondering if this was the day I would reach the acceptance stage of being roadkill.

Obviously, things had to change.

To say “yes” to myself and my new vision of a successful retirement, I had to say “no” to some of the work that defined me. I did not want to go back to my window office with a plaque on the door and I did not want to continue the chaos I had made of my retirement. I hung a page of printer paper in my home office with a red magic marker sign that read “Carol.” Whenever I walked into my office, I knew my job was to be myself.

For substitute teaching, I realized that there were retired police officers on the roster who were better qualified than I was to handle unruly students. I made a “no-no” list of classes that the district should pay me $1,000 a day to teach, deliver a gourmet lunch, and send a limo. I found an informal underground of substitute teachers. We exchanged our no-no lists and updated one another when a class went from manageable to impossible, and when a bad class made a positive turn. By being selective, I remembered why I had earned a teaching certificate decades ago. Rather than crowd control, learning went on in my classes and I loved being a part of it.

I set aside some days and evenings for freelance clients. A folder for that line of work had a no-no list as well. In the communications business, one always has the client from hell and clients from another planet. As a freelancer, I had the option of politely answering their calls and saying “no” before they wasted my time outlining a job they would micromanage until I felt like mincemeat. By choosing clients who were reasonable to work with, I rediscovered the joy of delivering a complicated job on time.

After I retired, weeks — even months — went by and my office accumulated dust. I like to travel, so I travel frequently. But I travel on my terms now. Press trips are free trips, and I’m not one to turn down a freebie. A few press trips from hell inspired a no-no list for that activity as well. I am not going back to the place in India where they forgot to pick me up at the airport and housed me in a five-star hotel that gave two-thirds of the guests dysentery. I was not afflicted, but few listened when I warned: Don’t eat the lettuce. I am not going back to that Midwestern region that thinks fried food is the only food group. Nor will I return to that resort in the Dominican Republic where “just steps to the beach” was just steps to a jeep and then a 20-minute bumpy ride to a dirty beach. When invited on a press trip, I research the destination, hotel, tour company, and public relations firm before I say “yes.” I still have travel mishaps but not because I failed to do my homework.

When I decided to relocate from a Chicago suburb where I’d lived for more than 20 years to a place I knew little about, I hesitated for a moment on the cusp of that idea. Then, I remembered crossing Roman roads and stepping confidently into the chaos of relocation. That passage was easier. After all, I had survived the most difficult passage of my life when I stepped out of the window office into a life I had defined for myself. To find out how that turned out, you can read this article.

After two major post-retirement adjustments, if anyone said, “Let’s cross over,” I would say, “Ask me in a few years. I need some easy right turns for a while.” After crossing a major Roman road at rush hour, I need some downtime with a gelato or an adult beverage. Recovery from life’s crossings can take months, even years. Give it the time it needs. In my case, crossings led to lifestyles that suited me well, once I figured out how to live with them.

Don’t miss out on the rest of our retirement tips, including: