7 Unexpected And Unforgettable Attractions You Need To See In Rome

Rome is full of wonders and unforgettable sights. From the Colosseum to the Vatican and the Pantheon to the Spanish Steps, there is a new impression, a new memory to be made at every corner. But Rome also knows how to surprise its return visitors. Even if you have already seen the main sights, there are places that even Romans (sometimes) aren’t familiar with.

During my most recent stay, I have especially looked out for those little quirky and unexpected sights which add that little something extra to this city of history and culture — little things that made me smile, made me call my husband over to show him, and made me take pictures to show people who know Rome but had never known about these unusual and unforgettable sights.

Here are some of my favorite discoveries, in no particular order.

Funnily enough, I came across this pyramid when I was researching a particular point for my TravelAwaits article on what to do in Cairo After you have seen the pyramids. There was this picture of a pyramid, but it looked too perfect to be in Gizeh and had greenery around it. Investigating further, it turned out to be the Pyramid of Caius Cestius, a tomb in the only non-Catholic cemetery in Rome, open to all religions, but simply called the Protestant Cemetery.

Built around 18 to 12 B.C., this pyramid doesn’t quite have the age of the others but is more of a result of a Roman tourist heading to Egypt. Liking what he saw, Caius Cestius commissioned a pyramid, on a somewhat smaller scale, I hasten to add, for his own resting place. Strangely enough, the pyramid lasted very well, but next to nothing is known about Signor Caius Cestius himself.

Pro Tip: The pyramid stands across the road from the old city gate, Porta San Paolo, which was a southern entrance to Rome in the 3rd century, looking much older but in reality younger than the pyramid.

Inside Castel Sant’Angelo — originally Hadrian’s Mausoleum and later a fort and barracks, but now a museum — there is the Courtyard of the Cannonballs. Piles of cannonballs are neatly stacked into pyramid shapes, with inscriptions on the wall behind each pile giving data as to their size and number so that soldiers would not clog up their cannons with the wrong size ball.

Pro Tip: For the Castel, there are two queues: for those with tickets and those without. The one for “without” is amazingly quick and efficient, allowing you a bit of flexibility about when you might want to pop in.

It started on the flight to Rome. I was watching Joanna Lumley’s Rome travel program, and she mentioned the church of Sant’Agostino, where you could see a Caravaggio. It just so happened that one of the first places we stumbled upon when exploring the neighborhood was said church, just off Piazza Navona. The Caravaggio was magnificent, and we wanted more. And that is where Rome’s beautifully decorated churches came in handy. There are two other churches where you can see Caravaggios for free rather than having to buy tickets and stand in line for museums.

Altogether there are six Caravaggios you can see for free: one in Sant‘Agostino, three in San Luigi dei Francesi, and two further ones in the lovely Santa Maria del Popolo on Piazza del Popolo. I say they are free to see, but each is displayed in the dark to preserve the paint, and by putting either one or two euro coins in a box, the light comes on and you can view the magnificent paintings for a couple of minutes beautifully lit up. So, nearly free — unless you hang around for the next tourist putting their coin in.

Pro Tip: If you come to the churches on a Saturday, you might be lucky enough to visit during a wedding ceremony, as I did, or visit on a Sunday morning for a service. The stunning surroundings are even better when seen still in use rather than just as a museum.

In the National Roman Museum, the Palazzo Massimo alle Terme site, there are not only mind-blowingly stunning murals, frescoes, and mosaics from ancient Roman villas, but also statues. Statues of female heads made from marble and bronze, both full-sized and partial, highlight changes in hairstyles over the centuries. There are so many fantastic statues that you will be quite statued-out by the end of it.

But there is one that appealed to my infantile side, and it was that of a head on a rectangular block of marble with just the male genitals peeking out from the smooth marble. My husband and I discussed it and concluded that this was how statues might start if you are a sculptor: Get the sticking-out parts done first, then concentrate on the rest.

Pro Tip: Please don’t think that this is the most important exhibit in this fantastic museum, but it is one to make you giggle. You’ll find it just opposite the mosaic of the scared cat eating a bird on the ground floor.

Did you watch Roman Holiday, the 1953 film with Audrey Hepburn and Gregory Peck? Of course, you did. The Bocca della Verita, the “Mouth of Truth,” is a 2,200-year-old face with an open mouth, and legend has it that if you put your hand in and tell a lie, the hand would be bitten off, just as Gregory Peck pretended had happened to him.

The origin of the mouth is unclear, but it is thought that it might have been an ancient drain cover, like a gully. But it had been used as a lie detector in the Middle Ages when people accused of perjury or other lies were brought here to double-check. The mouth was found in the 1200s near a temple dedicated to Hercules but now sits in the front porch area of the church Santa Maria in Cosmedin, steps away from Circus Maximus.

Pro Tip: You are just a bridge away from Trastevere, with its lively markets, bars, restaurants, and the Isola Tiberina (see below).

I don’t know why it should be a surprise that a wide river such as the Tiber has an island, but for some reason, I was enchanted when I came across Isola Tiberina. Maybe it was because the sun was starting to set, which doused the island’s buildings in golden light. Nearly 300 feet long and just over 200 feet wide, the island is connected to both sides of the river by bridges. Once it was the seat of a temple to Asclepius, the Greek — not Roman — god of medicine and healing, and was built around 300 B.C. during a plague outbreak in Rome. Later, the Church of San Bartolomeo Apostolo was built on the ruins of the temple, and the healing theme continued with the construction of a hospital on the island in the 1500s, which is still open today. You will see some rapids, and this is where some mills stood, making good use of the river’s power.

Pro Tip: Visit around sunset time — when there are street musicians and the light is truly spectacular, enhancing the ancient buildings to perfection — and have an aperitivo or a plate of pasta at Tiberino on the island.

Just a few minutes’ walk uphill (steep, but steady and easy) from the Pyramid of Caius Cestius, you’ll find the Priory of the Knights of Malta. Within the grounds of which lies the Embassy of Malta, with views that must be absolutely breathtaking if only it wasn’t surrounded by a high wall and an enormous, locked gate. But the wonderful bit is found in that grand gate: the Aventine Keyhole, the Keyhole of the Knights of Malta. With the location chosen for its views — then not to be enjoyed over an aperitivo, but rather useful for defense purposes — it goes without saying that there are some sights to be seen.

There is usually an orderly, but fast-moving queue formed in front of it, but when you get to the keyhole and hold your eye to it, not only do you see a perfect gravel path with tall green hedges on either side, but at the end, framed by the arch formed by the hedges, is the St. Peter’s dome, perfectly framed. Tiny, yes; very difficult to photograph, yes, but there nevertheless, and offering one of those moments where you marvel at the beauty of Rome.

Pro Tip: You can enter the gardens, although only by appointment. I wonder if this would take some of the magic away from just peeping through the keyhole. Let me know if you ever go in. 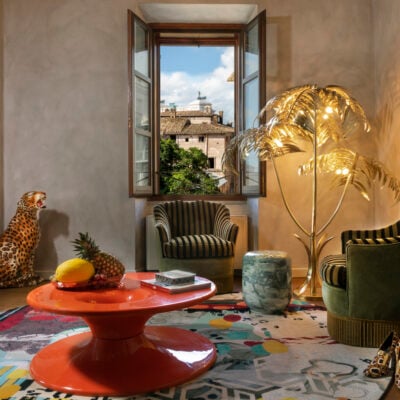 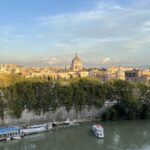 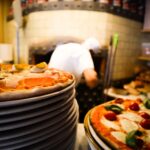 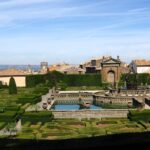