5 Fantastic Stops On A Missouri Road Trip From St. Louis To St. Joseph

Missouri is a fascinating state. It’s filled with history, nature, and incredible sights, and then there’s the food and wine that’s uniquely Missouri. That’s why I joined three friends on a road trip across the state. The trip was mostly comped, but all opinions are my own.

Our first stop was Grant’s Farm. It’s on land originally part of the family plantation of Ulysses S. Grant’s wife, Julia Dent. Today, it’s owned and operated by the Busch family. We boarded a train that took us through the multitude of wildlife and domestic animals living on the farm. We passed a small log cabin. Our driver told us Grant had built it himself and that he and Julia lived there a short time.

There’s so much there, including the Clydesdale Horses in their lavish barn, the Busch family’s home, a carousel, dining, and free beer samples.

We went across the road to White Haven, once Julia Dent’s home and where the Grants lived for 4 years. It’s now Ulysses S. Grant National Historic Site. The museum is a self-guided tour, but Ranger Rob gave us a guided tour back to the home and then turned us loose to explore the home and outbuildings.

Next stop was a trip to the St. Louis Zoo, home to over 14,000 animals. The zoo is huge, and I didn’t have time to see it all, but what I saw was wonderful. The habitats are spacious, and the animals look well cared for. It’s one of the few free zoos in the country and is the most-visited attraction in the region.

The Missouri History Museum is just a few blocks from the zoo and covers not only St. Louis’s story but all of Missouri with an emphasis on the music, one of my favorite topics.

Two other spots where we found music history were the Scott Joplin Museum and the National Blues Museum. Our guide took us through the home where Scott Joplin boarded and wrote many of his ragtime hits. She even “played” one of his rags on the player piano.

The National Blues Museum tells the story of the famous Blues musicians and how the Blues influenced other genres like rock and roll and bands like the Beatles.

The Griot Museum of Black History told us more about musicians like Jazz great, Miles Davis. It also covered Black history from the days of the Middle Passage to more modern greats like Josephine Baker and Dr. Martin Luther King.

No visit to St. Louis is complete without a trip to Gateway Arch, America’s tallest monument. I walked the 93 steps needed to reach the top. What a view! On one side I saw Illinois on the banks of the Missouri River and on the other side I had a perfect view of the Old Courthouse with its statue of Dred and Harriet Scott.

Downstairs there is the Museum of Westward Expansion telling the story of President Jefferson’s belief in “manifest destiny.” Lewis and Clark are featured and so much more.

My favorite dining spot in St. Louis is Blueberry Hill. It’s across the street from the Chuck Berry statue. The burgers are tasty, and the memorabilia is better than in some museums. They’ve been in business for 50 years and hosted Chuck Berry, the first musician to play in their 340-capacity Duck Room. He played 209 consecutive monthly concerts there.

Pro Tip: Westin Hotel is near downtown and comfortable. It’s across from the Baseball Stadium.

Just outside Hannibal, we stopped to see the Historic Village of Ilasco, what remains of a cement company ghost town from the early 1900s. The concrete jail built in 1909, church, and monument with flags of the ethnic groups that comprised the town, are worth a photo stop.

Hannibal’s all about Mark Twain. The museum and his boyhood home are a complex that tells his story. After we toured his home, we stepped into town as it looked when Sam Clemens was a boy with Becky Thatcher Museum, Huckleberry Finn House, Grant’s Drug Store, Twain’s father’s Justice of the Peace Office, and more.

Mark Twain’s steamboat captain career is where he got his pen name. Take a trip on the Mark Twain Riverboat. We took the 1-hour sightseeing cruise, but there’s a dinner cruise option.

Another place you’ll meet Mark Twain almost face-to-face is at the Mark Twain Cave. Young Sam Clemens played in the cave, and he mentioned it in The Adventures of Tom Sawyer and other books. You can take an hour-long guided cave tour and see his signature on the rock wall. It has been there since he was a boy but was only discovered in 2019. The walk is easy, and the cave is well lit.

Jesse James also left his signature on the wall of the cave when he used it as a hideout after a botched robbery. It’s dated September 22, 1879. His hideout is marked, but you can’t descend to the place where his signature is due to danger.

Another must-see at the cave is “The Life and Times of Mark Twain.” Twain impersonator Jim Waddell does a one-man presentation with stories taken directly from Twain’s own writings.

The Haunted Hannibal Ghost Tour is a fun and historically accurate tour through Hannibal.

Hannibal History Museum is at the start of the ghost tour. My favorite there are the Tom Sawyer dioramas.

Daniel Quarles, the real-life model for Jim in Twain’s Adventures of Huckleberry Finn, has a small but detailed Jim’s Journey that tells the African American story in Missouri.

Molly Brown is remembered for having survived the sinking Titanic. Her story was told in the movie and play, The Unsinkable Molly Brown. She was active as a fighter for social causes like women’s rights. Her home tells the story of the real woman.

Mark Twain Dinette is a lunch choice where you enjoy some of Twain’s favorites. For more upscale dining, LaBinnah Bistro is unrivaled. The ambience is French, and the food is European mixed with Middle Eastern with a bit of Missouri barbecue tossed in.

Patee House Museum tells the history of Missouri from the 1860s to the 1880s. There’s the Pony Express Headquarters’ original office and a recreation of St. Joe as it was in the late 1800s. One room has accurate portraits of the people who figured in Missouri history.

The house where Bob Ford murdered Jesse James on April 3, 1882, is part of the Patee House.

Our docent led us through the Pony Express Museum. It tells of the riders and their lives. One exhibit shows Johnny Fry, the first Pony Express rider, preparing to leave St. Joe. Spectators cheered him on. I entered a recreated rest stop cabin where the young riders might stay overnight or change horses and pumped water from a well.

Walter Cronkite was a St. Joe resident. He is honored with a free memorial at Missouri Western State University in Spratt Hall. The memorial covers his whole career, including videos of many historic broadcasts, including the President Kennedy assassination and the Watergate broadcast.

If you’re a fan of horror movies, you’ll be right at home at the Glore Psychiatric Museum. I had to keep reminding myself this was not a Stephen King movie set. This was the way mentally ill patients were treated until recent years. When they wanted to render a patient unconscious, they tied them to a chair and hit them in the head with a mallet. Lobotomies progressed from entering through the scalp to entering through the patient’s eye and scraping out brain matter. It was a fascinating museum but may cause nightmares later.

The James Farm, where Jesse James was born, is about an hour out of St. Joe. You are not allowed inside the house but can view the home through the screen doors. The museum where you enter has a documentary video about Jesse and his family.

For restaurants in the area, try J. C. Wyatt House, with décor that rivals its fantastic food; Fredrick Inn, once a historic inn; RC’s Lunch Car, where everything is made from scratch; or Boudreaux, a touch of New Orleans.

Stoney Creek Lodge is just off the interstate and offers an excellent complimentary breakfast. They have all the usual amenities plus an outdoor pool, an indoor pool, a spa tub, and Bearly Bar for late-night refreshment. I loved the rustic décor.

We headed to Sedalia, where one of our group lives. We drove through the historic district and saw Scott Joplin’s mural. The Historic Hotel Bothwell rated a drive-by. Built in 1927, its famous guests included Harry S. Truman, Bette Davis, Clint Eastwood, and Eric Fleming when the TV series Rawhide was filmed in Sedalia.

The next stop was Katy Depot Museum, built in 1896. It’s Sedalia’s official welcome center. They filled the old depot museum with history about Sedalia’s famous residents, including Scott Joplin, who was born and wrote his early songs there. I loved the railroad sculpture and the old caboose out back.

We had some time to visit Jefferson City, home to the Missouri State Fair. We visited The Missouri State Penitentiary. Even though we did the daylight tour rather than the paranormal, it was the spookiest place I have ever seen. It opened in 1836 and was the oldest continually operating prison west of the Mississippi until it was decommissioned in 2004. Time magazine called it “The bloodiest 47 acres in America.” Some of its most famous prisoners were Sonny Liston (who went straight after release), Pretty Boy Floyd, and James Earl Ray, who committed more gruesome murders after.

Pro Tip: After seeing the prison, Prison Brews is the perfect dining choice. It’s a brewpub with lots of choices. The pizza is fantastic.

For more on Missouri, check out these articles: 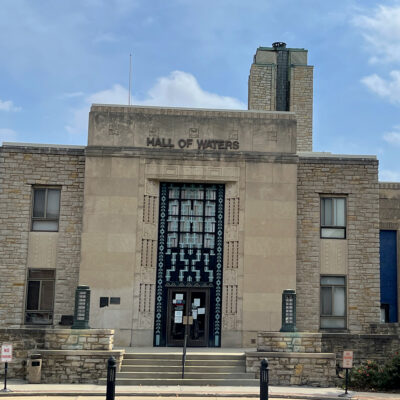 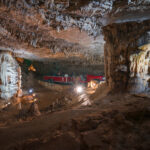 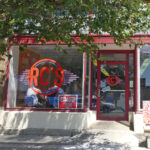