5 Midwest Cities I Love Visiting In The Summer 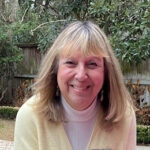 Mira Temkin
What Are Your 2023 Travel Plans?

America’s Midwest is known for its down-to-earth, friendly people and homespun sensibilities. The Midwest is also filled with bustling cities, historic sites, and a cultural wonderland that will create wonderful vacation experiences for you.

Here are five of my favorite Midwest cities to explore with some must-do activities, attractions, and festivals to put on your radar this summer, plus the best cuisine. I have been hosted by these cities, but my opinions are my own.

Located in the heart of the Midwest, Indianapolis is known for its many family-friendly venues. Bring your grandkids to The Children’s Museum of Indianapolis, considered the largest children’s museum in the world. This five-story building features a variety of innovative, hands-on activities in science, history, pop culture, and more.

The Riley Children’s Health Sports Legends Experience offers 12 outdoor activities in a seven-acre field with baseball, football, basketball, soccer, tennis, and more. Inside, there are now five immersive areas to explore in their popular Dinosphere® gallery of prehistoric creatures. Share the “Power of Children” exhibit featuring Malala Yousafzai, Anne Frank, Ruby Bridges, and Ryan White to learn how one person can make a difference.

Another good bet is White River State Park, America’s only cultural urban state park. Bike, Segway, or explore 250 acres of green space in this oasis in the middle of the city. You’ll also find the NCAA National Headquarters in the park, where you can discover The Hall of Champions and what it takes to be a student-athlete in 24 collegiate sports. Try your hand at interactive sports as you take on a downhill skiing simulator, sport-specific trivia, or shoot hoops in a 1930s-style gymnasium.

Be sure to include a stop at the iconic Indianapolis Motor Speedway, which welcomes over 300,000 visitors each May for the big race. Throughout the summer, there are other thrilling races to watch. Take their most popular tour, which includes a lap around the track and a chance to “Kiss the Bricks” from the 1909 surface. Or take a 90-minute full grounds tour around the 2-mile oval track. Stop at the Speedway Museum, highlighting memorabilia, trophies, and winning cars from 100 years of open-wheel racing.

Check out the Indiana State Fair from July 29 to August 21, which includes rides and games, barnyard animals, goat yoga, fabulous fair food, and the Indiana Beer, Wine, and Spirits Expo, featuring Kansas on July 29. Find a treasure at Raiders of the Lost Antiques – A Near Eastside Antique Crawl to sample local beer, coffee, cider, and snacks while visiting the antique and thrift stores on July 30. Plus, see special showings of Raiders of the Lost Ark at Kan Kan Cinema.

I found the best things to eat in Indy are the Hoosier pork tenderloin sandwiches, fried pickles, and country-fried steak (really chicken) with homemade gravy.

Smack dab in the middle of the state is the capital city of Columbus, Ohio. Sometimes called “Cap City,” Columbus is filled with charming neighborhoods, cool shops, and fascinating museums, plus the country’s largest college campus, Ohio State. Wander around the campus and check out where the Buckeyes play football and basketball.

That beautiful structure you see in the Columbus skyline is the National Veterans Memorial and Museum. A vision of John Glenn, this interactive museum tells the human stories of our military men and women before and after their service. Motts Military Museum in nearby Groveport highlights a treasure trove of artifacts from the Revolutionary War through Desert Storm. Warren Mott even has an F.D.N.Y. Ladder 18, crushed during the collapse of the World Trade Center Towers on 9/11.

I love the movie The Shawshank Redemption and was thrilled to tour the Ohio State Reformatory where scenes from the movie were filmed in nearby Mansfield. Take their guided or self-guided tour and get the inside scoop on the movie. There’s also a self-guided driving tour, the Shawshank Trail, to take you to other filming sites.

Mark your calendars for the Columbus Food Truck Festival, August 19 through 21 at the Franklin County Fairgrounds in Hillard. Look for 50 food trucks from across Ohio and the Midwest, plus music and other activities. Check out Columbus’s Wonder Bus Music & Arts Festival, August 26 through 28 featuring music, arts, and food.

Yep, Columbus is the headquarters for Wendy’s and White Castle, but you must try Salty Caramel Ice Cream by Jeni’s Splendid Ice Creams. Also recommended are the cream puffs and The Thurmanator, a hamburger like you’ve never seen the likes of before. Thumbs up for the Buckeye Donuts!

3. Chill Out In The Windy City — Chicago, Illinois

“So much to see, not enough time” will be your motto when you visit Chicago. “The City of Big Shoulders” is known for its tremendous foodie scene, first-class entertainment, and plenty of outdoor activities along the lakefront. Here are my recommendations for what to see and do in the Windy City. Chicago is still a meat and potatoes kind of town, so you’ll find great steaks everywhere. But don’t miss Chicago-style deep-dish pizza, Italian beef, and an all-American hot dog (just don’t put ketchup on it).

The Chicago River Architecture Cruise is a must. Not only do you get to enjoy a cruise on Lake Michigan, but you get a narrated tour by a Chicago Architectural Center expert and learn about the city’s famous architecture. You’ll see the spectacular skyline in a whole new light.

The Willis Tower Skydeck is one of the city’s top attractions. Head to the Ledge at Willis Tower where, if you dare, you can stand on an acrylic piece of glass over 100 stories high. Start with the interactive museum first to learn more about Chicago’s history and then ride an actual “L” train car through Chicago’s most popular neighborhoods before you take the elevator to the top. The views are exquisite.

Every weekend, people come out to celebrate… summer! Enjoy great food, awesome music, and lots of local vendors. Grab your fill of finger-licking barbecue and country music at the Windy City Smokeout from August 4 through 7. With headliners like Willy Nelson, Miranda Lambert, and Tim McGraw, there’s no better place to chow down on the world’s best barbecue.

Pro Tip: Check out the All You Can Eat Barbecue Brunch on Sunday.

The Chicago Air and Water Show is one of the city’s most popular events and it’s free. Look to the skies on August 20 through 21 between 10 a.m. to 2 p.m. each day at North Ave. Beach. If you’re in Chicago the day before, you can’t miss seeing and hearing them practice their maneuvers.

Pro Tip: Although North Avenue Beach is the focal point, the show can be viewed anywhere along the lakefront from Fullerton to Oak Street.

4. Explore The Gateway To The West —St. Louis, Missouri

You’ll want to meet St. Louis for a city that’s filled with wonderful gastronomy, history, and fun. The icon of St. Louis is the world-famous Gateway Arch known for its extensive views. Take the 630-foot ride to the top and you can see for miles. But there’s still much more to experience. Learn more about the region’s history as the USA expanded west. Or check out Gateway Arch National Park as you hop aboard an authentic 19th-century riverboat for a cruise down the mighty Mississippi.

The St. Louis Union Station used to be one of the largest rail terminals in the world. Renovated and repurposed, Union Station has become the city’s prime entertainment district with an aquarium, carousel, mini-golf, mirror maze, and even a ropes course. Plus, you won’t go hungry, with several restaurants and bars to take it all in. Take a spin on the St. Louis Wheel. Don’t miss the Grand Hall Light Show, which airs daily from five to 10 p.m. Stay at the St. Louis Union Station Hotel to be in the center of all the action.

Another exciting entertainment spot is Ballpark Village, right across from Busch Stadium, where you can dine divinely at places like the Budweiser Brew House or Cardinals Nation. They’ve also got a full calendar of events like the Taste of St. Louis, September 23 through 25.

Other summer festivals include Blues at the Arch, August 12 through 14 at Gateway Arch Park. This free music festival pays homage to the city’s famous blues history with lots of music, food trucks, and more. Imagine spending the day going around the world at an international multi-cultural celebration. At the Festival of Nations August 27 through 28, visitors can enjoy music and dance performances, ethnic craft demonstrations, and 50 ethnic food booths. Yes, this festival is even free.

Hankering for some classic St. Louis food? Try a St. Louis Slinger, a hamburger topped with hash browns and eggs, then covered with chili and cheese. Try toasted ravioli, filled and deep-fried. Or gooey-butter cake, so sweet and rich.

5. Get Your Motor Running In Detroit, Michigan

The largest city in Michigan, Detroit is a metropolis that keeps growing and changing. My favorite thing about Detroit is the urban beaches. Yes, you can actually sit on a colorful beach chair with an umbrella in the sand at Campus Martius Park while you enjoy the fountains and monuments. Check out the food trucks or nearby restaurants. Plan to visit the Detroit Institute of Arts, where you can see the larger-than-life Detroit Industry Mural by Diego Rivera that details what it was like to work at the Ford Motor Company. You can spend hours looking at all of the images, symbolic of the company’s history.

Bring back plenty of memories from the 60s when you visit the Motown Museum, home of Hitsville, U.S.A. This is where Diana Ross, Marvin Gaye, Stevie Wonder, and Smokey Robinson recorded their albums. The museum is currently being renovated but planning to reopen in August.

Take a drive out to Greenfield Village, where you can discover what life was like back in the day. This open-air museum features seven historic districts to enjoy 300 years of Americana. Ride on a Model T or horse-drawn carriage, hear the barbershop quartet, and let the costumed interpreters tell you their stories. My favorite place was the print shop where kids watched in amazement as a guide dropped letters into a silk screen tray and showed them how a poster was made.

My favorite treats were Coney Island hot dogs, Detroit-style pizza (squared edges with brick cheese), and a Boston Cooler made with ginger ale and ice cream — so refreshing on a sweltering summer day. 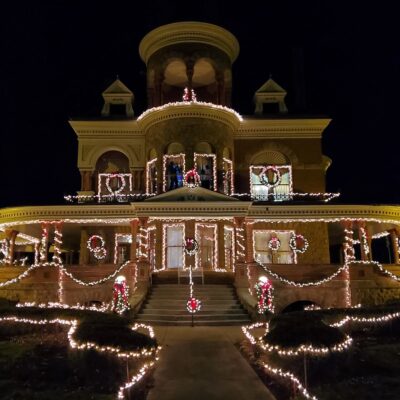 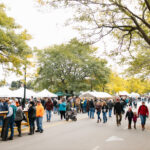 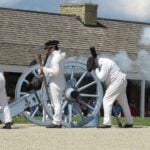