My 9 Favorite Beaches To Experience In Turks And Caicos

Chelle Koster Walton
What Are Your 2023 Travel Plans?

Back when I started covering the islands as contributing editor for the now-defunct Caribbean Travel & Life magazine, Turks & Caicos Islands was typically lumped with the Bahama Islands, more like a sidebar or afterthought than a destination of its own. In the meantime, during the last couple of decades, TCI, as locals shorthand it, quietly kept its natural beauty and treasures something of an inside secret only the intrepid discovered. It developed slowly and thoughtfully to become the exclusive destination it is today.

The dash-dot-dash nation of more than 40 isles and cays technically does belong, in a geological sense, to the same archipelago as the Bahamas to the north. It shares its mesmerizing waters — arguably the most beautiful in the Caribbean — along with its low-lying profile and simply stunning beaches.

The main resort island of Providenciales, it too shortened to a manageable “Provo,” developed first with a Club Med Turkoise and a handful of others that followed on TCI’s most awarded beach, Grace Bay. Its acclaim has swelled across the region and world, in fact. The Tripadvisor 2022 Travelers’ Choice Awards proclaimed it the “Number 1 Best Beach in the World.”

So, let’s start there and move our way onto lesser-known gems in the magical island world of Turks & Caicos.

Note: My visits to Turks & Caicos have been hosted by resort properties, but all opinions expressed are entirely my own.

Provo holds the main international airport for TCI, which lies about 20 minutes by taxi or rental car from the heart of the Grace Bay resort area. The litany of high-end properties includes Wymara Resort and Villas, The Palms, The Somerset on Grace Bay, Grace Bay Club, the new Ritz-Carlton, and on and on. Yet the 3-mile stretch of perfect white sands rarely feels overcrowded.

A barrier reef known as Princess Alexandra Land & Sea National Park fronts the beach, meaning superlative snorkeling, gently lapping water in that shade of blue and green that doesn’t even have a name, and protection from storms and sharks. Snorkeling hotspots along the stretch include Coral Gardens, Smith’s Reef, and Bight Reef. Most resorts and a number of shops can set you up with snorkeling, diving, and all manner of water sports equipment. The north-facing beach is also conveniently close to a number of fine shops and restaurants.

Directly south of Grace Bay on the island’s opposite shore, Long Bay Hills is considerably lower key in most ways, with fewer resorts and more homes. The wind, however, makes it wilder, and a magnet for kite-surfers. My one encounter at Long Bay, at the east end of the Caicos Banks, involved a different sport, however, namely horseback riding.

Provo Ponies has its headquarters nearby, where it stables a collection of rescued horses, descendants of colonial animals left by the British and adapted to the climate and geography. I have done my share of horseback riding in the islands, but Provo Ponies hands-down was the most humane and professional operation. Sure, my little horse had a stubborn streak and a seemingly endless appetite, but once we touched water, he (and I) chilled with the lull of the gem-hued waters and sea breeze. The natural beach was basically deserted but for our posse of eight, while the sky and sea seemed to compete for the most pleasing palette.

Commonly called Iguana Cay, it is home to (along with, to a lesser degree, other nearby beaches) the rare species Cyclura carinata carinata — an endangered iguana found only in the Turks & Caicos. Little Water Cay lies offshore from Provo’s easternmost Leeward end and requires about an hour kayak paddle through Leeward Going Through passage to get there. Kayak and paddleboard rentals and tours are available in the Blue Haven Marina complex.

Boating excursions will also take you to this tyrannosaur-ish preserve where iguanas warily scurry along the beach and among the rock upcroppings, sometimes engaging in fierce territorial battles, but otherwise harmless. Boardwalks and trails traverse the island and signage and exhibits educate about the rock iguana and other aspects of local natural history.

Pro Tip: If your toenails are painted red or pink, you may want to consider wearing water shoes. The iguanas sometimes are known to mistake them for berries.

I like to refer to this one — as I’m sure many others do — as Da Conch Shack Beach. One of the most famous restaurants in TCI, Da Conch Shack is the quintessential Caribbean toes-in-the-sand spot to while away the hours staring aimlessly at pure seaside beauty, basket of fresh-chopped conch salad in hand, rum something at the ready. Grab a picnic table under the palms, and you have the makings of what the rest of the world is dreaming about right now.

The iconic restaurant lives in a historic residential community of churches, brightly painted sloops, and tidy homes near downtown and the airport and west of Grace Bay Beach. Da Conch Shack has its own small retail operation, selling all things conch and locally made crafts.

The bad news is its distance from most civilization on Provo. It’s quite a haul there and back, but you can opt to stay (if your vacation budget allows) at the chic Amanyara resort, which overlooks one of the park’s isolated beaches. A reef and rocks make great snorkeling opportunities, but often the seas are too rough. Head west of the point if that’s the case, where the water calms down.

A 30-minute ferry ride from Provo, North Caicos holds farms and the ruins of the Wades Green Plantation. A short taxi or rental car ride from the ferry landing, Whitby Beach gets kudos for its isolation and clean water and landscape. Although Whitby holds most of the island’s accommodations, its 3.5-mile length gives beachgoers plenty of space to walk and spread out.

Several access points, including one at Silver Palm Restaurant (open on “island time,” aka sporadically), make it easy to get to the sands. Midway down the beach, Pelican Point awards snorkelers with underwater rock formations to explore.

A causeway connects North Caicos to Middle Caicos, where you will find old island culture intact — from traditional foods to handmade crafts. A world away from the touted resort beaches of Provo, Mudjin Harbour Beach is surely unparalleled in its bluffy beauty. I’m a big fan, if you can’t tell. With private cove beaches you can swim to, this Middle Caicos beach is located near Dragon Key Resort, a destination for humpback whale watchers in winter.

A short, slightly steep concrete path leads from a bar and grill (open seasonally) at the top of a limestone cliff, down to the 3-mile stretch of sand embraced by the rocky upcroppings. A shallow cave to one side provides shade and shelter from the elements, and see-through turquoise waters edge sugar sand. Because of the rocky protrusions, this beach is more about relaxing, walking, and wading than swimming. Rocky Dragon Key lies just offshore, so bring along your snorkel equipment. Don’t forget your camera, because the cliff-top views are drop-dead gorgeous.

Pro Tip: Charters and tours from Provo will take you on a day excursion to Middle and North Caicos. Highlights include Flamingo Pond Overlook and Conch Bar Caves.

The island of Grand Turk serves as the nation’s capital and cruise ship port. It lies about 70 miles from Provo and has no international flight service. Day excursions and domestic flights from Provo can get you there and back.

Governor’s Beach, part of Columbus Landfall National Park, is considered the island’s best beach, thanks to its calm, windowpane waters and pinkish-hued, fine sand. When cruise ships are in port, vendors typically set up to sell beverages and trinkets. It’s known more as a chilling beach than a place to snorkel, as rocks and structures are limited.

Pro Tip: If you are exploring the island by rental car, hit Governor’s Beach early before cruise-ship shore excursions arrive.

Those seeking island isolation far, far from the madding crowd head to tiny, off-the-radar Salt Cay, usually by domestic flight or day boating excursion from Provo or Grand Turk. In season, whale-lovers come to watch from tour boats and even swim with the majestic beasts.

For more on traveling in the Caribbean, explore these articles: 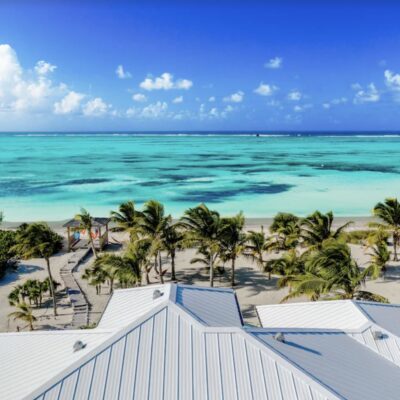 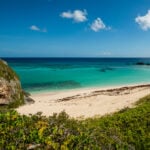 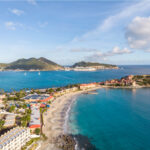 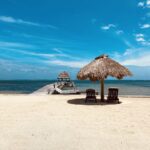