My 7 Favorite Stops On One Of The Most Beautiful Trails In The U.S.

One of the loveliest experiences in Indiana is the stained-glass trail across the northern portion of the state. The glass history in Indiana is due in part to the discovery of natural gas in the 1880s. The first significant commercial gas well came on September 15, 1886, in Eaton, Indiana.

This discovery covered a 5,000 square mile area. Enjoy traveling through the small agricultural towns and the bigger cities while exploring their glorious stained-glass treasures. Combined, they establish a wondrous treasure trail of the natural gas phenomenon, glass history, and stained-glass sites in northern Indiana and beyond.

Note: A few of the places listed I attended during hosted trips. However, all opinions are my own.

With 23 glass factories, Dunkirk was dubbed the “Glass Capital of Indiana.” Stop at the Dunkirk Glass Museum. Their website shares, “There are over 20,000 pieces of glassware from 110 factories around the world currently on exhibit in the Museum. We have glass that was made locally at Indiana Glass in Dunkirk and other area factories including 25 leaded lamps, 25 leaded windows and an exhibit of cup plates, which were primarily manufactured on the East Coast.”

The little museum is connected to the library. I have only seen the museum from the outside window but want to come back.

There is also a memorial to Benjamin E. Rubrect, the First Secretary of the Flint Glass Workers Union of North America. He was an active member from the inception of the union in July 1878 until his death in 1922.

Pro Tip: Stop and dine at the Glass Capital Grill. I tried the pork chops and loved them!

Portland is in Jay County. Construction of the Jay County Courthouse began in 1915 and was completed in 1919. Built of Bedford stone with lovely columns, the courthouse has marble walls and floors. There is an astounding stained-glass skylight in the dome. The courthouse sports brass door entrances and has four historic paintings making this a great stop on the stained-glass trail.

The Jay County Historical Society Museum in Portland provides artifacts and history of the gas boom. This museum is one of many sites listed on the Jay County Gas Boom Driving Tour.

Also, on the Gas Boom Driving Tour is the Ashbury Methodist Church, which offers beautiful stained-glass windows. Construction started during the gas boom in 1897, but because of funding, took years to complete. The windows are amazing!

The Elwood Haynes Mural, painted by Pamela Bliss, is located at Meridian and Arch streets. The mural shares information about Jay County’s most notable inventor. The gas boom brochure states, “Elwood Haynes invented the first horseless carriage and many tools that were important to Jay County’s natural gas boom. Elwood was born in Portland in 1857, and moved his family to Kokomo after the gas boom emerged.”

Stop at the Jay County Fairgrounds to see Floral Hall. Listed on the National Register of Historic Places, built in 1883, and completed in 1891, Floral Hall is a 2.5-story, octagonal frame building that is also on the gas boom trail!

When natural gas was discovered in Kokomo, it started an industrial revolution in the town. Today, there are many wonderful stops as a result. The Indiana Natural Gas Company leased 23,000 acres of land. Assuming gas production would last a couple of hundred years, they invited businesses to come to Kokomo offering free gas. One business lured to town was the Kokomo Opalescent Gas Co.

Charles Edward Henry was born in Paris in 1846 and eventually came to the U.S., beginning his career as an expert glass chemist in New York. When he learned of the gas boom he came to Kokomo. Production started at the Kokomo Opalescent Gas Co. on November 13, 1888. Today, it is the oldest glass factory in the U.S. and the only one that still hand mixes its 22,000 colors. Book a tour and enjoy their amazing gift shop.

The Howard County Museum and Seiberling Mansion are all one magnificent place! The gas boom brought Monroe Seiberling to Kokomo. Founder of the Diamond Plate Glass Company, which was the largest plate glass factory in the country at one time, Seiberling also started Kokomo Strawboard and other factories.

Seiberling began building this Queen Anne and Romanesque architectural masterpiece in 1889, completing it in the fall of 1891. The woodwork in the natural-gas heated home includes oak, walnut, maple, cherry, mahogany, and tulip poplar.

The George Kingston family lived here the longest. Kingston, an agricultural and automotive giant, invented the carburetor used in Ford’s Model T. Kingston Products made roller-skates and an array of other items. After the Kingstons moved out, the mansion became Indiana University Kokomo until 1965.

In 1972, the building, the Elliott House (which they use for events), and the two carriage houses were given to the Howard County Historical Society. Through renovations, this home and its contents tell the story of the gas boom and Howard County history.

One of the buildings of the former Diamond Plate Glass factory is now an antique mall, the Original Treasure Mart. The building is a treasure trove that has been preserved and is filled with antiques.

Metallurgist, inventor, and automotive designer Elwood Haynes was born in Portland and moved to Kokomo. He became the manager of the Natural Gas Company when he invented the thermostat and a refrigeration device. Traveling by horse, he grew weary from the long distances and drew up blueprints for the horseless carriage. On July 4, 1894, he took his first ride in the gasoline-powered horseless carriage.

Thus Haynes invented the first commercially successful gasoline-powered automobile in the United States in 1894. The Elwood Haynes Museum offers both a house tour and insight into his inventions. During a visit, you can also see one of his cars on display.

Pro Tip: Dine at the Half Moon Brewery and enjoy great shrimp and creamed corn. The Irish Pub, Cook McDoogals on the historic downtown offers great fish and chips and a beautiful stained-glass window.

Carrie Steinweg of Chicago Foodie Sisters and I were hosted at The Sanctuary Overnight Event Hub. This amazing place is a 1903 Gothic Style church turned Overnight Event Hub. Located just blocks from historic downtown Wabash, Indiana, it takes your breath away. The lovely wooden doors, furnishings, and state-of-the-art kitchen just add to the charm.

The historic Eagles Theater is a wonderful treasure. Although there is no stained glass, this venue, originally constructed in 1906, is now a five-story building housing a nostalgic theater for movies and live entertainment.

​Pro Tip: If running when you are in town, take a Visit Wabash County Trolley Tour!

Fort Wayne is outside of the gas boom area; however, they have amazing buildings and glass sites. The Allen County Courthouse, a National Historic Landmark, is known for its murals, sculptures, scagliola faux marbling, unique tile floor designs, and abundant stained glass. The central dome itself is a whopping 20 feet long and 200 pounds.

There is a reawakening of public arts and murals downtown. Follow the public art trail pass. My favorite art is an alley sculpture called “77 Steps” which includes more than 300 hanging tubes with colored lights that run the length of the alleyway.

Take in an event at the beautifully refurbished Embassy Theatre.

Pro Tip: Stay at The Bradley Hotel, conveniently located near the public art, the courthouse, and the Embassy Theatre.

The Reid Center (formerly Reid Memorial Presbyterian Church) has more Tiffany glass than anywhere I have ever seen. Every window in the former church is Tiffany! Today, Reid Center is a performing arts venue and community center. It is a national historic landmark.

The Wayne County Historical Museum has everything from cars to an Egyptian mummy. Julia Gaar established the museum. It is her family that established the Gaar Scott steam engines and threshing machines.

The Model T Museum is a must-see while in Richmond. My favorite item was the homemade 1922 snowmobile that delivered the mail 60 miles every day.

Pro Tip: Stay at eco-friendly Seldom Scene Meadow B&B, which is run on solar electric and passive solar hot water. I was hosted at this bed and breakfast with lovely views.

Pamela Bliss has a mural of President Lincoln’s funeral train that stopped in Cambridge City. High Hat Antique Mall was also a fun stop in this town full of antiques.

Cambridge City is along the National Road and is named after the town of Cambridge, England. Home to several antique stores, the town expanded due to the location of the  Whitewater canal.

Winding your way through northern Indiana, these are a few of the sights you can see along the gas boom trail and beyond.

For more on Indiana, check out these articles: 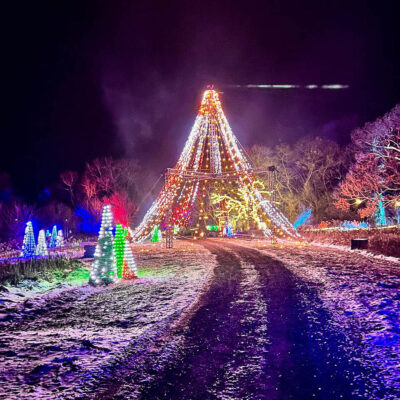 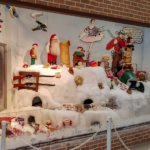 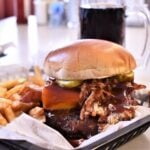