Portugal is a small European nation of about 10.5 million people. Next to Spain, with which it was combined, Portugal achieved independence in 1143. It extended its empire to include countries in India, Africa, East Asia, and South America and created the longest enduring European empire, lasting over 500 years. Deciding to end dominion over its colonies, Portugal returned them all, ending with Macau in 1999. Perhaps best known for its Age of Discovery explorers such as Ferdinand Magellan and Vasco De Gama, Portugal keeps many interesting secrets and lesser known wonders. We’ve made some fantastic discoveries about this beautiful country and want to share some surprising facts you probably didn’t know about Portugal.

1. Portugal Has The Westernmost Point In Europe

Cabo da Roca, a rocky point along the Atlantic coast, about 40 miles west of Lisbon, is the most westerly point of Continental Europe. The cliff stands some 500 feet above the sea and, in early days, housed a fort that guarded the entrance to the Lisbon harbor. Today there is still a lighthouse that provides help for navigators. The area is incredibly windy and taking a photo while standing at the continent’s edge is a favorite for locals and visitors alike.

2. The World’s Oldest Bookstore Is In Lisbon, Portugal

The Portuguese love books so it’s not surprising to see bookstores everywhere, in large metros and tiny towns alike. Books are found new and used and in many languages. One of our favorites shops is Déjà Lu, located inside the historic Citadel in Cascais. All of its profits are given to the Portuguese Down Syndrome Association. The city of Óbidos is a UNESCO Creative City of Literature. So it only makes sense that the oldest bookstore in the world is still in operation and located in Lisbon. Livraria Bertrand in Lisbon’s Chiado district opened in 1732. Its owners and name may have changed over the years, but its gorgeous interior and tiled façade continue to surprise and delight. Perhaps not coincidentally, Livraria Lello in Porto has been called the most beautiful bookstore in the world. Certainly, bibliophiles have much to enjoy in Portugal.

It’s clear that the Portuguese have always been crazy about books when you learn that two of the oldest libraries in Europe, each some 300 years old, are in Portugal. But what’s even crazier is that they employ bats — yes, real bats with wings and all — to protect the books inside of them. Joanina Library at the University of Coimbra contains original manuscripts from the 15th century. The Royal Library in the Palácio de Mafra is a masterwork itself, with important volumes as well as spectacular craftsmanship. The bat colonies emerge at night to eat the pests that would eat away at the books, thus helping retain important bits of history, even as they become part of it.

4. The Portuguese Brought Tea Time To The English

Another shock to the system might be the surprising fact that Portugal is actually responsible for bringing tea to Britain. In 1662 when Catherine of Bragança left her beloved homeland of Portugal to marry King Charles II, she brought to her royal court her habit of taking afternoon tea and drinking it daintily from porcelain tea cups. Previously, only medicinal teas were available and taken from clunky mugs. Those in court wishing to emulate Her Royal Highness took to the habit, and before long, so did most of Britain. Thus, the little Portuguese princess gave another gift of herself to her husband’s home.

5. The Biggest Waves Ever Surfed Are In Portugal

Surfers love to catch big waves, the bigger the better. And nowhere are they bigger than at the Silver Coast beaches of Nazaré, Portugal. The official record, set forth in Guinness World Records for the largest wave ever surfed, is an 80-foot whopper at Praia do Norte in Nazaré, mastered by Brazilian wave master Rodrigo Koxa in 2017. The largest wave record for a woman is held by Brazilian surfer Maya Gabeira, at 73.5 feet. While these waves are in the record books, there is a potential record-breaking wave ride of over 100 feet taken by Portuguese local António Laureano that is under analysis. It seems only a matter of time before someone hangs 10 on a 100 foot wave. And our bet is that it will be a wave in Portugal.

6. Portugal Is Home To 17 UNESCO World Heritage Sites, And Possibly Many More

One of the most surprising facts you probably didn’t know about Portugal is that it holds 17 designated UNESCO World Heritage Sites within its borders. The Monastery of the Hieronymites and Tower of Belém in Lisbon; the historic center of Évora with its ancient Roman ruins; the cultural landscape of Sintra, including five incredible palaces; the Alto Douro Wine Region; and the Garrison border town of Elvas, with its fortifications, are just a few of the important spots that made the list. But even more surprising is that there are at least 19 more sites Portugal has listed on its “tentative” list — places that may find their place among the other UNESCO sites in the future. The Águas Livres Aqueduct, Levadas of Madeira Island, and Vila Viçosa (where Catherine of Bragança was born) are just a few. It’s clear that any visitor to Portugal will have a wonderful range of options for exploring the country’s heritage.

7. Portuguese Cuisine Has Influenced The World

Many already know much about the exploration of the Portuguese and how they made many discoveries around the world. But what you may not know is that the Portuguese have influenced culinary habits around the world as well. We already mentioned bringing tea to Britain. But that is just one example. The Portuguese went to Goa, India, and prepared a pork dish full of garlic and wine, which these days has become vindaloo, one of the most popular Indian dishes. When Portuguese sailors unexpectedly ended up in Japan (rather than their anticipated destination of Macau), they soothed themselves with lightly battered green beans, paving the way for what is now mostly known as tempura, associated with Japanese food ever since. Anyone who has tasted the delicious and decadent Portuguese pastel de nata will wonder whether it was modeled after the egg tarts of China. In fact, it is the other way around. And lovers of hot and spicy piri-piri (sometimes spelled peri-peri) sauce may be surprised to learn that, in fact, the Portuguese cultivated the essential peppers from South America to Africa then India, Thailand, Malaysia, and elsewhere. Now you can even enjoy it at Nando’s, but don’t forget to thank Portugal.

8. Portuguese Wine Is Exceptional – And Affordable

While European powerhouses such as Italy, France, and Spain are well-known for their excellent wines, the Portuguese have been quietly consuming equally magnificent wines, many of which are just being recognized by other parts of the world. Porto and Madeira fortified wines have managed to make their excellence known over the years. And even the fresh and bright “green wine,” vinho verde, may make it to a summer table here and there. But Portugal has 12 designated wine growing regions, each with its own personality producing distinctive wines that we have grown to appreciate so much since we’ve been able to taste them. While you might not be so surprised to know that Portugal produces such high quality wines, you might be very surprised to learn that many delicious table wines from all of the regions can be purchased for under €10 (about $10.95) a bottle. Another surprise is the Carcavelos wine, a fortified wine produced in only one small area along the Lisbon coast, one of American Founding Father Thomas Jefferson’s favorite libations.

9. Portugal Is Not Only One Of The Best Places To Visit, But Also To Live Or Retire

It’s easy to say that there are surprising facts you didn’t know about Portugal. We continue to learn them every day. But one of the best things that we discovered is that Portugal is not only a phenomenal place to take a vacation, it’s also a wonderful place to call home. The ancient city of Braga, Portugal, was voted the best place to travel in Europe. Lisbon and Porto continue to get more visitors every year. But for us, visiting was not enough. We fell in love with this country. The history, culture, great food, and weather — so many reasons made us want more. We made the move to Portugal and have been grateful every day since. We’re learning to speak Portuguese, which is challenging but fun. We’re living in Estoril, a city close to the sea with lots of history. People ask us all the time what it’s like living in Portugal. We have made friends, found favorite bakeries and restaurants, and continue encountering new surprises. But most of all, we are happy to call Portugal our home. Perhaps the most surprising fact you probably didn’t know about Portugal is that it is one of the best places in the world to live and retire. If you’re thinking about making a visit to check it out, just let us know. We’ve become a sort of “welcome wagon” around here, which is probably the most surprising fact of all.

Though Portugal is not a large nation, it has had a meaningful impact on the world. We have discovered surprising facts about its history, culture, cuisine, and more. We hope we’ve stoked your curiosity to discover more surprising facts you probably didn’t know about Portugal.

If you want to learn even more about Portugal, go see the rest of our coverage:

Portugal10 Oceanfront Villas In Portugal That Cost Less Than A Hotel 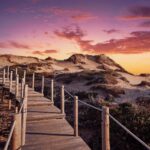