The Thing That Surprised Me Most Visiting Petrified Forest National Park

Before moving to Arizona, my husband and I vacationed here. On our first visit to the state, we stopped at Petrified Forest National Park. Driving through the desolate area, we marveled at the colors of the Painted Desert. Never have I seen such gorgeous pastel colors of the earth exposed. But as colorful as it was, the lack of vegetation and of life was also obvious.

The petrified logs were even more amazing. From a distance, they seemed like normal tree logs that were cut yesterday. I had to get close to understand that they were rocks — petrified tree logs. I marveled at their gorgeous colors on the broken sides, ranging from dark golden brown to purple, white, and everything in between. The petrified logs and smaller wood pieces were out of this world.

Though it wasn’t a “forest” with standing trees, I expected to see petrified logs in the park, given its name. Their colors surprised me, as did the colors of the Painted Desert. I’ve seen nothing like it before.

But what surprised me the most was that people once lived in this inhospitable environment. In this gorgeous, but bleak desert, it seemed impossible. However, as I learned when visiting the park, ancient people built and lived in homes in the area.

Petrified Forest was home to different groups of people for thousands of years. The earliest sites in the park are camps left by prehistoric hunters at the end of the Ice Age, as far back as 13,500 B.C. The area was more habitable, with more rain, cooler temperatures, green grasslands, and wooded river bottoms, so this is no surprise.

As the climate became warmer, people needed more diverse food sources, and they introduced domesticated flora and fauna, and by 500 B.C., they grew corn.

Later on, in what archaeologists call the Basketmaker II Period, ranging from 500 B.C. to A.D. 650, the climate became what we know it today. Instead of moving away, people stayed and built more permanent villages comprised of pit houses. They focused on farming and grew corn, squash, and eventually beans. The largest village from this period in the park is called Sivu’ovi and has about 47 pit houses and many storage pits. However, the site is remote and is not open for visitors.

Starting in A.D. 650, people built more complex structures and villages, even using petrified wood as a building material, and clusters of stone structures replaced the stand-alone pit houses. This was the start of the Pueblo Period, named after the structures housing whole villages. This is also the time we have most archaeological evidence from. The people who built these villages were the Ancestral Puebloans, ancestors of several modern-day tribes of Arizona, the Hopi and Zuni among them.

The remains of their homes and the petroglyphs they created are the archaeological sites we can visit in the park.

Ancestral Puebloans built and lived in the eight-room pueblo we call Agate House between 1050 and 1300. Here, in the desert, surrounded by petrified logs, they used petrified wood to build the structure near their agricultural fields. Archaeologists believe that this was most likely a one-family home occupied year-round. Once part of a larger community, Agate House now stands alone on top of a small hill in Rainbow Forest.

However, the house we see today is not the original. Excavated in the 1930s, it was also rebuilt. Though rebuilt using original materials, the reconstruction might not be totally accurate, though it is close enough to enable us to imagine the lives of the people who lived here.

Hundreds of similar petrified structures are scattered throughout the park, though this is the only reconstructed one. To see it, drive to the Rainbow Forest Museum, and from there you can take the 2-mile-long Agate House Trail.

Though not very long, the hike to Agate House takes you through desolate areas with no shade. At the junction of the trail with the Long Logs Trail, a shelter offers shade, but otherwise, the trail leads through the “badlands” with no shade. Make sure you wear sun protection and carry water.

The largest archaeological site in the park, the ruins of Puerco Pueblo, sheltered an entire village between about 1250 and 1380. Featuring over 100 rooms, archaeologists think the village was home to about 200 people during its largest occupancy.

The Ancestral Puebloans built this one-story high village around a rectangular plaza. Here they didn’t use petrified wood, but hand-shaped sandstone blocks to build the structures. They used the rooms as living quarters and storage, and several kivas for ceremonies. The buildings had no doors or windows, so they used ladders to enter through the roofs of the rooms, like all other pueblos built around the same time across the Southwest.

They built this pueblo in the 1200s near the Puerco River — hence the name — that offered a reliable source of water for crops. They farmed corn, beans, and squash along the river.

Besides better farming land, the river also offered interactions with other pueblos through travelers and traders who used the riverway as a travel corridor.

However, by the late 1300s, they abandoned Puerco Pueblo, moving on to other areas with better living conditions.

Puerco Pueblo is easy to visit. The parking lot is right on the main park road, and it features a visitor center and museum with exhibits with historic information and restrooms.

The 0.3-mile trail running through the archaeological site starts at the south end of the parking lot. Besides the ruins, you’ll see several well-defined petroglyphs along the trail.

Petroglyphs And A Solar Marker In Puerco Pueblo

Petroglyphs, images carved into a rock’s surface, are common throughout the Southwest. You’ll see several of them along the Puerco Pueblo trail. One of the most recognizable is a bird carrying (or eating) a frog, probably a common occurrence witnessed by the people of Puerco Pueblo along the river.

Another one is more important, though less spectacular. A small design with concentric circles, it is a solar marker. Common in the Southwest, these petroglyphs mark astronomical events, most often summer and winter solstices, and spring and fall equinoxes. In Puerco Pueblo, it marks the summer solstice.

For about 2 weeks around June 21st, you could watch a beam of light move down through the boulder, and pass through the center of the rings within a few minutes of 9 a.m. I haven’t seen the actual light show yet, only read about it, but the petroglyph is easy to see and recognize if you know what you are looking for.

Less than a mile from Puerco Pueblo, on the opposite side of the same road, you’ll find Newspaper Rock. Not quite a newspaper, and not the surface of one rock, the archaeological site comprises a group of rocks featuring a high concentration of petroglyphs (over 650 of them), scattered through the different rocks.

You can’t get close to them, but the park has a viewpoint set up with several spotting scopes available for a better look.

The name “newspaper” implies the rock surfaces might have acted as a news site, not only over space but also time, through several generations. The “writers” were Ancestral Puebloans living along the Puerco River between 650 and 2,000 years ago. Some lived in Puerco Pueblo, others farther away, in different settlements along the river.

Written by so many people from different places and over several generations, the petroglyphs don’t offer only one story. Modern Native people, the descendants of the Ancestral Puebloans, help archaeologists decipher them. According to them, some petroglyphs mark family and clan symbols, territory boundaries, migratory routes, and calendar events, others have spiritual meaning.

No matter their meaning, they still stand witness to the lives of people who once called the area now known as Petrified Forest home.

Since that first visit, I’ve seen many other Ancestral Puebloan sites and petroglyphs throughout the Southwest. Their existence in the bare and inhospitable desert doesn’t surprise me any longer. Still, the awe remains: they lived and thrived in such a desolate area of the world without modern amenities. I love the desert as they must have. But I still can’t imagine living here, especially in the summer, without air conditioning and running water.

Ranging from small scatters of broken stone to large villages housing over a hundred people, the park protects nearly a thousand known archaeological sites, though we can visit only a few. Understand that oils and acids from your hands can damage the petroglyphs, so it is important to follow the park rules and not touch any of them or climb on any of the sites.

However, the archaeological sites in the park are not the main reason for visiting Petrified Forest. It is the sight of the gorgeous colors of the Painted Desert, the petrified logs, the remains of a prehistoric rainforest once home to giant trees, ferns, and dinosaurs, and a large system of rivers that make the drive to this desolate area of Arizona worthwhile. When visiting Petrified Forest, you’ll learn geology, paleontology, archaeology, and even modern history, since a section of Historic Route 66 runs through the park.

You can spend a day in Petrified Forest National Park, but remember the park closes. So even if you just want to drive the Historic Route 66 through it, make sure you’ll pass through during opening hours.

You’ll find restrooms at both visitor centers, the Rainbow Forest Curio Shop, Painted Desert Inn, Chinde Point, and the Puerco Pueblo parking lot. However, you won’t find any other amenities, like restaurants, hotels, or even campgrounds. This means you need to make sure you carry plenty of water, especially when hiking in this dry high-desert environment. Having snacks in the car won’t hurt, either.

However, you’ll find several restaurant and hotel choices in Holbrook, about 20 miles from the park’s entrance. For more choices, the larger Winslow is only 55 miles away. 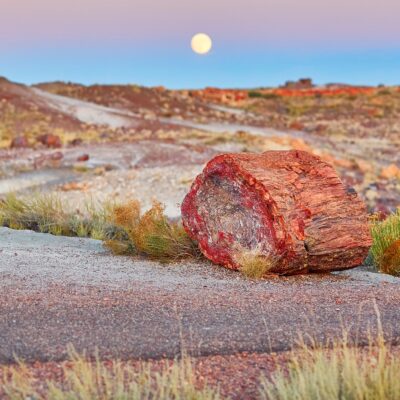