If you enjoy looking at the night sky or are tired of winter – or maybe both – here’s something besides Valentine’s Day to look forward to this week.

February’s full moon, known as the Snow Moon, will occur on Wednesday, February 16. If you enjoy looking at the full moon, here’s more good news: The moon will also appear full Tuesday and Thursday nights as well.

It isn’t difficult to figure out why February’s full moon is called the Snow Moon. After all, February is generally the United States’ snowiest month.

The Old Farmer’s Almanac explains that the names it uses for moons come from numerous sources, including Native American and European sources. Snow Moon is one of the names used by Native Americans for February’s full moon.

“In the 1760s, Captain Jonathan Carver, who had visited with the Naudowessie (Dakota), wrote that the name used for this period was the Snow Moon, ‘because more snow commonly falls during this month than any other in the winter,’” The Old Farmer’s Almanac explains.

That may be the case, but bad weather and heavy snow also made it difficult for Native Americans to hunt and find food. That’s why some North American tribes also called February’s full moon the Hunger Moon, NASA notes.

“In China, the Full Snow Moon is celebrated during the Lantern Festival, also known as the Yuanxiao Festival, which is the 15th day of the Lunar New Year,” a Moongiant article explains. “During this festival, the Chinese release kongming lanterns into the sky as they admire the full moon and eat tangyuan, glutinous rice balls that are usually filled with sweet paste. The round shape of the balls symbolizes family togetherness and brings good luck to the whole family.”

You can learn more about Lunar New Year here.

A full moon occurs when the moon is opposite the sun in its orbit around Earth. When this happens, the side of the moon visible from Earth is entirely illuminated – appearing “full.”

When the sky becomes dark, you will also be able to see a bright star close to the moon. That star is Regulus, which is the brightest star in the constellation Leo the Lion.

Here’s the fun part. The moon will technically only be full precisely at 11:57 a.m. Eastern. However, to the unaided eye, it will appear full Tuesday night, Wednesday night, and Thursday evening until about midnight.

Because the moon will stay up all night and be high in the sky around midnight each night, you’ll have plenty of time to look at the moon – weather permitting.

The Next Full Moon

The next full moon, known as the Worm Moon, will occur on Friday, March 18, at 3:17 a.m. Eastern. March’s full moon gets its Worm Moon name because earthworms typically begin to emerge in March in the Northern Hemisphere as soil temperatures rise and the ground thaws.

If you enjoy looking at the night sky, be sure to read all of our Stargazing coverage, including 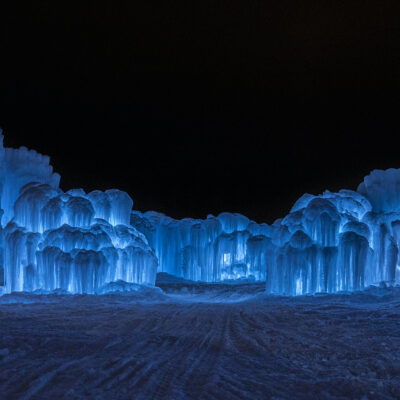