9 Reasons I Decided To Buy A Second Home In Panama

The country of Panama — important to the United States with the stewardship of the Panama Canal until December 31, 1999, and to my family based on people we’ve met through The Carter Center and President Carter — remains a wonderful place for expats to live overseas as described here.

Since control of the Panama Canal reverted to Panama, it has blazed a trail of economic advancement and prosperity. Panama City bustles with new growth, from skyscrapers to additional metro lines. And it’s expanding to the country.

Long before I’d read that article, I’d decided to buy a second home in Panama, in Playa Caracol, the best surfer’s beach in the country, we think, just an hour west of Panama City.

Those of you who’ve followed our story know that I purchased a property in Dublin, Ireland, and live there when I can. This was a high expense choice, with a higher cost of living than the United States made because of family education needs and heritage. Three of my eight great-grandparents have Irish roots.

But, much as I love Dublin, and I do, the winters are long and dark and sometimes dreary. Tommy Graham, a fast-talking, fast-walking tour guide who’s also the editor of History Ireland once said about Ireland, “Where many are cold, but few are frozen.” He’s spot on.

So when I was offered the opportunity through Irish-born Ronan McMahon to purchase a condo in Playa Caracol, with a group discounted rate from the builder, and performed my due diligence, I jumped at the chance.

You see, this area was farmland until just a few years ago when the family agreed to sell it to a trusted developer. And the Path of Progress, Panama’s government’s way of increasing tourism and improving infrastructure, was underway, making the trip from Panama City to Playa Caracol enjoyable.

The developer’s goal was to recreate what life was like living in 1950s Huntington Beach, California, but with high-speed internet, cable TV, and cell phones.

And the initial phases of development prove he’s done it.

These are my reasons for buying a second home here:

After experiencing higher rather than lower cost of living in Dublin, I really enjoy the “kick back” lifestyle of being at a beach, a surfer’s paradise no less, and not thinking about the expenses the way the electricity meter turns — whirring away oh too quickly.

Here, since the condo will be paid off before I move in, I’ll have some utility bills and taxes to pay, but that’s all.

It’s true that the supermarket doesn’t have all my favorite brands, but I’ve become accustomed to that in Ireland. What I am truly brand specific about, I can order from Amazon or pick up on one of my trips to the United States. It’s easy to find substitutions for most.

I bought a two bed, two bath lock-off for $162,000. Without the discounts from the Path of Progress, it could’ve easily been double that. And it comes turnkey ready, complete with furnishings (valued at $17,000).

The ability to rent it out from the pre-existing management company whenever I’m away made it an easy decision. With that one bed, one bath, and kitchenette locked off, I can rent that out whenever my family isn’t here. Enough to pay all utilities and taxes, and usually, even cover any of my living expenses. It’s a microcosm of the American duplex.

It was a win-win-win because Panama benefits from the extra tourism, too.

After my time in Belize, I learned that temperatures in the 70s or 80s Fahrenheit is my sweet spot. I don’t mind the rain, having lived in Seattle, but having the warm rain makes a big difference to me over rain itself.

Panama typically remains in the 80s.

And there’s the beach. I don’t have a direct view, my condo is over the common area, but it’s about 240 steps to the beach, and I’m amidst warm water ready to take my next surf lesson in minutes.

I’ve been hard-driven to accomplish things throughout my life. Accepted to medical school at 15, it’s difficult for me to turn that off. It’s nice to learn how to just “be.”

The place I’ve found it easiest to do that is at the beach. I’m not great at it yet, I’ll admit, but it is fun trying.

Everyone in Playa Caracol seems to be either an expat or a tourist. No one needs to be in a hurry to do anything. When someone is super rushed, we all know they’re either just arriving and haven’t caught the vibe yet or are in a rush to get to the airport. No worries. We just let them move ahead of us, taking the unpleasant, overly harried, and very hurried selves with them.

It may be part of the Pura Vida that Costa Rica has fashioned for itself, but it’s also kindness and patience that I’ve often found lacking in large cities.

I’ve taken Spanish since I was in high school, but I think it’s fair to say it remains rudimentary. My daughter’s Spanish is much better. But with the close association with the United States and the number of expats in Panama, many people speak English. Those that don’t are very patient with those of us that try.

And the language apps on your phone come in handy.

If you’re respectful and learn the gracious phrases:

Sincerely, it’s about being patient, kind, and respectful. It’s a good lesson to be reminded of for ourselves as well as others.

5. Proximity To The United States

While I’m enjoying my travels abroad, I have a daughter currently in the United States who is likely to make me a grandmother one day.

I fully intend to be present in my grandchildren’s lives and need easy access to the U.S.

Panama makes that easy. Just a few hours from Houston or Miami, you can connect from there to the rest of the U.S.

I haven’t had the need to receive healthcare in Panama yet but am told that the quality is excellent and the price quite affordable. I’m not the right age yet for the Pensionado Program in Panama but it won’t be long.

Knowing that I can get all the medical care I need and that the need is likely to remain low as I continue to be active, work to maintain an ideal body weight, and eat food grown nearby, makes it possible for me to rest easy at night.

When I’m eligible, I’ll enjoy the benefits of the retirement program. The visa that allows permanent residency makes it easy.

The discounts on movies, sporting events, transportation, and hotels make it fun. I can go explore this new country at reduced rates and have more stories to share with you all.

Everyone’s reason for choosing where they live abroad is different. For me, the combination of Dublin in the summer, when it’s beautiful, cultural, and exquisite, and Panama in the north’s winter — where it’s airy and warm and there’s always more to do … especially the “nothing” of a day at the beach surfing — is the perfect combination for me.

Like Ireland, this part of Panama is quite safe. I feel confident walking around alone any time of day or night. It is a protected little slice of heaven, off away from the big city, but that’s its own advantage, too.

As a solo woman, I couldn’t consider retiring to an area of civil unrest or imminent danger. And I have a daughter to consider. She needs to feel safe getting to and fro, someday bringing her family as well.

9. Other Americans To Talk To

While I wouldn’t want to live in a place outside the United States that was exclusively Americans (or else why would I leave?) it’s nice to strike up a conversation in an easy, native American-English pattern.

You’ll meet people from across the country and often from your home state. Being from the east coast originally, it’s easy to find people from Washington, D.C., New York City, or connections to them.

Comparing notes about the best museums or restaurants on a return trip to the states can be a game all its own.

But planning a new adventure here consumes more of our time. We live at the beach. Anyone want to head for the mountains?

We’re on an extraordinary piece of land where we can walk for miles along the shore.

It’s a wonderful lifestyle. And I feel like I have the best of both worlds: the culture and bustle of Dublin and the calm and relaxation of Panama.

Pro Tip: While Delta, United, and American Airlines all fly to Panama City, American tends to have the shortest layovers and the most direct flights from the United States.

To learn more about retirement and what is attractive about Panama, read these TravelAwaits articles: 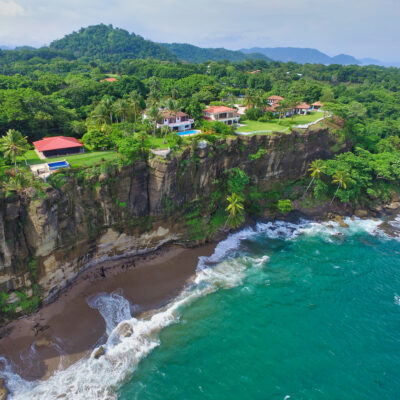