13 Luxurious And Unique Foods To Try In New Brunswick

New Brunswick may just be Canada’s most underrated foodie destination. This small eastern province is blessed with great farmland, plenty of coastline, and a warm, welcoming population that takes hospitality to the next level. I’ve been enjoying New Brunswick’s delicious delicacies my entire life, first on family vacations, later on, long seasons of summer camp, and finally on my own road trips later in life (including a press trip this year). I’ve never had a bad meal and I’m convinced that the region is going to be one of the world’s next big gourmet destinations. On your next visit to New Brunswick, keep your eyes open for some of these luxurious and unique foods.

It’s impossible to talk about luxurious food in New Brunswick without mentioning lobster. However, the best way to enjoy this local staple is in the most unluxurious of settings: at a beachside cookout, at a lobster roll shack on a wharf, or served up with melted butter and cold salads at a community fundraiser or church hall. If you’re up for an off-the-beaten-path adventure, Ellis Take-out, a seasonal operation in the tiny community of Stonehaven, gets rave reviews from the New Brunswick locals I chatted with.

The humble ploye may just be the coziest food in all of New Brunswick. This delicious cross between a pancake and a crepe is made with a blend of buckwheat and wheat flour, plus water and baking soda. Early settlers in Edmundston and northern New Brunswick embraced the ploye and its use of buckwheat as a reliable alternative to the more finicky wheat crop. What emerged was a quick-cooking bread that was served at breakfast (as an alternative to pancakes), lunch (alongside soups and stews in lieu of rolls), and dinner (as a dessert). I love them best covered with butter and brown sugar but ployes are equally tasty with molasses or even cretons (a seasoned pork spread). Now almost exclusively served in private homes, you can still find ployes on the menu at Frank’s Bar and Grill in the Edmundston Four Points by Sheraton hotel or from vendors at the community’s farmers market.

New Brunswick’s tender green fiddleheads are a classic sign of spring that I look forward to each and every year. The province is one of the world’s leading producers of this vegetable, which is actually the tightly furled head of a young ostrich fern. In fact, the community of Tide Head is known as the “Fiddlehead Capital of the World.” These delicious greens are at their best when steamed with a bit of lemon juice and a lot of butter, not unlike asparagus or young beans. You can feast on fiddleheads throughout New Brunswick in early spring or enjoy them pickled year round.

For a small province, New Brunswick has an oversized craft beer scene and boasts nearly 50 breweries. Ten of those are located in the capital, Fredericton, giving the city roughly one brewery for every 5,400 residents. No wonder it’s known as Atlantic Canada’s Brewing Capital. A cider lover, I fell in love with York County Cider but I was equally captivated by the great vibes at Picaroons, a dog-friendly brewery that comes complete with its own “stick library” to keep pups occupied. Those exploring the city’s Taproom Trail will discover breweries with amazing food trucks and onsite restaurants, great live music and events like trivia competitions, and special little community-focused perks (like the $1 you’ll save on your first beer if you arrive via bicycle at Maybee Brewing Co.)

Potato chips certainly aren’t unique to New Brunswick but Canadians in the know will tell you that New Brunswick does them best. It’s not just because the province is a top potato producer. The Covered Bridge company makes kettle-style potato chips using potatoes that it grows. In addition to the usual classic flavors, it also pioneered a Canadian favorite: Storm Chips. Storm Chips are a mix of creamy dill, homestyle ketchup, smokin’ barbecue, and salt and vinegar chips, all packaged together in the same bag and ready to comfort anyone stuck in a winter snowstorm (or just wanting a little salty, tangy comfort food!) Its headquarters, which offers factory tours, is across the road from another great foodie spot: Moonshine Creek distillery.

Chocolate, just like potato chips, can be found all around the world but New Brunswick has a special claim to fame when it comes to this foodie fav. The town of St. Stephen, New Brunswick, is home to Ganong, Canada’s oldest chocolate and candy company. Since 1873, it’s been producing delectable chocolates in memorable ways. It was the company behind North America’s first candy bar (well, depending on who you talk to — the folks at Hershey’s were neck-n’-neck). And in 1932, it debuted North America’s first heart-shaped chocolate box. Its chocolate-covered cherries, Delecto peanut clusters, and Pal-o-Mine candy bars are iconic Canadian treats.

Ganong doesn’t just make chocolate. Its line extends to jelly beans, mints, fruit snacks, and… chicken bones. Yes, the name is a little odd. Chicken bones are a bright pink, rectangular hard candy whose shape resembles that of an actual chicken bone (assuming you use your imagination a bit). The hard candy tastes like spicy cinnamon and there’s a line of bittersweet chocolate running down the center of each “bone.” This spicy and sweet concoction is my favorite candy and a must-try item for anyone visiting New Brunswick. In addition to enjoying them as a snack, you’ll also find chicken bone flavored lattes, ice creams, and even liqueur. I grabbed my bottle at Moonshine Creek.

New Brunswickers are rightly proud of their Acadian culture, as well as their rich culinary heritage. The next four items all originate from Acadian cuisine.

Crêpes râpées is another tasty option. These potato pancakes are crispy on the outside but soft and moist on the inside and I love to eat them just like ployes: covered in butter and brown sugar. Maple syrup, jam, and molasses are all good alternatives.

Foodies keen to try something new will want to dig into râpée. A mix of grated potatoes seasoned with onion, pork fat, salt and pepper, and baked in a casserole dish until the top is golden and crispy. I have to admit it’s not my personal favorite (the chicken fricot is at the top of my list!) but many people just love it. You can try all three dishes, plus several more, at restaurants like La Sagouine in the community of Bouctouche.

Save room for desserts like pets de soeur. These baked pastry pinwheels are super sweet and not unlike a cinnamon bun. But the real treat comes when you say the name: pets de soeur translates to “nuns’ farts!”

Can seaweed really taste like bacon? Fans of New Brunswick’s dulse think so! This seaweed is primarily harvested off the province’s Grand Manan Island before making its way into snacks and grocery stores. Ganong makes a dulse truffle as part of its New Brunswick truffle collection (along with blueberry cheesecake, chicken bone, molasses, and maple). You can buy bags of this salty, savory snack at the Saint John City Market at vendors like Slocum & Ferris (who’ve been known to put a DLT (dulse, lettuce, tomato) sandwich on the menu as an alternative to a BLT). Dulse also features in its homemade “sea spice,” an alternative to steak spice.

New Brunswick is so pretty, it would be a shame not to enjoy some of its delicious foods al fresco. Just about everything on this list would taste better if it was enjoyed by the water but if you’d rather not prepare your own picnic, a local company can do exactly that for you.

Fredericton’s Sweet and Salty Grazing Co sets up dreamy, boho-inspired, Instagram-worthy picnics in the city’s public parks (including a riverside spot in Carleton Park, where I first enjoyed their services.) The company takes care of all the work, setting up plush picnic blankets, comfy cushions, a table complete with linens, candles, and wine glasses, plus fresh flowers, warm blankets, and even dog beds. Gorgeous “grazing boxes,” complete with cheese, cured meats, honey, nuts, fruit, and chocolate include local products (like Rabbittown Cold Brew Tea and Bear Bites doggy biscuits) complete the experience. Without a doubt, this New Brunswick picnic was one of the most memorable eating experiences I’ve ever enjoyed — and it was even sweeter since I didn’t have to take care of the clean-up!

While you’re in New Brunswick, enjoy these experiences: 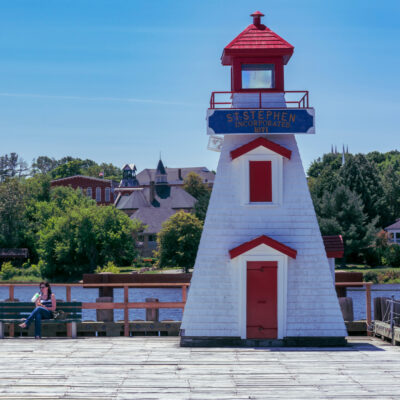 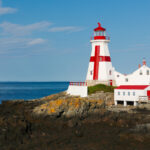