10 Reasons To Fall In Love With Buenos Aires, Argentina

Buenos Aires had long been on my mind before I finally got a chance to visit. I had a feeling that I would like the place, but you never know until you get there, right? The country had been in the news a lot because of the economic struggles, but I must admit that even when I saw people queuing outside banks on the news, I could not help but look at the background, and the architecture, and dream about seeing the city for myself. But the initial introduction was not what I had imagined.

When I arrived, I ended up sitting in the taxi from the airport for what seemed like hours. As we drove along modern roads, past modern residential areas, I was nearly disheartened. But then, we reached the warren of streets that is Buenos Aires, and the closer we got to the heart of the city, the happier my heart became. I was going to like this city after all.

And during my stay, I fell in love with the city for all sorts of reasons, whether it was a simple (or actually, not so simple) bookstore or a mechanical flower. Like all major cities around the world, Buenos Aires has grand old squares such as the Plaza de Mayo, and superb museums, such as the old Fine Arts Museum and the newer MALBA and MAMBA, but it was the quirkier aspects that won me over.

Upon leaving, I said to my husband that I could happily live in Buenos Aires to really get to know it. Maybe one day. For now, here are some of the reasons that made me fall in love with this Argentine treasure.

While many travelers start exploring a new destination through its history museums, my first stop was the Ateneo Bookstore, one of the best bookstores I have ever visited. Located in a former theater, the entire hall, and the boxes, even the stage, are filled with books, reading nooks and seating where you can enjoy a coffee with your books. I was blown away and would have moved to Buenos Aires just to be close to this store. Even if most books were in Spanish. I can always learn that language too, surely?

2. The Colors Of La Boca And La Caminito

The second thing that always draws me in is street art and colorful neighborhoods. And the neighborhoods of La Boca and the enclave of La Caminito are as colorful as any I’ve encountered. The individual houses have been painted in all the shades under the sun, and then some; the walls and any spare city canvas were covered in murals and street art, and even the cobblestones at the entrance to the neighborhood were individually painted. The entire place is so photogenic and Instagram-able, that I spent all day just taking pictures. Add the market that is open every day, but is at its best on weekends, and the odd stray dog sleeping on a brightly painted doorstep, and I fell in love with the entire neighborhood. Yes, it’s touristy and in places rather gimmicky, but I was a tourist, so no harm.

Outside the National Museum of Fine Arts, near the Plaza de las Naciones Unidas stands a 100-foot-wide metal flower. Made from shiny steel and aluminum, the petals and the four stamens catch the sun and reflect life around it, making it very photogenic. But in addition, this enormous flower opens in the morning and closes at nightfall, glowing red in the dark, making it quite magical. Only four nights a year the petals stay open all night: May 25 (May Revolution), September 21 (start of spring), December 24 (Christmas Eve), and December 31 (New Year’s Eve).

Steps away from Floralis Generica lies the old cemetery of Recoleta. Until I lived in Paris, I would never have visited a cemetery but there are cemeteries and then there are cemeteries, and this one is as atmospheric as Père Lachaise in Paris. Crowded with individual tombs, the lanes are narrow, and it is worth taking your time just looking at the statues and sculptures dotted around. The most famous “inhabitant” of this cemetery is Evita Peron, you will find her grave easily enough, as it draws tours and crowds.

5. The Neighborhood Of Palermo

If I were ever lucky enough to move to Buenos Aires, this would most likely be the neighborhood I’d move to. My hotel, the fabulous Vain Hotel, I highly recommend. The service, location, and facilities are superb, as is the breakfast. Steps away, you have restaurants and bars around the Feria de Plaza Serrano, and a surprising number of lovely bookstores-cum-cafes next to superb individual shopping boutiques. I would move there tomorrow.

If you love Paris as much as I do, then you’ll love Buenos Aires. The architecture is, in places, reminiscent of Paris, if not for tending a little toward the shabby and formerly chic. But step out along the avenues leading off Plaza de Mayo and you could be in the heart of Paris. Add old-fashioned cafes such as Café Tortoni and you’ll see what I mean. It even does breakfast with croissants, but with the added bonus of churros on the side. I mean, what’s not to love?

And talking about food, this is the home of Dulce de Leche, creamy caramel goodness that is perfect on toast; empanadas, which can be a little hit and miss; choripan, which is the local version of a hot dog, only better; and arroz con leche, a sticky milk rice with cinnamon. Not being a huge red meat lover, I still appreciated the local steaks, cooked the Asado style, and in the afternoons partook in the local love for all things cake, cookies, and sweet pastries such as the pastelitos and the double-decked cookies, the alfajor, which also come with dulce de leche in between them. Sweet but perfect for an afternoon respite after a long day of sightseeing.

8. The Proximity Of Uruguay

The lure of another country a mere ferry ride away is difficult to resist. And, for a German of a certain age, the chance to visit Montevideo is even stronger. When I was little, I watched the old black-and-white film, Das Haus in Montevideo, (1951) about a funny — and for those times quite risqué comedy — about a house in Montevideo. I could not resist having a look. Alas, I did not find the house but loved exploring Montevideo’s many lovely streets, cafes, and restaurants serving fabulous food (try Jacinto for lunch), making the ferry ride well worth it.

9. The Bustling Avenida 9 De Julio And The Avenida Corrientes

The Avenida de 9 de Julio has an entry in the Guinness Book of Records reading like this: “The widest avenue in the world is the Avenida 9 de Julio, Buenos Aires, Argentina. Its incredible span of around 110 meters, 16 lanes of traffic plus landscaped medians, occupies an entire city block. Construction began in 1935 and was largely completed by the 1960s.”

It is not the prettiest of avenues, as it comes at the end of the Paris-like avenues and is a bit of a shock to the system. But, with its huge mural of Evita Peron, it is very much an integral part of Buenos Aires. Walking along it is great, I would not want to get lost in the traffic though, to be honest. But walking along until you reach the obelisk and then turning off into the Avenida Corrientes, with its shops and bars and many neon lights, makes it one of the great streets of Buenos Aires and worth exploring.

Walking down Avenida Corrientes brings me to my next reason to love Buenos Aires: the Tango. During its heyday in the 1930s and 1940s, the many theaters down Avenida Corrientes were abuzz with tango shows and displays. Today, you can still enjoy tango dinner shows at the beautiful Café de Los Angelitos, but it is more fun to wander around the neighborhood of San Telmo and watch the impromptu tango displays of local dancers in the many squares.

If you explore this neighborhood on a Sunday, you’ll not only find superb and eclectic markets spreading out across Plaza Dorrego and Defensa Street, but also countless street performers and dancers. Take time to sit somewhere on the square and just enjoy the spectacle. Many visitors want to learn to dance the tango when they come to Buenos Aires, and there are plenty of schools or shorter lessons available, but to me, just soaking up the atmosphere and watching what the locals do best is enough.

Pro Tip: Buenos Aires is huge, and while lots of the individual neighborhoods are eminently walkable, sometimes it just saves time and effort to hop on the extensive metro system. It is cheap and with a metro pass, easily managed.

Also be aware that Buenos Aires has two airports: international and domestic/regional. While you will most likely arrive at Ezeiza airport (EZE), if you want to visit Iguazu Falls, you’ll be catching a flight from Aeroparque Jorge Newbery (AEP) airport.

Argentina offers a wide range of activities and sightseeing for the curious visitor: 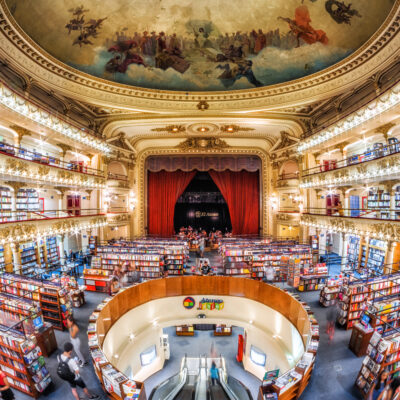 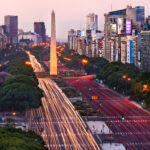 Buenos AiresI Tangoed For The First Time In Buenos Aires, And Here’s How It Went 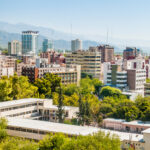 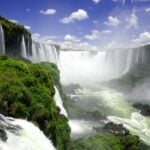