Grand Canyon Lovers, Here’s Why You Should Visit Black Canyon Of The Gunnison

There’s no other way to put it: The Grand Canyon is majestic and awe-inspiring. That’s partly because the walls of the 1-mile-deep canyon, located in Grand Canyon National Park, reveal layered bands of colorful rock. Then again, since the canyon itself is up to 18 miles wide, the panoramic vistas simply must be seen to be believed.

Grand Canyon is also one of our most-visited national parks. In fact, in 2020 — due to COVID-19 related park closures and fewer people traveling — Grand Canyon National Park only had 2.9 million visitors. That number was down from six million visitors in 2019.

If you want to see the Grand Canyon but can’t travel to Arizona, don’t want to deal with those crowds, or both, here’s some good news. The Black Canyon of the Gunnison is similar to the Grand Canyon — just smaller.

Sometimes referred to as “Colorado’s own Grand Canyon,” Black Canyon of the Gunnison National Park is about a 5-hour drive from Denver. If you want to avoid crowds, you’re in luck; in 2019, the park averaged about 432,000 annual visitors, according to the National Park Service (NPS). Those numbers made it the least-visited park in Colorado.

If you’ve never heard of it before, here’s why you’re going to love a trip to the Black Canyon of the Gunnison National Park.

The 48-mile-long Black Canyon “is incredibly deep and sheer, with plunging cliffs, soaring buttresses, and a thundering river,” the NPS explains.

It’s also very narrow in places. For example, at Chasm View, the canyon is 1,820 feet deep, but the rim is just 1,100 feet wide. Meanwhile, at the appropriately named The Narrows, the canyon is only 40 feet wide at the river. The effect is that the canyon constricts the Gunnison River so much that the sound of its roar can be heard at the rim.

Pro Tip: The canyon’s narrowness also explains its name. The canyon walls are so steep, and the rim is so narrow, that parts of the canyon only receive half an hour of sunlight per day. The resulting shadows make the walls appear black — hence the name Black Canyon.

Colorado’s highest cliff is the Black Canyon’s Painted Wall, named for what appear to be giant brushstrokes across its face.

The distance from the Painted Wall’s rim to the river is a staggering 2,250 feet. For comparison, Colorado’s Royal Gorge is 1,053 feet deep.

The North Rim, which is 11 miles southwest of Crawford, Colorado, is reached by driving along a 7-mile gravel road. The road, which is closed in the winter, provides access to six scenic overlooks.

What’s noteworthy is that the canyon walls on the North Rim are almost vertical, offering some of the most impressive views found in the park. You should plan to allocate 2 to 3 hours so you can enjoy a leisurely trip on North Rim Road.

The South Rim is the more developed — and busier — side of the canyon. South Rim Road, which is paved, leads to 12 scenic overlooks. Most of the overlooks may be reached by taking a short trail. Again, you should allow at least 2 to 3 hours for the trip.

Pro Tip: If you only have a limited amount of time for the scenic drive, the NPS recommends at least stopping at Gunnison Point, Chasm View, Painted Wall, and Sunset View overlooks.

If you want to drive down to the Gunnison River, you’ll need to take East Portal Road. Although the road is within the Curecanti National Recreation Area, it is accessed from the South Rim.

Pro Tip: Although the road is paved, it is extremely steep — with 16-degree grades and hairpin curves. Consequently, vehicles that are longer than 22 feet are prohibited on East Portal Road.

The area around the Black Canyon is a hiker’s paradise. Hikers will need to be cautious, however. Many trails pass by steep drop-offs and bears are most likely in the area. You can learn to “be bear aware” while hiking by following this guidance from the U.S. Forest Service.

There are five trails you can hike from the South Rim. Two trails are rated “Easy,” while another two are “Moderate.” Finally, the 2-mile round trip Oak Flat Loop Trail is “Strenuous.”

On the other side of the canyon, the North Rim offers three hiking trails. One is “Easy to Moderate” while another trail is rated “Moderate.”

Then there’s the North Vista Trail. The 3-mile “Moderate” loop leads to Exclamation Point, which offers an amazing view of the inner canyon.

If you are inclined and prepared, you can continue on to Green Mountain – but note that the loop is “Strenuous” and turns your hike into a 7-mile trip. The journey is worthwhile: The NPS explains that you will “be rewarded by panoramic vistas, including the San Juan Mountains, the West Elks, Grand Mesa, the Uncompahgre Plateau, and an aerial perspective of the Black Canyon.”

The five-mile Deadhorse Trail on the North Rim is the only area open to horses or pack animals for recreational riding in Black Canyon of the Gunnison National Park. No permit is required.

Pro Tip: There are no facilities in the park for horses. They are only allowed in the North Rim Campground or on the North Rim Road while being transported in a trailer. You can find all of the details here.

The Gunnison River within Black Canyon of the Gunnison is designated as “Gold Medal Water & Wild Trout Water.” Streams and rivers in Colorado receive that designation from the state’s wildlife commission when they provide outstanding angling opportunities for large trout.

Pro Tips: If you plan to fish, keep in mind that you can only use artificial flies or lures, and not bait. Also, you must catch and release all rainbow trout. For brown trout, the daily bag limit is four, while the possession limit is eight. Finally, as you expect, all anglers must have a Colorado fishing license.

As is the case in all national parks, camping is only allowed in designated campgrounds. No overnight use is allowed along any park roads or trails, at overlooks, or in other developed areas.

Black Canyon of the Gunnison has two campgrounds — one on each rim. These developed campgrounds have designated campsites, restrooms, and potable (treated) water.

The South Rim Campground is located one mile from the South Rim Visitor Center. It has 88 campsites, but only 23 offer electric hookups. The sites, while shaded, are fairly close together.

Pro Tip: Don’t take chances on campsite availability. You can reserve a campsite in advance here.

The remote North Rim campground has just 13 sites — with no electric hookups. Campsites are available on a first come, first served basis. Although the campground itself is small, the sites are large and spread out among pinyon and juniper trees.

Pro Tip: In the North Rim campground, the maximum combined length of RV, car, and/or trailer is 22 feet.

Black Canyon of the Gunnison National Park is certified as an International Dark Sky Park with a primordial dark sky, which means it’s perfect for stargazing.

Pro Tip: The best nights for looking at stars and planets are during the new moon phase or when the moon rises late because moonlight doesn’t illuminate the night sky then. You can check moon phase, moonrise, and sunset times for Black Canyon here.

Black Canyon offers spectacular rock climbing for expert rock climbers because the canyon is so deep and narrow. That said, it’s imperative to note that the NPS says the canyon is a “full-on adventure climbing area” because all of the routes are multi-pitch, traditional routes located in remote areas within the canyon.

Pro Tip: The NPS does not guarantee rescue, so all climbers must be prepared for self-rescue. You can learn more about climbing at Black Canyon here.
As you begin to plan your trip, be sure to read all of our Black Canyon of the Gunnison National Park and Colorado coverage. While you’re at it, don’t forget our Grand Canyon coverage and all of our national parks in the U.S. coverage. 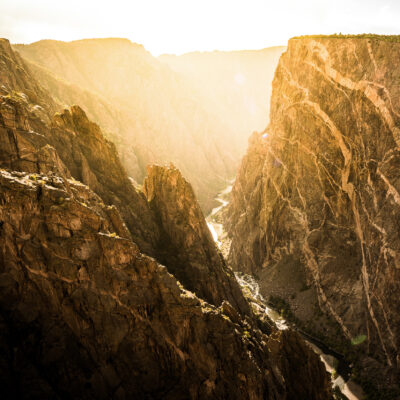 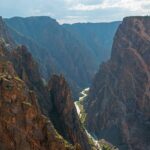