10 Romantic Small Towns To Visit In The United Kingdom

England, Scotland, Wales, and Northern Ireland make up the United Kingdom, the island country surrounded by the North Atlantic and the North Sea in Northern Europe. Relatively small it may be, but the UK features an incredible variety of landscapes, from beaches, steep cliffs, and mountains to valleys, dense woods, moors, and rivers. Everywhere from north to south and east to west, small towns and villages nestle among these treasures of nature, romantic because of their locations and the style of the houses, often stone cottages overgrown with roses and wisteria, with shingle or thatched roofs. Each one of the dwellings I discovered on my many tours around the island has its own history and individual charm. One picture postcard after the other.

Whitby is the quintessential small seaside town, located in North Yorkshire on the mouth of the River Esk, which divides the town into two parts. The sea on one side and the high grounds of the North York Moors National Park on the other make for a picturesque location. The east side is the older of the two parts with the ruins of Whitby Abbey standing on top of the cliff. Author Bram Stokes used the abbey as inspiration for his famous novel Dracula. The abbey is reached via 199 steps from Church Street, which is lined with houses and cottages dating back to the 15th century. Stroll around the 1640 marketplace and get Whitby’s most sought-after souvenir: the Whitby jet, the black jewelry made popular by Queen Victoria who wore it until the end of her life after the death of her husband.

On the other side on top of the Khyber Pass stands the Whale Bone Arch that commemorates Whitby’s past as a center of whaling. Whitby’s most famous son is Captain James Cook, who was taken on as an apprentice on a small navy vessel here to learn the trade. There is also a Cook Museum. If you can make it in April or November you can step back in time and experience the Whitby of old, as fans of Dracula organize a few days of festival to remember Dracula’s arrival in the form of a shipwrecked black dog, all dressing up in period costume.

Cornwall is a peninsula in the Southwest of the UK, bordered on the north and west by the Atlantic Ocean. The southwesternmost point is called Land’s End. St. Ives is a seaside resort on the western shore of St Ives Bay, a sheltered harbor. Whilst originally a fishing town, it became a popular summer resort in Victorian times. This is due to having the warmest climate in the UK and possessing four beaches. Porthmeor is popular with surfers whereas Porthminster features nearly a half mile of fine, white sand. Apart from being a seaside resort, St Ives is best known as an artists’ colony and for her many art galleries, foremost the famous Tate St. Ives. For a touch of history, find Sloop Inn. Dating from around 1312, it’s one of the oldest pubs in Cornwall. You can stay there, too. A branch of The Great Western Railway leads along the coastline.

Don’t even try to pronounce this or any other Welsh names. Llandudno is another seaside resort, located on the Creuddyn peninsula that juts out into the Irish Sea. Great Orme is a limestone headland on one side, and a nesting place for rare seabirds. The opposite is called Little Orme. If you want to experience a typical Victorian seaside resort with all the attractions that were popular at the time, Llandudno is the place to come to. North Shore has a mile-long beach, in part pebble, and West Shore features a more sandy beach. In between runs the biggest attraction, the Pier, an Indian Gothic extravaganza built in 1878 that has cafes, restaurants, rides, and amusement arcades. Alongside leads a typical Victorian promenade, locally known as The Parade. It’s lined by the best hotels.

The summit of Great Omre is reached by tramway or a cable car. Don’t miss the opportunity to look at the herds of Kashmiri goats that graze peacefully on the slopes. For more Victorian traditions, visit during the May bank holiday when a Victorian carnival is held for three days.

If you are a golfer, there is no better or more historical place to pursue your favorite sport than playing a few holes in St Andrews. Widely known as the Home of Golf, the oldest golf course was established here in 1754. St Andrews, located in Fife on the east coast of Scotland, is the seat of the oldest university and of a cathedral that was for centuries the largest building in Scotland. After your game of golf, you may fancy a walk along the spectacular west beach with sand dunes, which was featured in the opening scene of the movie Chariot of Fire. Or else, stroll along the scenic footpath of the Lade Braes Walk or visit the botanic garden. A great photo opportunity presents itself in the form of the ruins of the castle perched on top of a high cliff right over the crashing waves of the sea.

Located in the southeastern part of the Peak District, Matlock is a small town nestling in a deep valley flanked by climbing hills. The River Derwent runs along the bottom, used in times past to power the region’s many cloth, corn, and water mills. Thermal springs fed Matlock Bath, which is up the hill. The town’s many historical Victorian buildings, including old inns, reflect life when several industries like lead mining were flourishing. Today’s attractions include the Hall Leys Park, a Victorian park with a bandstand and a boating lake, and Gulliver’s Kingdom in Matlock Bath, a paradise for kids.

If you are an avid and rather fit hiker, then know that Matlock is in the vicinity of the Peak District, which will be heaven for you. Hike along Lumsdale Valley, a steep, wooded gorge, or explore Cromford Mills and the Cromford Canal with its colorful barges and occasional houseboats. Venture into the Cromford Moors and see the Black Rocks, so called because lead was once mined here. The Derwent Valley is a UNESCO World Heritage Site because of its wild natural beauty.

Penzance is located in the extreme southwest of Cornwall, sheltered by Mount’s Bay and facing the English Channel. The port town has made this list because of the many Regency and Georgian houses the line Chapel Street, foremost among them the eccentric Egyptian House. The mild, subtropical climate will be a pleasant surprise, allowing two fabulous gardens to have been created: Morrab Gardens with palm and banana trees and Trengwainton Gardens. Wandering among these trees and flowers, you will forget that you are in the generally cold and wet UK. Penzance, as a once-fashionable Victorian seaside resort, also has a unique attraction: the seawater outdoor pool called Jubilee Bathing Pool. The triangular pool with soft sweeping curves is the oldest and largest art deco pool in the country.

Pro Tip: If you have a few days in Cornwall, don’t miss a ferry ride to the even more tropical Scilly Isles. You can also go by helicopter.

The pretty market town of Penrith sits in the Eden Valley, just three miles outside of Lake District National Park. It’s bordered by rivers and is a must-visit for history fans because of its castles and many stately homes. The nicest is no doubt the well preserved Brougham Castle, romantically located in green meadows on the shore of the River Eamont. Love older history? Then visit one of the largest Neolithic stone circles, 59 stones, many upright, locally referred to as Long Meg and her daughters.

This town is often referred to as the capital of the Cotswolds, one of the most romantic places in England, known for its quaint stone cottages covered with thatched roofs and the proverbial climbing English roses. It’s one of the most touristy parts of the country but that shouldn’t stop you from visiting and walking a part of the Thames Path or having a traditional tea with scones and clotted cream in the 17th-century Black Horse pub.

Known as the gateway to the rough landscape of the Yorkshire Dales, Skipton is a market town, closely connected to the centuries-old sheep and wool trade. Dominated by the massive Skipton Castle, the town is surrounded by the River Aire and the Leeds and Liverpool Canal. It is an ideal location for excursions into the unique landscape of the Dales. The sheep trade is celebrated each first Sunday of July during the Sheep Day festival.

Another tongue twister of a Welsh name, Aberystwyth, located at Cardigan Bay on the west coast of Wales, sits between three hills and two beaches. It’s a university town and the most important cultural center of Wales, which makes for a lively atmosphere. Highlights are to climb up Constitution Hill to watch the sunset and to walk along the promenade and pier. In Victorian times, it became a popular seaside resort, once also referred to as the Biarritz of Wales. 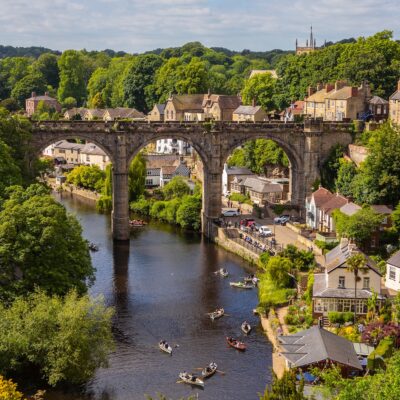 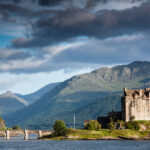 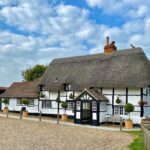 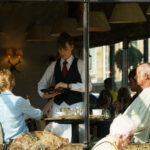