While many people have Machu Picchu on their bucket list, neither my daughter nor I were amongst them. When the opportunity arose, I went because of my interest in travel and photography. She went to humor me. I’d never been particularly enthralled by the photos of Machu Picchu. I mentally understood the importance of an ancient city, captured en toto as if the entire population had suddenly been run off.

But standing on the terraces, overlooking the Citadel, and walking within it, where a city of people lived, loved and died hundreds of years ago, I understood the mystical and spiritual nature of the place as no photograph could quite capture.

Which makes this the perfect time to plan your trip so you can, too. With forethought, you can maximize your time at this UNESCO World Heritage Site.

A Quechua phrase meaning “Old Peak,” Machu Picchu, the best surviving representation of an Incan City, built in the middle of a cloud forest around the 15th century, sits 2,430 meters high in the eastern mountain range of the Peruvian Andes.

Its mysterious abandonment, estimated just 80 years after construction, adds to the dramatic pull to this remote, high altitude location and has contributed to its becoming one of the New Seven Wonders of the World.

Yale archeologist Hiram Bingham rediscovered Machu Picchu in 1911 and brought publicity to this deserted city, untouched by the Spaniards’ conquest, opening a new door to imagination and contemplation over what happened to the original inhabitants.

Visitors have the option to trek the 26-mile Inca Trail, with porters (think Sherpas) to haul what’s needed or use the combination of plane, train, bus, and shoe leather to explore the surrounding area and reach this spirit-filled destination.

The Incas worshipped the life-giving properties of the sun and worshipped the sun god’s wife, the moon. Harmony and mysticism somehow embraced the duality of the culture, and transformed the architecture.

The structure reveals complex irrigation systems, farming terraces, and living quarters for royalty, nobles, and servants. It showcases the incredible engineering required to move stones — many weighing over 50 tons — from a distance … completely without wheels then constructed so tightly without any form of mortar that it’d be difficult to get a razor blade to fit between. The perfectly interlocked stone roofed with straw is characteristic of this period.

If you’re part of a photography group, as I was with the Great Escape Photography Expedition, your tour package is likely to include the afternoon before and then an early morning photo session. That’s your best chance for sunset and sunrise photos. If you’re as lucky as we were, you’ll get what photographers call the “mustache” photo … clouds wafting across Huayna Picchu in the dawn.

In addition to a tour of the Citadel, there are several other things to do while in this UNESCO World Heritage Site. The more you know about them in advance, the better you can plan your journey to maximize your experience.

Also known as Waynapicchu, this mountain stands guard over the Inca Citadel. This hike is the most desired experience in Machu Picchu, so be certain your tour company makes reservations months in advance. It’s another 300 meters above the Citadel with slopes up to 60 degrees. Many consider it to be one of the most amazing short walks in the world.

Only 400 people can access their trails each day. Plan your attack on the Citadel so you can see it all. Be warned, if you wind up at the exit accidentally, they will not let you retrace your steps.

Climbing to the top of this summit is challenging. The roads are steep, and the cliffs appear dangerous. If you stick to the well-marked paths, though, the more treacherous parts near heart-racing ravines have safety ropes to hold onto.

This mountain has zigzagging paths and staircases carved from stone. When it rains, it’s common to see visitors descend on their bottoms – slipping down to the next step one bump at a time, rather than risk a dangerous fall.

2. Temple Of The Moon

As the Incas built stone paths, they built a stone cave called the Temple of the Moon, less than 400 meters from the summit of Huayna Picchu. It’s open faced and shallow wherein the center stands a throne carved from rock with steps nearby that lead deeper into the cave.

The Citadel has two parts, Hanan (upper part) and Hurin (lower part), consistent with the principle of Dualism popular in Andes Society. They recognized that nearly everything, from cities to mountains, to astronomical features, had a complementary side, including Mother Earth (Pacha Mama) and the Rain (Pacha Tata) peacefully coexisting.

4. The Temple Of The Sun

The Temple of the Sun is a semicircular building erected on a huge solid granite rock. The natural cave beneath it is thought to have been the Royal Tomb. Inside the temple is a carved stone between two windows, one facing north and the other facing west. The windows’ shade perfectly align during the solstices and equinoxes.

5. Temple Of The Condor

The Condor symbolized the upper world to the Andean people. As you near the end of the Citadel tour, if you don’t know where to look, you will miss the condor. The face is at ground level and the wings are created by two rock walls. The guide may be anxious to keep people moving forward. Allow the crowds to pass and take your photo (but don’t do what we did … don’t stand in the window to try to get a better photo).

6. Temple Of The Three Windows

On the west side of Machu Picchu, at the very heart of the urban sector in the main plaza, stands the Temple Of The Five Windows, of which three remain.

The three windows are said to represent each part of the world: the heaven (Hanan-Pacha), the present surface (Kay-Pacha) and the underground (Uku-Pacha). Sunrise is beautifully displayed within this temple.

At the highest part of the Citadel, in the main plaza, you’ll find “Wayrana,” Quechuan for “a very windy place.” This three-sided temple leaves room for the wind to enter, and it does! Inside, you’ll find a carved rock that represents the Southern Cross. The temple was used to celebrate rituals for the “creator of everything in this universe.”

Located in the main plaza, the Intihuatana, Quechuan for “A place where the sun is tied,” is a four-sided, flat-surfaced carved rock measuring 1 x 2 meters. Each side represents a cardinal point indicated by shadow at the solstices or equinoxes. Modern day astronomers consider this stone work as an astronomical observatory and solar clock.

Llamas are surprisingly nimble on the steep steps between terraces. While they will take their right of way, it’s worth the climb to the top terrace to peer down at this ancient civilization site. Take someone you love, as I did with my daughter, and have some time and space together, away from your tour group. You may be surprised by the new perspective.

Most people don’t realize the sheer number and volume of stairs throughout the site. The altitude change is a shock to most systems. Be prepared to stop and rest regularly, and drink plenty of water.

11. Hike To The Intipunku

The hike to Intipunku, Quechua for “Sun Gate,” took us nearly three hours round trip. It’s another 290 meters above the Citadel. Many find the steep path challenging. Complete this hike before your tour of the Citadel. Be sure not to underestimate how long it takes so you won’t be late.

Called the Sun Gate because the sun’s rays pass there during the summer solstice, it was used as an entrance gate by the Incas. More than anything, when you reach it, you’re likely to feel the same sense of accomplishment we did conquering the hike.

The actual Montaña Machu Picchu faces Huayna Picchu. Moderately difficult, this hike takes an average of 4 hours, round trip. The wide paths made of stone are easier to climb than those on Huayna Picchu, but its highest point soars to 3,082 meters (10,111 feet) or 600 meters above the Citadel.

At the Machu Picchu exit, look for the table where they keep a passport style stamp. It adds to the memory of this grand adventure. 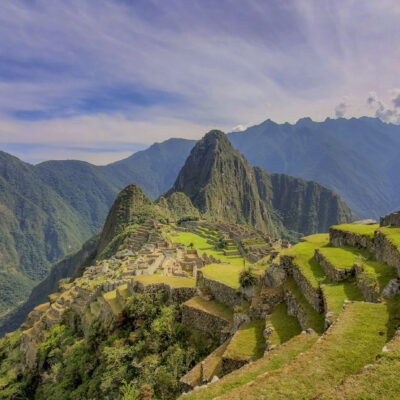 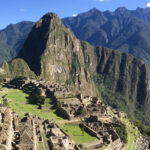 Machu PicchuPlanning A Girls Trip To Machu Picchu: What To Know Before You Go 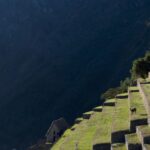 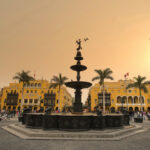