How To Spend A Perfect Weekend In Taipei, Taiwan

With strong influences from nearby China, Japan, and the Philippines, Taipei deftly showcases the best of the region’s foods, traditions, and history. And although it is first and foremost a modern city, I was struck on a recent visit by how well Taipei melds its contemporary vibe with its ancient past.

While the city of more than 2.6 million people warrants a longer stay, visitors could take in a number of Taipei’s highlights in a weekend. Here are some of the best experiences, restaurants, and hotels to check out on a visit to Taipei.

Things To Do In Taipei

Lively night markets and a fascinating hot-spring culture are among Taipei’s claims to fame. Add in a distinctive skyline and majestic monuments, and you have the makings of a wonderful visit. Here are seven of the not-to-be-missed experiences in Taipei.

1. Take In The Pageantry At Chiang Kai-Shek Memorial

Located right in the heart of Taipei is the massive Chiang Kai-Shek Memorial, which pays tribute to Taiwan’s long-time former president, Chiang Kai-Shek. Fronted by two sets of stairs, each with 89 steps, the memorial is truly a sight to see. It is known as a landmark of Taipei and one of the city’s most popular tourist sites.

The memorial’s white marble walls, blue glass roof, and bordering garden of red flowers are said to reflect the blue, white, and red of Taiwan’s national flag. I recommend climbing the stairs and taking some time to gaze out onto the enormous Liberty Square spread out below.

Pro Tip: Try to time your visit to take in the elaborate changing-of-the-guard ceremony that takes place hourly throughout the day on the fourth floor of the main building.

If a stroll through fields of blooming calla lily sounds like an enjoyable break from the hustle and bustle of the city, be sure to head to the Yangmingshan National Park, located in Taipei’s northernmost district of Beitou.

There, along with the lushly green mountainsides, you’ll find places to take in fields of calla lilies. One popular spot is the Miau-Ban Calla Lily Garden, where water trickles from fountains in the midst of the delicate white flowers.

The 28,000-acre Yangmingshan Park is considered Taipei’s urban forest. It can be reached either by a short drive or by public transportation with a combination of the metro and buses. Instructions are available here.

Located just an hour or so northwest of Taipei, the historic little town of Jiufen makes a great day trip from Taipei. The town, with a gold-mining history that dates back to the 1890s, is known for its charming Old Street, which teems with unique snack-food booths and quirky shops.

Jiufen is also the perfect spot to experience Taiwan’s traditional tea culture. Delicious tea and lessons in the tea culture are available at the atmospheric Jioufen Teahouse, where you can also pick up distinctive ceramic artwork.

For an experience rich in spiritual and cultural history, visitors should make a point of stopping at one of the city’s beautiful Buddhist temples. The most famous is the Lungshan Temple in the Wanhua District. The Taiwan tourism bureau says the temple is not only a place of worship, but a tourist attraction and a historic site as well.

Another noteworthy historic site is the National Palace Museum, which is said to be among the world’s largest repositories of fine Chinese art treasures, spanning nearly 5,000 years of history. Other historic sites to check out include the National Museum of History and the Taipei Confucius Temple.

5. Relax In A Hot Spring

Taiwan is one of the world’s premier hot-spring locations, and visitors can experience the accompanying culture in the Taipei-area Xinbeitou district. Taiwan tourism recommends the area surrounding the Beitou Hot Springs park for both its natural features and its recreational amenities.

For a hot springs region that is located a bit farther out — about an hour from Taipei — the Jiaoxi area offers a fun and relaxing experience, complete with numerous hotels and resorts that feature the naturally hot spring water.

Taipei 101, the 1,667-foot-tall building that was the highest in the world from 2004 to 2010 (until it was surpassed by Burj Khalifa in Dubai), sits right in the midst of Taipei’s trendiest district, Xinyi. The distinctive, needle-like building can be seen all over Taipei, and it’s worth a visit to get a panoramic vantage point of the city

A speedy elevator will take visitors to an observation platform on the 89th floor, and the Taipei 101 Mall offers a range of designer shopping and high-end dining options.

For a one-of-a-kind shopping and eating experience, visitors to Taipei should not leave without taking in at least one or two of the numerous night markets in the city.

Each of the night markets has a snack-food specialty of its own — from herb-steamed spare ribs to shaved ice to Taiwanese fried chicken. The night markets are also known as great places to shop for trendy scarves, purses, and jewelry.

Taipei’s night markets are spread throughout the city’s numerous districts, and a list of the areas and markets is available here. Two of the most famous markets are the Shilin Night Market, located in the neighborhood of Dadong Road and specializing in hot pot on stone and Shilin sausage, and the Raohe Street Tourist Night Market in the Songshan District, which specializes in oyster vermicelli, pepper meat buns, duck meat, and stinky tofu.

Perhaps more than anything else, food is Taipei’s calling card for visitors. From the traditional comfort-food dish of beef and noodle to the superb seafood to the city’s signature soup dumplings, Taipei is a worthy foodie destination. Along with the food-centered night markets, the city has a virtually endless array of restaurants, and here are several of the best.

Din Tai Fung is a popular worldwide chain, but it got its start in Taipei, perfecting the soup dumplings known as Xian long bao. Today, it is possible to visit the original Din Tai Fung on Xinyi Road in the Da’an District. There, along with the signature dumplings, diners can feast on specialties like sweet and sour pork spare ribs or the light and refreshing Din Tai Fung House Special made up of bean sprouts, glass noodles, and thin strips of seaweed.

Beef noodle soup, Taiwan’s signature comfort food, is available all over Taipei, and lovers of hearty meat dishes should definitely make a point of checking out one or more of the places that specialize in the Taiwanese staple. Several that consistently make the lists for having the best beef noodle soup in the city are Yongkang Beef Noodle, Lin Dong Fang, and two locations (one in the Xinyi District, and one in the Da’an District) of Halal Chinese Beef Noodles.

Taipei has a range of sleek and modern hotels, many of which are affordably priced and conveniently located. The city is separated into districts, including the upscale Xinyi, the centrally located Zhongzheng, and the culinary center in Da’an. Experts suggest picking a hotel based on the district, as well as your interests. Here are a few of the best hotels.

My travel companions and I stayed in the Park Taipei Hotel and loved the modern design and convenient location, right next to the Da’an metro station. The hotel also was clean and reasonably priced, and the check-in was smooth.

For a luxurious stay in the higher price range, head to the W Taipei in the lively Xinyi District, known for shopping, nightclubs, and upscale restaurants. The hotel is strategically located close to the Taipei 101 skyscraper, and it bills itself as “the only hotel in Taipei that you can see the whole Taipei 101 building from your room.” The hip chain hotel also features a signature restaurant, trendy bars, and a pool, workout, and spa area.

If being in a central location is important to you, check out the Cosmos Hotel, conveniently located near the main station of the Taipei Metro. Cosmos is in the Zhongzheng District, the area that includes popular attractions like the Chiang Kai-Shek Memorial, the Taipei Botanical Garden, and the Nanjichang Night Market.

Pro Tip: Along with traditional hotels, dozens of vacation rentals are available through VRBO Taipei.

Much of Taiwan is considered subtropical, with areas of tropical climate in the south. Owing to that, visitors should expect high humidity throughout much of the year. The fall months of September to November are considered optimal, featuring relatively dry conditions and warm temperatures in the 70-to-80-degree Fahrenheit range. I visited in March, which was also pleasant, with temperatures in the 60s and misty skies. Summer months are known to be hot and humid, with average high temperatures topping 90 degrees. Winter is cool but comfortable, with average highs in the 60s.

Pro Tips: Taipei’s excellent Metro Taipei (MRT) offers swift and convenient public transportation all over the city. It pays to coordinate your hotel and restaurant choices with the locations of metro stations. Also, remember that the MRT takes seriously its ban on eating, drinking, and chewing gum.

Taipei is located near the northern end of the oval-shaped island of Taiwan. International flights typically arrive at the country’s largest airport, Taipei Taoyuan Airport (TPE). 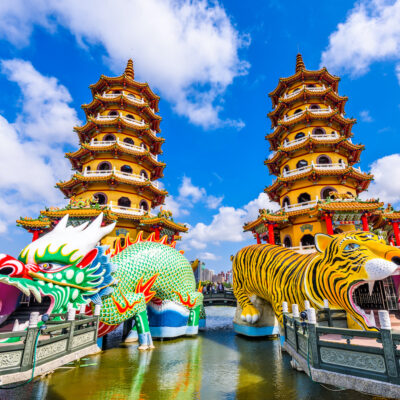 Taiwan9 Reasons To Fall In Love With Taiwan