14 Things Solo Travelers Should Know Before Going To Central America

My first trip to Central America started with Costa Rica in January, 2018. It was the first place I went after quitting my job, so, in many ways, it was a very adventurous journey. I had only six weeks for this first adventure and originally planned two weeks in Costa Rica, two in Peru, and two in Argentina. Thankfully, I changed my tune and spent six full weeks in Central America, leaving the other countries for another time.

Prior to Central America, all my solo travels had been mostly to Europe. Though I’m accustomed to traveling alone, I wasn’t sure what to expect. I had heard from others that Costa Rica was beautiful, and also that the roads are rough. It was a definite adventure!

Here are a few tips I learned from my time in Central America.

1. Notes About Getting There

If you’re arriving from outside Central America, you’ll definitely be flying in. The question will be which airport to choose. Costa Rica, for example, has two international airports, and you want to choose the one closer to the parts of it that you want to visit. The west and east coasts are completely different from one another. With the rough roads, it becomes more important to figure out which airport is more convenient to the locations you plan to go. Other countries may make your selection easier, with only one international airport.

2. Everything Is Casual, Including The Dress-Code

I remember being surprised at how few mirrors I found in my various accommodations. I often had no idea what I looked like when I stepped outside my door. I soon realized that people cared more about getting to know me than about what I was wearing. There’s no need to have matching or expensive clothes. Simply enjoy, relax, and be comfortable. For the most part, as I traveled through Central America, I didn’t even see designer brands or makeup anywhere. It was a complete relief.

3. The Wi-Fi Connection Is Unreliable

Most places I went had poor Wi-Fi and no 5G for sure! Smaller towns share all the bandwidth, so the more people there are in a town, the more you’ll feel like you’re on dial-up. If you’re a blogger or attempting to hold important meetings while traveling through Central America, you may have to stay in more luxurious properties or bigger cities or hunt down co-working spaces to get the access you need. I was unintentionally in Uvita, Costa Rica, right before the Envision Festival, and it was impossible to connect. I was told that was because the entire city had only 2Gig of bandwidth and, clearly, a lot of tourists were in town.

4. More On Getting Around

As a solo traveler, I don’t hitchhike, and for the most part, don’t drive alone. While in Central America, I went to Costa Rica, Panama, and Nicaragua. I preferred using shuttle companies, like Interbus and Caribe Shuttle, instead of local buses. (Apart from when I was in a city and going to another destination in the same city.) I felt there was less risk of theft, and the drivers were excellent. When I tried to reach more remote places not served by the popular shuttle companies, I found there were lesser-known ones that did. So, if you find yourself “stuck,” don’t despair. Ask a local or fellow traveler, and you’ll figure out how to get where you want to go.

5. Eat Local And Save Money

One of my favorite parts about Central America was finding great food at cheap prices. Even in Nicaragua, the town of San Juan del Sur, known to be touristy, less expensive options were available. One of the things I loved in Costa Rica was the Soda. They’re family-owned and operated restaurants. Each had its own take on popular dishes, and I enjoyed seeing how differently the same dish could taste. Breakfast is a combination of rice, beans, eggs, and bread, and lunch and dinner have so much food on the plate it’s impossible to finish. It tastes delicious, too! Cooked fresh, these meals may not help your waistline, but they’re friendly to the budget, and you won’t go hungry. I also found these were great places to meet locals and other travelers. Outside of Costa Rica, sticking to local food choices (as opposed to gourmet international) is a great way to save on eating out.

I’ve been to 25 countries in the past few years, and felt that Central America had the highest percentage of Jehovah’s Witnesses I’ve ever encountered. I can’t count how many times I thought I was talking to a person being friendly, and suddenly had a brochure thrust into my hand. I’m not sure if it’s because I was a solo traveler, but I got a lot of unwanted invitations to become a Jehovah’s Witness. Happily, they’re harmless. Just don’t be surprised when the seemingly nice people you’re talking to turn out to be on their 3-year mission to recruit people to the organization.

7. The Best Time Of Year To Go

There are rainy seasons to contend with, so it’s a good idea to use Google to research which months those are for whichever countries you plan to visit. That doesn’t need to deter you, but some countries can get flooding, resulting in poor or impossible driving conditions in heavy rainfall.

Adding on to the prior point about having someone else do the driving, roads aren’t always paved. Rainfall can be an issue, and that will be a problem when driving. Ironically, Costa Rica is one of the wealthiest countries in this region and has the worst roads. Locals told me that’s because Costa Rica exports the road-paving materials to places like Panama and Nicaragua, where you’ll find better conditions. If you do plan to rent a car, take road conditions seriously.

9. There Are Lots Of Stray Dogs

I found it difficult to see so many street dogs throughout Central America. They’re more like scavengers than affection-seekers. I bought a bag of biscuits to hand out to every dog I saw in Bocas del Toro, Panama. Most of them turned their noses up, knowing the leftovers they eat out of the garbage are tastier. Even emaciated dogs preferred the garbage to a biscuit handout. If you’re a dog lover, you may have a tough time seeing the condition of so many dogs. Happily, in Costa Rica, there’s a volunteer program to help them.

10. Spanish Is Optional, But A Good Idea

English is widely spoken throughout Central America, and there are many American expat and retiree communities. If English is your first or only language, you’ll be okay most of the time. However, if you want to get to some of the more remote villages or use local transport, you may find a lack of Spanish is a problem. If you plan to take a local bus or eat in remote cafes, you’ll be happy you speak some Spanish when you do. If you want to really get to know the locals and make friends, then Spanish is a must.

Let’s just say women are treated differently as you head south. If you can accept that men think you’re beautiful and are simply expressing a compliment, it may make you feel better. When I wondered off alone in Costa Rica, especially in Guanacaste, I was frequently asked by men why I was alone and where I stayed. I always replied that I was on the way to meet friends, and forgot the name of the place I was staying, but it could be unnerving. I generally don’t stay out alone, past dark, which, for me, is a core rule of thumb that is one of the things that has kept me safe.

12. You’ll Probably Get Sucked Into Zip-Lining At Least Once

When I first landed in Costa Rica, I was horrified to learn that people are stupid enough to hang from a small cable thousands of feet in the air and float down. I had never heard of ziplining before my trip there. The problem is, ziplining is everywhere. Worse yet, you’ll hear the howl of people sliding down, and they sound so fiercely alive that you’ll feel compelled to risk your life to feel what they appear to be feeling. I wrote an article about my experience you might enjoy.

13. There Are Huge Insects

This is by no means NOT a reason to stop your trip. However, be prepared. There are giant insects. I’m not sure if they’re locusts or crickets. They easily look a foot long. The real danger is, they suck at flying. This doesn’t stop them, though. So, while they try to land on your door, they may just land on your shoulder or graze your face. Happily, you won’t suffer anything more than fright. It’s just that being solo, you may wish you had someone’s hand to grab.

14. Some People Are Bad, But Most Are Wonderful

You may read about or see government warnings about drug trafficking, kidnapping, etc. In my experience, if you keep to the places that you’re told to, you won’t have a problem. There are drug checkpoints in places, so be prepared for police to potentially stop your vehicle and ask questions, especially if you’re crossing borders by road.

All in all, I loved Central America. I found it a blend of the Caribbean and South America. Lush scenery, rolling hills, beautiful people, and wonderful food. If you’re a solo traveler, you definitely need to keep alert, but that’s true any place in the world. 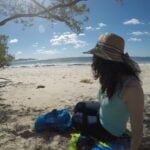