7 Of The Best Language Apps For Travelers

Vanessa Chiasson
TravelAwaits participates in affiliate programs with various companies. We may earn commission when you click on or make purchases via links.

I have struggled with speaking French for most of my life. While I aced all my quizzes in grade school, as a backpacker I was unprepared for the fact that French people do not go around using phrases like “The teacher asked the student for chalk” or “Jimmy saw the clock on the wall.” It was equally distressing to learn that these phrases didn’t exactly come in handy when I visited a cafe in Arras or need to make inquiries at a hostel in Menton. And all those hours writing out lists of conjugated verbs didn’t exactly have my back when I was asking railroad staff in Carcassonne “Is there a train for Paris?” instead of “Is this the train to Paris?” (Spoiler: I got on the train to Rome.)

Confidence shaken, I took class after class at the community center upon my return. My vocabulary would improve for a few months — only to plummet once again during the summer break. I convinced myself that I was just bad at languages and that it didn’t matter that much, really, in an inter-connected world where everyone carried smartphones.

But now I have COVID-19 to thank for my renewed efforts to learn French. When the global pandemic canceled my month-long stay in Paris, I decided I would add on an extra week for each subsequent year the trip was delayed. It’s now looking like I’ll be enjoying a six-week sojourn in 2022, and I figure it’s now or never to finally improve my language skills — and my confidence.

There are now language apps for every possible style of learning, and I tried to reflect that in this list. Whether you prefer lessons in five-minute bursts, enjoy the traditional structure of an in-depth lesson, or would rather listen than study, there’s a little something for everyone. Including me, I hope. Bonne chance!

With close to 40 languages (including Norwegian, Irish, Navajo, and Klingon) Duolingo offers short, game-like lessons that make learning feel more like a fun pastime. You get points for completing lessons, and you can decide how much time you want to dedicate to learning each day. This is the perfect choice for anyone who wants their language education to feel as far away from traditional school as possible. Users have the choice between starting as a beginner (which is great both for actual beginners and those students who want to build their confidence by reviewing the fundamentals) or taking a placement test (which would appeal to former students who hate going over material they already know). You can use the program on your phone or desktop for free (though you can upgrade to an ad-free version for a small fee).

If you have a slightly competitive streak, Memrise may just be the perfect language learning app. As you repeat keywords and phrases using both video and text, you earn points for things like accuracy and speed. You can be a part of the leaderboard if you want to check out how you’re measuring up compared to others who are practicing (virtually) right alongside you. This program also has a library of user-created courses (like the 500 most common French words), which helps the learning process feel more like real life and less like an academic exercise. Memrise currently offers just over two dozen languages, including Yoruba, Mongolian, Slovenian, and Swedish. This is a paid app, and you can sign up for monthly, annual, or lifetime plans.

If there’s one name on this list that’s instantly recognizable to even casual travelers, it’s Rosetta Stone. The old kid on the block when it comes to language instruction, this company has been around long before apps were an indispensable part of the travel experience. They offer tuition in 24 languages (including Vietnamese, Tagalog, Farsi, and Greek). Lessons start with ten-minute segments (which is more flexible than their previous model, which relied on 30-minute units) and the focus is on total immersion. Once you’re signed up, you won’t see any English on your screen — unless, of course, that’s the language you’re trying to learn. There’s an audio companion option, which is a nice way to take a break from screen-based lessons. And if you’re worried about pronunciation, you can receive instant feedback via their TruAccent technology.

This is a paid app, and you can sign up for monthly, annual, or lifetime plans. You can feel doubly good about your investment because Rosetta Stone runs a project to help protect and preserve endangered languages. You can learn more about their efforts here.

Babbel offers just a dozen or so languages (Dutch, Indonesian, Russian, and Danish among them) but this shortlist of offerings comes with some serious bragging rights. 73 percent of users can participate in a short, simple conversation after just five hours of lessons. Part of their success is no doubt due to experience. Babbel was the first language learning app on the market, and they have honed their approach to focus on real-life, relevant topics in international travel. Lessons take between 10 and 15 minutes each, and users learn by repeating phrases, filling in the blanks to make sure they grasp the vocabulary, matching up phrases, and using correct spelling. Sign-up terms are for one, three, six, or 12 months, and the longer you commit, the less it costs per month.

Drops is unlike any other language learning app on the market. Their focus is on lessons that last five minutes and only five minutes. Their theory is that this time period allows students to maintain an intense focus on their work and that anyone can commit to five minutes. The game-like approach (like dragging words to the corresponding photo) makes learning fun and stress free. Drop offers three dozen different languages, including Hawaiian, Maori, Thai, Finnish, and Hungarian. This free app has a paid version to eliminate ads and unlock longer lessons.

Ultimately, the most important thing about learning any language is being able to communicate, and HelloTalk strips thing down to what really matters: having conversations. HelloTalk connects millions of members so they can teach one another through text, voice recordings, video calls, and more. It’s interactive, it’s personal, and allows you to connect to the culture of your destination. Think of it as a language app that takes its influence from social media. This free app (which has in-app purchases) supports more than 100 languages.

If you need to learn Eastern Armenian or Western Armenian, Farsi Persian or Dari Persian, Pimsleur is the place to go. This app offers instruction in 50 languages, including Twi, Urdu, Ojibwe, Haitian Creole, Croatian, Albanian, and Lithuanian. The Pimsleur Method focuses on audio learning (which is perfect for people who aren’t visual learners), and students are asked to commit to 30 minutes a day. The content focuses on commonly used words. For instance, instead of learning to say “I speak Spanish”, you might learn how to say “I understand Spanish.” That way, you’re already well on the way to being able to say common phrases like “I understand the directions” or “I don’t understand the menu.” As such, students aren’t memorizing words so much as they’re learning how to use them in multiple contexts. If you’ve struggled with other language learning methods, this could be the app to turn things around for you once and for all. This paid program is based on a monthly subscription.

It’s Time For Me To Give French Another Chance

When I finally get to Paris again, I’ll be ready to experience everything and won’t hold myself back because of my language skills. I might not be perfect, but I know that there are more tools available than ever before to help me learn, and that in itself may just be the confidence booster I need to take things to the next level. 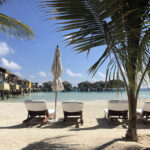 Travel Tips5 Mistakes To Avoid When Visiting An All-Inclusive Resort