How Taking These Virtual Tours Can Help Homeless People

As the travel industry reinvents itself during this worldwide pandemic, Paul has reinvented himself as a virtual tour guide. The 54-year-old is a formerly homeless guide with Invisible Cities, a social enterprise (non-profit organization) that supports homeless people by training them as tour guides.

Paul is more than knowledgeable: He’s an entertaining storyteller with a great instinct for making history both relevant and irreverent. His tour is a mash-up of anecdotes, folklore, culture, geology, current events, travel tips, and myth-debunking.

Virtual Tours Throughout The World

Pre-pandemic, Paul offered in-person walking tours to small groups. Now, he shares his home city with hundreds of “virtual tourists” from around the globe through the platform Virtualtrips.io, which offers dozens of live, interactive tours by professional and amateur guides from all over the globe. (Recently, I toured a casket-maker’s shop in Ghana and a farmer’s market in Ljubljana, a city I’m thinking of relocating to.) Although the trips are free, tips are encouraged.

Tours are 45 minutes, but guides often come on a few minutes early and stay late to continue the chats.

While virtual tours don’t replace actual in-person experiences, they are an opportunity to “travel” guilt-free: no carbon footprint, no straining local infrastructures, no dealing with mobility issues…and you can support local entrepreneurial guides.

Tours are live, never recorded, and participants are encouraged to ask questions or make comments through a chat feature that pops up on guides’ camera screens, allowing for real-time conversations between the virtual tourists and the guides. Paul was chatting directly with people, using their names, thanking them for their tips, and answering their specific questions.

Virtual Tour With Paul Through Edinburgh

We started Paul’s Edinburgh: The Good, the Bad and the Ugly tour at Edinburgh Castle, Europe’s most seized castle, before walking — or, really, sprinting — down the iconic Royal Mile. “It rains 191 days each year,” he says brightly, “but that’s okay. Today’s rain is tomorrow’s whisky.”

He pauses at St. Columba’s Church and reminds his live, 175-person worldwide audience that he’s experienced homelessness. “I’ve lost everything six or seven times,” the single father mentions, offering to answer any personal questions once the tour has ended.

As he trains his “gimbal” — a special 360-degree portable tripod attached to his smartphone — over St. Columba’s Church, he mentions that the organization that trained him, Invisible Cities, sponsors an annual “beauty day” for homeless women by providing haircuts, makeup, and clothing. “WOW! Amazing. That’s so good looking after the homeless,” one tourist writes in the chatbox that pops up on Paul’s screen.

Although Invisible Cities has also trained “rough sleepers” (Britain’s term for people who have experienced homelessness) to guide in Manchester, Glasgow, York, and Cardiff, Paul is the organization’s first virtual guide. He graduated in 2018 from the non-profit’s rigorous training program, studying everything from body language and confidence-building to dealing with difficult customers or street hecklers.

Invisible Cities helps their new guides with content ideas, storytelling skills, and guidelines on how much of their own personal stories to reveal. Research support is provided by the National Archives of Scotland, University of Edinburgh, the National Museum of Scotland, and Edinburgh World Heritage. Guides are encouraged to spark debate and conversation — and taught to never make up information.

They roleplay and walk the tour route, determining such things as where to safely cross streets. The final stage is taking out “focus groups” — who are usually staff people from local hotels — on practice tours.

The one-to-one training takes a minimum of ten weeks. Some trainees may never graduate to lead tours, but they instead help as “marshals” to escort tourists from their hotels to the tour starting point or to help keep the group together.

Some of the training is conducted by hospitality experts, such as representatives from Booking.com, explains Invisible Cities founder and CEO Zakia Moulaoui Guery. Once training is complete, the guides create and research their own tours. Besides Edinburgh: The Good, the Bad and the Ugly, Paul now conducts tours about Mary, Queen of Scots, Leith (the port area north of Edinburgh with its own rich history), the murky history of Edinburgh’s poor in the 1500s, the truths and myths behind Harry Potter, and Edinburgh’s New Town.

Operating from grants and private donations, Invisible Cities pays at least an hourly minimum wage and covers the cost of hats, T-shirts, and — in Paul’s case — his gimbal and camera.

Although Invisible Cities had conducted 5,000 pre-pandemic in-person tours in its five cities during its first two years, it will “for sure” keep the virtual tours going, says Guery. On the single tour I took with Paul during his first week, he had an international audience of 175 virtual tourists, exposing Invisible Cities’s work to thousands of potential supporters — some of whom might start their own Invisible Cities chapters in their own communities. Paul now has a “following” of people who repeatedly join his tours, as no two tours are alike.

The Inspiration For Dr. Jekyll

After pausing at the Royal Mile’s Scotch Whisky Experience (where visitors can partake in tastings from the world’s largest whisky collection) and Camera Obscura and World of Illusions (whose rooftop terrace offers visitors breathtaking 360-degree views of Edinburgh), Paul regales his tourists with tales of Scotland’s shameful history of burned witches and of master locksmith Deacon William Brodie — a renowned cabinetmaker and town councilor who copied his customers’ keys so he could break into their homes to fund his gambling, cockfighting, and two mistresses.

It is said that the double-life of Deacon Brodie inspired Edinburgh author Robert Louis Stevenson, who Paul reports drafted Strange Case of Dr. Jekyll and Mr. Hyde on a six-day cocaine binge (which might have actually been a six-week hallucinogenic ride caused by a common rye and wheat mold that was treating Stevenson’s tuberculosis-ridden lungs — a mold that also, incidentally, probably factored in the witch trials).

Pro Tip: Admission to the Camera Obscura and World of Illusions offers discounts at nearby restaurants.

The Prototype For The Emerald City

We zigzag down picturesque Victoria Street, where Paul pauses and steadies his camera so participants can shoot a “postcard” from their laptops or tablets. We pass a couple of stores selling Harry Potter memorabilia and head into the Grassmarket, which served as early Edinburgh’s hanging square. Paul points out The Last Drop Tavern, where the condemned were offered their final wee dram of whisky before execution.

At the bottom of Grassmarket Square, Paul points his camera skyward to get a dramatic view of Edinburgh Castle perched on its volcanic rock and explains that the Wicked Witch of the West’s castle was inspired by this castle, as one of The Wizard of Oz’s art directors, George Gibson, was from Edinburgh.

The Black Mausoleum Of Greyfriars

After passing the Grassmarket Community Project, which supports vulnerable people by teaching skills such as sewing charming Greyfriars Bobby dogs from tartan textiles (available online), we end the tour at Greyfriars Kirk, the cemetery that Mary, Queen of Scots, granted as a burial ground in 1562. This is also where, in 1632, the National Covenant was signed, which provided Scotland’s cornerstone to educational and religious freedom.

Paul recounts a harrowing story about George “Bluidy” Mackenzie who, during the 1700s, gleefully prosecuted 1,200 protestors who supported the new Covenant, condemning them to the world’s first open-air prison in a corner of the cemetery, where guards tortured and starved them; their severed heads often decorated the prison gate. Mackenzie — along with his executed charges — is buried in the Black Mausoleum. As a schoolboy, Paul and his friends would dare each other to bang on the ghoulish tomb’s rusty door to raise the cruel lawyer’s ghost.

Ever since someone disturbed Mackenzie’s remains in 1999, reports of poltergeist activity around the mausoleum have increased. Paul leaves his tour participants to make up their own minds about supernatural activity.

Pro Tip: Post-COVID-19, the cemetery and church (which is now a major art and concert center) will resume hosting free musical concerts every Thursday at noon. There are also daytime and, for the more intrepid, nighttime tours of the cemetery.

To research this article, I took Paul’s tour twice — once in person on a bitterly cold windy day, where I had trouble keeping up with the clipped pace he maintains to keep his virtual audience engaged, and a second time a few days later from the quilt-wrapped comfort of my fireside couch. The experiences are totally different. In person, I was able to put the landmarks in community, cultural, and contemporary context. Virtually, I focused entirely on Paul’s commentary and saw Edinburgh through his eyes. Either way, Paul’s tour is an Emerald City gem!

Pro Tip: Paul realizes his Scottish accent is a wee bit challenging at times and invites his virtual audience to remind him to slow down his “dulcet tones.” 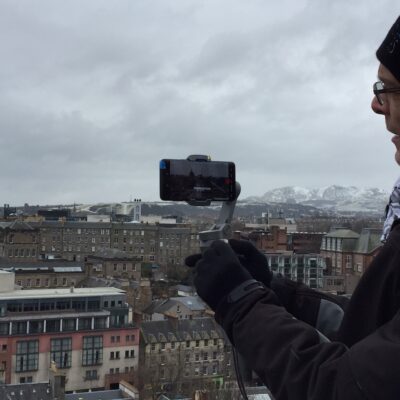 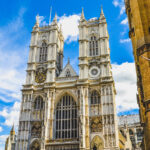 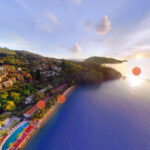 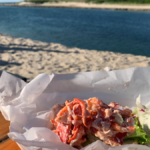