I’ve always been obsessed with the mystery of stars in the night sky, and years ago, I made it a tradition to eschew wild parties and big New Year’s Eve gatherings for a trip to a state or national park to ring in the New Year.

Every New Year’s Day, I strap on hiking boots and hit the trails for the first hike of the new year, but as the old year gives way to a fresh start at midnight, I prefer to watch the heavens above.

If you’re like me, you may live in a city that glows with millions of lights, causing light pollution that obscures the stars. Instead of seeing only half of what the night sky offers, why not head out to a state or national park to appreciate the universe’s own fireworks display of constellations, planets, and shooting stars?

Dark sky parks are becoming more popular, and the National Park Service offers wild areas that are protected from the effects of light pollution. In the United States, 27 national parks have been recognized by the International Dark-Sky Association as International Dark Sky Parks and Sanctuaries. This distinction recognizes lands possessing “an exceptional or distinguished quality of starry nights and a nocturnal environment that is specifically protected for its scientific, natural, educational, cultural heritage, and/or public enjoyment,” according to the International Dark-Sky Association.

So instead of downing that champagne in the middle of a loud, crowded party, grab a blanket and a picnic basket and go stargaze at one of these spectacular state and national dark sky parks.

Big Bend Ranch State Park and Big Bend National Park are both designated International Dark Sky Parks, and together they make up one of the largest contiguous areas of dark sky park in the country.

If you’re headed to Texas’s largest state park to take in the stars, the best places for stargazing are along River Road, at the West Contrabando Trailhead, at Big Hill, and at the Hoodoos. These spots can be easily accessed by any vehicle.

Pro Tip: Texas does charge entrance fees at its state parks, but a Texas State Parks Pass can be a great investment if you plan to spend a lot of time in the state. The pass allows for unlimited free entry to 89 Texas state parks, plus discounts on camping and equipment.

Grand Canyon National Park is one of the world’s most popular tourist destinations, but it’s making a name for itself as a provisional dark sky park. Grand Canyon Village used to be covered in bright lights that caused the skies to dim with light pollution, but the park is now focusing on installing dark sky-friendly lighting.

The canyon floor offers up the darkest skies of the park, but Desert View and Lipan Point are also good places to set up your telescope or hunt for falling stars.

Joshua Tree National Park straddles the higher Mojave Desert and lower Colorado Desert in California, and it is the last area of natural darkness within Southern California’s eastern boundary. While the western half of the park still suffers from light pollution from nearby metropolitan areas, the eastern wilderness area sparkles with the darkest night skies in the region. Head to the Cottonwood Campground or drive along Pinto Basin Road between Cholla Cactus Garden and Cottonwood, which the park says has the darkest skies.

4. Craters Of The Moon National Monument And Preserve, Idaho

Craters of the Moon National Monument and Preserve is an otherworldly landscape of lava flows, islands of cinder cones, and scraggly sagebrush. This alien world is a perfect place to take in the celestial sights, since it was named an International Dark Sky Park in 2017, and the park staff have replaced the old park lighting with night-sky friendly bulbs that focus light downward instead of into the sky. The Idaho Falls Astronomical Society hosts star parties every spring and fall, and the park itself hosts moonwalk hikes during the summer months.

Locals say the top of Inferno Cone is one of the best stargazing spots in the park, but be aware that you’ll have to hike up a short half-mile round-trip trail that has a 160-foot elevation gain in the dark in order to get there. But the stunning views of Craters of the Moon and its dark skies are well worth the effort.

Newport State Park is Wisconsin’s only wilderness state park and was named the state’s first International Dark Sky Park in 2017. The park is located in Door County along 11 miles of Lake Michigan.

While the entire park has dark skies galore, the end of Europe Bay Road and the meadow at Monarch Trail near Lot One are the most popular spots to set up a telescope or lay out a blanket. The Newport Wilderness Society has a great map of the popular and easy spots for stargazing as well as a handy brochure to help you navigate the darkness.

One of the darkest areas east of the Mississippi, Cherry Springs State Park became an International Dark Sky Park in 2008. It even has an area called Astronomy Field, and the skies are so dark that the Milky Way is bright enough to cast shadows on the ground.

This 82-acre state park is surrounded by the 262,000-acre Susquehannock State Forest and is one of the most popular spots for night-sky enthusiasts on the East Coast. Though the park is open every day of the year, the Night Sky Public Viewing Area is only for short-term stargazing, and no overnight stays are allowed. The Overnight Astronomy Observation Field, however, is open to registered users all night.

Pro Tip: If you’re spending a lot of time at Cherry Springs to catch a glimpse of the Milky Way, you might consider buying a Galaxy Pass. This pass allows year-round access to the Overnight Astronomy Observation Field and is available through the Lyman Run State Park office after January 1.

In 2016, Kissimmee Prairie Preserve State Park was recognized as Florida’s first dark sky park by the International Dark-Sky Association, and in addition to stargazing, it’s also a great spot for watching rocket launches from the space centers on the East Coast.

Part of the Everglades Headwaters, the Kissimmee Prairie Preserve offers five astronomy pad rentals. After dark, all lights must be red spectrum, and no campfires are allowed on these sites.

You’ll have to reserve a spot if you want to view the night sky, because the park entrance closes daily 15 minutes after sunset, and only registered campers and after-hours passholders are allowed in after dark.

Utah is home to 15 dark sky parks, and Bryce Canyon National Park is one of the best in the state to learn about the universe. In addition to its weird and ghostly canyonlands, the park offers free educational stargazing programs at its visitor center. Led by the park’s astronomy rangers, these programs complement the telescope tours at their observatory outside the western boundary of Bryce Canyon National Park.

During the spring, summer, and fall, the park hosts roughly 100 astronomy programs per year. Each summer, the park holds an Astronomy Festival as well.

Though the stargazing activities slow down during the winter, the park offers new moon night hikes every month; these guided hikes show off the spooky shadows on the hoodoos. You can also book a Dark Ranger Telescope Tour to peer at constellations through giant telescopes and take a laser-guided night sky tour. 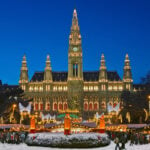