Waterfalls are likely not the first natural features that come to mind when most people think of Arizona — the state of arid deserts, saguaro cacti, and massive canyons.

Unless it’s Havasupai Falls, of course. The waterfalls deep in the Grand Canyon’s western reaches are famous worldwide for their luminous aquamarine water. Droves of adventurous hikers make the trek to the extraordinarily photogenic northern Arizona treasure every year. Certainly, the falls of Havasupai are hard to beat, and if you’re able, they are a not-to-be-missed bucket list destination in the Grand Canyon State.

But that doesn’t mean they are the only waterfalls worth checking out in Arizona. From spring-fed beauties that run year-around to seasonal wonders that gush only during wet times, waterfalls are the hidden gems of Arizona’s network of rivers and canyons.

For the most part, you will have to work a bit to take in the state’s waterfalls — either in long drives over dirt roads, or on hikes that range from easy to strenuous. But consider the payoff: the roar of rushing water in an otherwise barren landscape.

Here are seven beautiful Arizona waterfalls worth checking out.

Located near the town of Camp Verde in central Arizona, Fossil Creek is known for its sparkling water that seems to appear out of nowhere, gushing at 20,000 gallons a minute from a series of springs at the bottom of a 1,600-foot-deep canyon.

The 72-degree water is laden with calcium, which has created beautiful travertine formations, along with the fossils for which the area is named. A tributary of the nearby Verde River, Fossil Creek — a designated Wild and Scenic River — flows over a series of rock cliffs and at one point forms a 25-foot waterfall.

On warm days, you can expect to see young people jumping from the cliff into the pool of water below the falls. It can feel like a party scene at times, but for me, the sheer beauty more than makes up for the crowds.

Because of its growing popularity, the Coconino National Forest requires permits from April 1 to October 1. Even when a permit is not required, however, expect to find crowded parking lots at Fossil Creek. It pays to head out early to secure a space.

Fossil Creek is very remote. After driving through the Interstate 17 town of Camp Verde on the paved Highway 260, you will head off on Forest Road 708 and then travel 14 miles down into a canyon over a rough and rocky dirt road. The Forest Service suggests high clearance vehicles for the trip. Along with the rough surface, you will also encounter steep drop-offs along the way.

Once you get to the parking area, the hike to the waterfall is a fairly easy one-mile trail with some sections that are fairly rough and rocky.

While the falls at Havasupai are the stars of the western portion of the Grand Canyon, the North Rim area of Grand Canyon National Park has waterfalls of its own, thanks to the flow of canyon creeks.

Ribbon Falls is the loveliest, featuring a stream of water that cascades over a mossy rock wall that is more than 100 feet high. The falls are known as a spot where weary and hot hikers can take a break and cool off in the misty flow of water.

Getting there is a monumental trek, however, and should be attempted only by fit and experienced hikers who have a plan in place. The falls are located along the famous Rim-to-Rim hike that totals 21 miles or 24 miles, depending on your route.

Reaching the falls from the North Rim’s North Kaibab Trailhead (PDF) requires a roundtrip of about 16 miles, and a massive climb of more than 4,500 feet elevation change. From the South Rim, Ribbon Falls requires a one-way hike of about 13 miles, and a round trip should not be attempted in a day trip. Both routes are rated as extremely strenuous and should not be attempted in the heat of the summer.

For backpackers, camping is available, with a permit, at the Bright Angel Campground near Phantom Ranch, or the Cottonwood Campground along the North Kaibab Trail.

My advice is if you are prepared and have planned for the arduous Rim-to-Rim hike, it would be a shame not to make the 20-to-30-minute side trip off of the North Kaibab Trail to Ribbon Falls. The payoff is pure magic.

Pro Tip: The best times to hike into the Grand Canyon are spring and fall. Throughout the summer, average high temperatures at the bottom of the canyon exceed 100 degrees. The North Rim largely closes down for the winter, and its full season runs from May 15 through October 15.

During snowmelt in the spring, or during monsoon rains in the late summer, Grand Falls in the Navajo Nation puts on a show that regularly attracts thousands of spectators.

The phenomenon is seasonal, so be sure to check the status ahead of time. But if the falls are running, they are definitely worth the trip. At 185 feet high, Grand Falls exceeds Niagara Falls’ 167-foot height. During the wet season, a churning flow of muddy, chocolate-hued water rushes over the rock wall, creating a phenomenon unlike any other.

The trip to Grand Falls includes a drive over remote Navajo Nation roads, as well as about 10 miles over a somewhat rough dirt road. The falls overlook is just a short walk from the parking area, but handicap access is limited. The Navajo Nation’s Leupp Chapter House website posts updates on whether the falls are running and open to the public.

Note that because of the COVID-19 pandemic, attractions in the Navajo Nation, including Grand Falls, are temporarily closed.

For an easy trek to a creek spilling down a stone embankment into a picturesque little swimming hole, head to the Water Wheel Falls near the northern Arizona town of Payson.

Water Wheel Falls is a popular destination for families, especially during hot summer weather. It is located off Houston Mesa Road along Ellison Creek, near its intersection with the East Verde River. To avoid the crowds, arrive early or plan your trip for mid-week. Late spring, early summer, and fall are the best times to visit. The trail is about 1.5 miles and is rated as easy.

Note that the area can be prone to flash floods during the summer monsoons, so be sure to check weather forecasts in advance.

Boasting not just one waterfall, but seven on a single site, Seven Falls is among the most popular trails in the Tucson area.

Located in the spectacular Sabino Canyon in the Santa Catalina Mountains, Seven Falls combines rugged Sonoran Desert terrain with the sweet sound of running water — all within a half-hour or so from downtown Tucson, Arizona’s second-largest city.

The hike, which starts on the Bear Canyon Trail, is about 8.2 miles round-trip and is rated as moderate. You will have the best chance of seeing water in the falls by going in the late winter or early spring (February or March), when the snow is melting at higher elevations. It is best to avoid the trail in the summer, when average high temperatures hover at the 100-degree mark.

Pro Tip: Hikers can cut the distance of the hike down to about 4.6 miles by taking the Bear Canyon Trail tram to Seven Falls trailhead.

It is fleeting, but Wolf Creek Falls near the northern Arizona town of Prescott typically appears in the spring, just as the snow is melting in the nearby Bradshaw Mountains.

Sitting amidst the Prescott National Forest’s ponderosa pines, the falls features water gushing down a narrow granite gorge near the creek’s confluence with the Hassayampa River.

The easy-to-moderate Wolf Creek Loop Trail (number 384) winds through the forest before reaching a series of small waterfalls and pretty pools, and ultimately, the large rock chute.

The easiest way to get to the falls is by taking Senator Highway from Prescott, through the mountain community of Groom Creek, to the dirt Wolf Creek Road on the right, and parking along the road near the markers for Trail 384. The 1.8-mile round-trip hike can be extended to about 6 miles by doing a loop. Expect some boulder hopping along the way.

Pro Tip: The best times to catch water in the falls are March, during the snowmelt, and August during the monsoon rains.

Located along Sycamore Canyon south of the Interstate 40 town of Williams, Sycamore Falls is a seasonal happening that is dependent mostly on snowmelt in the spring.

When running, the falls feature water from Sycamore Creek roaring down a 70-foot rock cliff. Although the massive rock cliff is typically dry much of the year, it is still a spectacular sight to see.

The waterfall is located along the 12-mile Sycamore Rim Trail, which can be accessed at five trailheads along the way. The easiest way to get to the falls is by parking in the lot designated as Sycamore Falls and taking the steep flight of stairs down to the canyon. From there, the waterfall is just a short walk ahead.

Reaching Sycamore Canyon requires a 13.5-mile drive south of Interstate 40, much of it over gravel roads. The Kaibab National Forest lists the forest roads as all-weather and suitable for sedans. 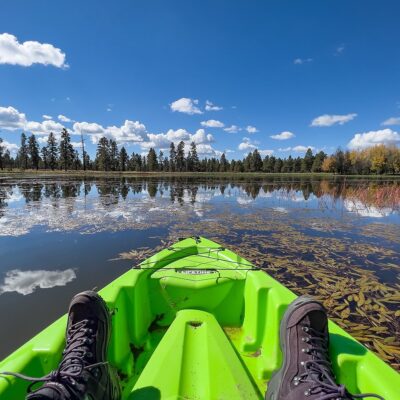