Everything You Need To Know Before Visiting Beautiful Edinburgh Castle

Edinburgh, the capital of Scotland, has always been an important seat of power and a place worth defending. Castle Rock, the high dome that was once upon a time a volcano, was the perfect place to put the city’s defenses. The people of the Iron Age were the first to recognize this when they built a fort here. The castle that stands atop the rock today was constructed sometime around the early 12th century. It was then fought over many times, mostly by the Scottish and the English, who knew that whoever held the castle held the city and could potentially control the whole of Scotland.

Today, the castle is purely a tourist attraction, and an incredible one at that. Before you go, here’s everything you need to know about visiting beautiful Edinburgh Castle.

Where Is Edinburgh Castle?

Edinburgh Castle sits right atop Castle Rock, and wherever you stand in the city, you can see the castle proudly overseeing the streets and the people. Edinburgh is built on seven hills, and the hill that takes you up to the castle, Castlehill, is the most arduous to walk, but also the most rewarding. Edinburgh Castle is located in the center of the city, so wherever you are in town, you won’t be far from it. If you’re approaching the city center from fashionable Leith, the castle stands at the top of the Royal Mile and is to the west of Edinburgh’s Old Town.

How To Get To Edinburgh Castle

Edinburgh Airport is close to the city and easily accessible by tram. The tram was a bone of contention for locals when its rails were laid, since it only goes to the airport and back and doesn’t serve any residential areas. However, it does make it easy to get to the city if you are traveling by air. You can also get to the city center from the airport by bus on the Airlink 100 Express, and some buses do stop directly outside the castle.

If you’re driving to Edinburgh, be aware that there is no parking at the castle itself. There are some on-street parking zones nearby, or you could opt to park in a multistory lot.

Traveling to Edinburgh by train is a dream, and Waverley Station is delightful. If you’re taking the train, the castle is just a short walk away, but be prepared for an uphill trek!

Edinburgh Castle is the most popular tourist attraction in all of Scotland, so you should be prepared to wait in line whenever you visit. Some times of the year are busier than others, though, and the summer months are certainly more crowded than the colder times of year. (Although, since this is Edinburgh, you should be prepared for rapidly changing weather whenever you visit!)

The first time I visited the castle was in September, and I had to stand in line in the rain for about half an hour. A month earlier, the weather might have been a little better, but that wait would likely have been closer to an hour. A month later, in October, I would have had a much calmer experience with fewer people visiting, but also some pretty bracing winter weather.

Edinburgh gets very busy again around the holidays, so December will also see queues and crowds of tourists. Perhaps the best time to visit is in the early spring, before the tourist season gets going and just as the weather starts to improve.

What Will You See Inside Edinburgh Castle?

A guided tour is included in the price of your ticket, so you can join a group and have a guide take you around the highlights and explain the significance of each. Alternatively, you can take your time and go where you please when you please. You can buy an audio guide for a small fee upon your arrival. The castle is very old and there are many steps to climb; however, there has been an impressive effort made to ensure those with mobility issues can still enjoy a tour, and most areas do have ramp access.

If you were thinking the crown jewels would be a highlight best saved till last, you’d be right about them being a highlight, but you’d be wise not to save them for last. As I already mentioned, Edinburgh Castle gets quite crowded over the course of the day, and the crown jewels are often saved for last on organized and guided tours. If you head there first, you can be sure of seeing the crown and scepter, known as the Honours of Scotland, even if you do have to wait in line a little.

Designed to be used as a banqueting hall and for state events, the Great Hall was the brainchild of King James IV, though he barely used it himself. The hall was completed in 1511, and James was killed in battle in 1513. The hall was later used as an army barracks and as a military hospital before being restored to its former glory. Much of its military past is displayed on the walls and around the room in the form of weapons and armor.

The National War Museum opened in 1933 in a building that was once the castle’s storehouse and was later used as a military hospital. The displays include military artifacts and wartime paintings, plus letters from soldiers abroad that make for some heartfelt reading. The collection also takes you further back in time and includes some incredible Highland broadswords.

Like much of Edinburgh Castle, Saint Margaret’s Chapel has been on something of a journey. This intimate chapel was built in 1130 by King David I for his mother, Margaret. Queen Margaret was canonized by the Catholic Church in 1250 for her many acts of charity. The chapel was later used as a storehouse for gunpowder, and it seems that people forgot it had ever been a chapel at all — until Sir Daniel Wilson rediscovered it in 1845.

This is a simple and beautiful little chapel that you can spend some quiet time in. This is one of the areas of the castle that doesn’t get crowded — so, as was intended, you get a slice of peace in this place.

The Royal Palace was the luxurious home of the Scottish royal family, and many of the royals were born and/or died inside the palace walls. The most popular room in the palace is King James VI’s birth chamber. It’s said that the birth was so difficult for Mary, Queen of Scots, that an attendant tried to use magic so that a servant could take on the pains for her. This room has important historic significance, since it was the birthplace of the first king of a united Britain and the first king of the United Kingdom.

The Prisoner Of War Vaults

Below Crown Square are the dark and dingy vaults where prisoners of war were once held. In the 1700s and 1800s, these vaults were used to house hundreds of prisoners, all of whom were squished together in terribly cramped and filthy conditions. There is evidence of how some of these prisoners tried to escape this awful place, in the form of holes made in the defenses. Many of the prisoners were sailors — some pirates — and an early version of the Stars and Stripes scratched into a door tells us some were Americans who fought in the Revolutionary War. The vaults have been recreated to look as they did for the prisoners long ago.

After you’ve seen all the attractions, be sure to take a little time to enjoy the views. Some of the rooms within the castle — especially as you make your way around to the crown jewels — will be filled with people, and you may have to be patient when trying to see the displays. Once you’re outside again, appreciate the incredible views over the city from the ramparts of the castle. Breathe in the fresh air, the incredible scenery, and the awesomeness of this old castle. There are some fascinating displays inside the castle, but outside, the views are just as impressive.

Book your tickets in advance online, and you can beat the crowds. You’ll get a designated time slot, and all you’ll have to do is arrive at that time and show your tickets, and in you’ll go, while everyone else will have to wait. If you haven’t bought tickets in advance but still want to visit, get there early. The castle opens at 9:30 a.m., and if you arrive at 9 a.m., you can get to the front of the line.

For more to see and do in beautiful and historic Edinburgh, see this page. 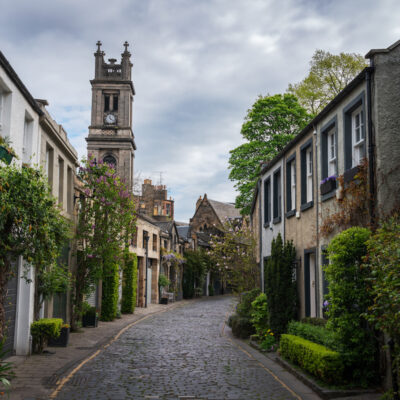 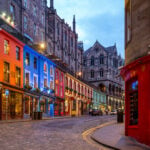 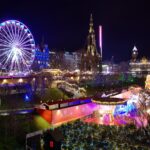