Incredible Ways To Experience Africa’s Victoria Falls, Plus Where To Stay

The Zambezi River forms the border between Zambia and Zimbabwe. Starting as a tiny bubbling spring in far northwestern Zambia, the river flows through flood plains, swamps, and rapids. About 745 miles into its journey, the river grows to a great water course, almost 1.5 miles wide.

It is here that the Zambezi reaches Victoria Falls, a UNESCO World Heritage site, one of the Seven Natural Wonders of the World, and the greatest curtain of falling water on the planet. Twice as wide and twice as deep as Niagara Falls, Victoria Falls spans the width of the Zambezi River, where it crashes over a sheer precipice, plummeting 355 feet into the gorge below. In the height of the rainy season, 287,476 gallons of water per second surge over the edge, and tall columns of spray can be seen from miles away, giving rise to the traditional Zambian name, Mosi-oa-Tunya, or “the smoke that thunders.” The sheer scale and power of the falls never cease to awe and astound.

The Zambian and Zimbabwean sides offer very different views of the falls, so if you have time, it’s worth visiting both sides to fully appreciate the natural wonder.

Aside from the lure of the falls themselves, there are numerous activities to keep even the most ardent adventure seeker busy.

Things To Do On The Zambian Side Of The Falls

Spend a day rafting down what is probably the wildest commercial whitewater in the world. A rafting adventure on the Zambezi River provides an adrenaline rush that’s not to be missed. Downstream from Victoria Falls, the Zambezi River boasts miles of deep, zigzagging channels, and the incredible volume of water guarantees an exhilarating day of whitewater rafting.

Your day will start with a hike down to the Boiling Pot, a massive whirlpool at the base of the falls, where you will clamber aboard your raft and set off. Although stretches of the route are designated high-octane Class V rapids, there are several areas of scenic, calm water where you’ll get the chance to swim alongside the raft for a bit. Good fitness levels are essential for this activity.

A visit to Victoria Falls would not be complete without a river cruise, preferably at sunset, and The African Queen is a wonderful one. You’ll travel at a stately speed up the Zambezi River above the falls, catching glimpses of hippos and crocodiles while being plied with cold drinks and tasty snacks by your ever-attentive waiter.

If flying over the falls in something resembling a couple of garden chairs attached to a beach umbrella with a lawnmower engine for propulsion is your cup of tea, then microlighting is definitely for you! While a microlight may look as fragile as a dragonfly, it is far stronger than it appears, and in the hands of a passionate and experienced pilot, it is one of the most breathtaking ways to see Victoria Falls. This is an activity for the adventurous.

If microlighting sounds a little too adventurous for you, then you can always opt for a spectacular helicopter flight, a definite bucket-list activity. The views are breathtaking and will give you a new perspective of the landscape below. You’ll have a bird’s-eye view of elephants crossing the river and pods of hippos lazily floating in the water below, and, as you fly over the Mosi-oa-Tunya National Park, you’ll look directly down on its wildlife.

If you prefer a moderate dose of adventure, sign up for a privately guided canoeing safari on the Zambezi, upstream from the falls. Paddling between the Mosi-oa-Tunya National Park on the Zambian side and the Zambezi National Park on the Zimbabwean side, you’ll glide past elephants, pods of hippos, and plenty of birds. As you head downstream, going with the flow of the river, you won’t even need to paddle much!

Dinner On A Steam Train

A ride on the Royal Livingstone Express is an incredible experience and a trip back in time to the luxury and grandeur of the era of steam trains. A red-carpet welcome awaits as you mount the stairs to the train. Wandering through the beautifully restored carriages, you’ll start the journey in the elegant lounge car. As the train sets off, you’ll nibble on smoked salmon canapes and enjoy a fascinating, humorous, and informative talk about the history of the train, the bridge, Livingstone, and Zambia in general. The train makes its way to the Victoria Falls Bridge, where you’ll disembark to view the falls, and those who are interested can visit the driver in his compartment. Boarding the train again, you’ll move into the dining car for a delicious five-course dinner as the train gathers speed and heads off into the night.

Bungee jumping off the Victoria Falls Bridge provides the ultimate adrenaline rush. At 360 feet, it is the highest commercial bridge jump in the world, and the setting is spectacular. Even if you are not brave enough to make the jump yourself, it is worth stopping to watch those who are!

Take a behind-the-scenes look at the famous Victoria Falls Bridge on a guided tour. While he never visited the falls and died before construction began, Cecil Rhodes (the instigator of the Cape to Cairo Railway Project) was presented with plans for a Zambezi River crossing, drew a line across the Boiling Pot (the point directly below the falls), and declared that that was where he wanted a bridge. Rhodes envisaged the spray from the falls landing on the trains as they crossed the bridge, and for many years after the bridge’s completion, trains would stop for a few minutes in the center of the bridge so that his dream could be realized.

On the guided bridge tour, you’ll be attached to the bridge by a series of cables and will walk beneath it with your guide on the original catwalk while learning about its construction and history. This is not a strenuous activity, but it is not advised if you are nervous about heights.

Chobe National Park has some of the greatest wildlife of any African park. The park is best known for its elephants, numbering around 120,000. On this unforgettable day trip, you will enjoy a 3-hour boat cruise through the park, lunch at a riverside restaurant, and then a 3-hour game drive inside the park.

Places To Stay On The Zambian Side Of The Falls

The minute you arrive at the Thorntree River Lodge, you’ll know you are in for a treat. The luxury river lodge has perfectly appointed rooms right on the banks of the Zambezi. Sundowners beside your private swimming pool and waking up in the morning to drink tea in bed, all with the river stretching out before you… this is all part of the Thorntree experience. The lodge is located in the Mosi-oa-Tunya National Park, home to buffalo, zebras, giraffes, elephants, warthogs, endangered white rhinos, and much more.

The Royal Chundu is located 37 miles from Livingstone and is a taste of paradise. The main lodge is right on the banks of the Zambezi, and there is an even more exclusive island lodge just a short boat ride away. Luxurious rooms complete with veranda bathtubs make relaxation easy. During your stay, you will be treated to the lodge’s special tasting menu, which features traditional Zambian ingredients. This could include the chef’s ingenious take on chibwantu (a traditional beer) served in a giant snail shell or the imaginative use of such ingredients as wild spinach and vinkubala (caterpillars). It’s a really novel way to immerse yourself in the local culture.

A stay at the Royal Livingstone Hotel wouldn’t be complete without sampling their extravagant high tea, featuring a three-tier cake stand loaded with goodies, your choice of any number of tea varieties, and some sparkling wine. The Royal Livingstone also offers a delicious champagne breakfast with all the trimmings on the banks of the Zambezi. The falls are only a short walk from the hotel.

Things To Do On The Zimbabwean Side Of The Falls

Lunch at the funky Zambezi House, constructed from old shipping containers and located on the banks of the Zambezi, is a must. The quirky retro decor, great vibe, riverside location, and delicious food are fantastic. The Zambezi House also offers evening entertainment with music and live comedy nights.

Built by the British in 1904 and one of the oldest hotels in Africa, the Victoria Falls Hotel originally served as an accommodation for workers on the Cape to Cairo Railway Project. Today, it’s a luxury hotel. Even if you’re not staying here, you should make time for high tea on the veranda of the hotel, with its dramatic views down the gorge to Victoria Falls and the famous bridge.

A sunset cruise on the Ra-Ikane, named for one of the guides who led David Livingstone to the falls, is a great experience. The small luxury cruise boat carries only 16 people and is outfitted with period decor, so you’ll really get the feeling of a bygone era. Traveling upstream as the sun sets, you’ll see a great variety of wildlife in a peaceful setting.

Places To Stay On The Zimbabwean Side Of The Falls

Accessible only by boat, Chundu Island is a tiny teardrop-shaped island in the Zambezi River, 13 miles upstream from Victoria Falls in Zambezi National Park. To reach the island, you must drive through the national park — home to elephants, lions, buffalo, leopards, and more — before taking a short boat ride across to the island. The lodge has a fun atmosphere, great food, and a really special setting. It’s perfectly located for game viewing, boat trips, fishing, and canoeing.

Ilala Lodge in the town of Victoria Falls is just a stone’s throw from the falls themselves — so close, in fact, that from most rooms, you can see the spray from the falls without having to leave your bed! Aside from the proximity to the falls, there are two other definite highlights of a stay at Ilala. The first is the wildlife roaming about the hotel grounds, including mongooses, hippos, warthogs, baboons, and monkeys. The second is the hotel’s restaurant, where you’ll be spoiled for choice with exotic items like warthog, crocodile, kudu, and ostrich.

The Victoria Falls Safari Suites are located away from the hustle and bustle, yet still close to the falls. The focus of the lodge is definitely on wildlife, with animals roaming about the grounds and visible from the rooms. Guests can even witness the daily feeding of the local vultures. The lodge’s own restaurant overlooks a watering hole, providing an ideal vantage point from which to watch the wildlife while you eat.

Tourists from more than 65 countries (including the United States) can obtain a KAZA UNIVISA, which is valid for 30 days and allows you to cross between Zambia and Zimbabwe so that you can visit both sides of the falls. The visa also allows for day trips to Botswana, provided you return to Zambia or Zimbabwe on the same day.

Peak flow is from March through May, after the rainy season has ended. The spray can be so dense that it quite literally rains down on you, so bring a raincoat and be prepared to get drenched! Medium to high flow is from January through February and June through August, and this is one of the best times of year to view Victoria Falls. Low flow is from September through December and is a good time to photograph the falls with much of the cliff face exposed. During this time, you’ll find less spray and fewer visitors. 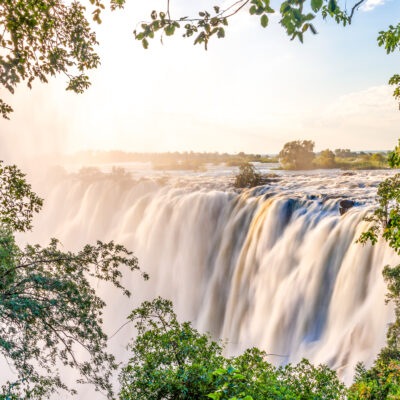