From ‘The Queen’ To ‘Harry Potter’: 5 Film Locations To Visit In Hertfordshire

Hertfordshire, a county just north of London, is home to two major film studios, Elstree and Warner Bros. And since the county is full of quaint villages, historic homes, and grand estates, their location scouts don’t have to travel far for fantastic settings. Neither do you.

Some of the best films to emerge from Britain — The Queen, the Harry Potter series, and Pride and Prejudice — were filmed in this creative area.

A stay in Hertfordshire offers a chance to visit famous film locations and a pleasant area outside London’s busy metropolis. Here are some film locations to make time for during your visit.

Just 22 miles from central London, Brocket Hall is a stately residence that was built in 1760. It was home to Prime Ministers Lord Melbourne and Lord Palmerston, and the young Queen Victoria also stayed here. Today, the lavish estate features 30 bedrooms, an upscale restaurant in a former hunting lodge, private golf courses, and lawns where guests can land their helicopters — as long as they ask first!

The famous wet shirt scene from the Pride and Prejudice miniseries (1995) was filmed in Lyme Park, Cheshire, but the Netherfield Ball was filmed in Brocket Hall’s ballroom. The hand-painted ceilings and impressive chandeliers were the perfect setting for Mr. Darcy and Elizabeth Bennett’s first dance and verbal sparring.

Brocket Hall also appears in the biopic The Queen (2006), where Helen Mirren plays Her Majesty, Queen Elizabeth II, navigating public disapproval for her perceived lack of emotion at Princess Diana’s death in 1997. Brocket Hall’s Lady Melbourne suite stands in for the Queen’s bedroom in the scene in which she awakens to the news that Tony Blair has won the 1997 election.

Brocket Hall is popular for society weddings and is an elegant place to stay. The Melbourne Lodge, a converted 18th-century coach house on the property, features rooms from $250+ per night. Other accommodation packages include the Auberge Experience, including an eight-course dinner and wine, for $884 per couple. Day memberships to the golf course are available. Brocket Hall also offers afternoon teas in the ballroom for $72+.

Pro Tip: One of the things I love about England is that even regal private estates often have a public right of way. If you wish to see Brocket Hall, there’s a public path running east from Marford Road, almost opposite The Crooked Chimney.

A train from London will whisk you to the town of Hatfield in 20 minutes; the town is home to an estate with two royally connected houses.

The Royal Palace of Hatfield, constructed in 1485, is where King Henry VIII kept his children outside London. Anne Boleyn would visit her baby daughter, the future Queen Elizabeth I, here — at least before Henry had Anne beheaded when Elizabeth was only two. Only a part of this structure still exists.

Hatfield House is the 400-year-old Jacobean structure on the same property. Today, it’s the home of Robert Gascoyne-Cecil, 7th Marquess of Salisbury. Given the estate’s royal pedigree, it has featured in several productions about royalty, including Elizabeth: The Golden Age (2007), The King’s Speech (2010), and The Crown (2016-present).

Actress Olivia Colman (who played Queen Elizabeth II in later seasons of The Crown) returned to Hatfield House to play the gout-ridden Queen Anne in The Favourite (2018). Her Oscar-winning performance was almost entirely filmed at Hatfield House. The lavish King James Drawing Room doubled as Anne’s bunny-filled bedroom, the black-and-white floor of the Marble Hall is where those ludicrous dances took place, and the Long Gallery, where ladies once took their exercise during inclement weather, saw Queen Anne squealing with delight as Lady Sarah (Rachel Weisz) ran pushing her along in a wheelchair.

Hatfield House is a popular tourist attraction open between April and September. The Marble Hall is home to the famous Elizabeth I Rainbow Portrait. There are 40 acres of gardens and parks to enjoy. Sit under an oak in the spot where Queen Elizabeth I first heard of her accession to the throne on November 17, 1558. She was 25. There are also 5 miles of woodland trails and a deer park. You’ll almost expect a stag to come bounding out at any moment, pursued by a monarch.

Once home to Edward Bulwer-Lytton — the Victorian writer and politician responsible for the line “It was a dark and stormy night” — Knebworth House is adorned with gargoyles and crowned with turrets and domes. No wonder it’s been such a huge hit with filmmakers. The exterior featured as Wayne Manor in Batman (1989), and in The Crown, Knebworth’s grand entrance stood in for Balmoral. In one notable scene, Prince Philip and Princess Margaret have a private conversation in the entry hall while the staff stand like statues, pretending not to hear. Knebworth House also featured in Victoria & Abdul (2017) and The King’s Speech.

The grounds are often used for concerts and have hosted performers like Robbie Williams, The Rolling Stones, Led Zeppelin, Pink Floyd, Queen, Paul McCartney, The Beach Boys, Deep Purple, Eric Clapton, Oasis, Elton John, Dire Straits, and the Red Hot Chili Peppers. The grounds are popular with youngsters, too, since the 28 acres of gardens include a maze and a wilderness area with an exciting dinosaur trail. The historic deer park covers more than 250 acres.

Pro Tip: If you wish to view the property but not use the facilities, there is a public access walk. The route goes through the grounds of Knebworth House and starts and finishes at the The Lytton Arms. Click here for details.

Letchworth Garden City is 25 minutes by train from London’s King’s Cross Station. The World’s End (2013) [the final in the Cornetto trilogy also featuring Shaun of the Dead (2004) and Hot Fuzz (2007)] was filmed here. This sci-fi romp follows five childhood friends as they retrace a pub crawl they didn’t have the stamina to complete in their youth. Their quest: 12 pubs and 12 pints, with the last drinks at a pub called The World’s End. With nods to The Hitchhiker’s Guide to the Galaxy, scenes include some crazy judo-chopping alien/robot slayings. But the movie is cleverer than it sounds, since the script weaves in Alcoholics Anonymous’s 12-step program. Ironically, Letchworth had Quakers among its founders. The Skittles Inn was “a pub with no beer,” and no licensed premises existed in Letchworth until 1974.

I hadn’t seen The World’s End when I visited in 2018. I went because of the town’s history as the first garden city. Horrified by the slums created by the industrial revolution, Ebenezer Howard planned a new town where human needs would be placed above industry and there would be a fusion of town and country. Letchworth ended up with certain oddities for the time, including Britain’s first roundabout, wide streets devoted to pedestrians rather than cars, stunning arts and crafts homes, woods almost in the center of town, and factories such as the Spirella Company, where workers had a library, ballroom, and gymnasium.

Today, the town is home to a stunning thatched-roof museum devoted to garden cities around the world. It shows how Howard’s influence extended to Garden City on Long Island, Jackson Heights in Queens, Woodbourne in Boston, Buckingham in Virginia, and Canberra in Australia. A historic walking tour weaves past most of Letchworth’s sites.

The World’s End showcases a surprising number of the town’s best features. Writer/creator Simon Pegg said that they chose the town because they “liked that idea as a site for alien invasion — it’s also like a crop circle when you look at it from above, with all the roundabouts.” Those who have experienced Britain’s roundabouts will know that Howard really started something.

Pro Tip: If you’d like to replicate the movie’s pub crawl, you can visit the pubs featured in the movie. They’re in Welwyn Garden City as well as Letchworth Garden City.

The Warner Bros Studios Leavesden is located about a 20-minute train ride from London. The studio’s The Making of Harry Potter tour, which opened in March of 2012, has been a phenomenal success, hosting 14 million visitors. All eight Harry Potter films were shot here.

You don’t have to be a huge Harry Potter fan to enjoy these tours, but it certainly helps. There’s nothing like rounding a corner and setting eyes on the Hogwarts Express. Visitors can relive the magic through the eyes of the filmmakers, step onto real sets, and find out how the special effects were created. What’s more, fans can tour Hogwarts’s Great Hall, meet animatronic creatures, and wander down Diagon Alley. The staff members can answer any question you ever had about the film series. Finish the day off with a butterbeer, but note that the gift shop and photos are expensive.

Tour tickets cost $60 for adults and must be booked online. Most people spend around 3.5 hours here.

Pro Tip: The other Harry Potter site in Hertfordshire is Ashridge Wood, and it’s completely free to visit. It’s where the Quidditch World Cup in Harry Potter and the Goblet of Fire (2005) was filmed. Enjoy a charming woodland walk famous for its bluebells and ancient trees. Mobility vehicles adapted for off-road use are available (they’re free, but they must be booked in advance). Ashridge Estate is run by the National Trust and located between Hemel Hempstead and Aylesbury. 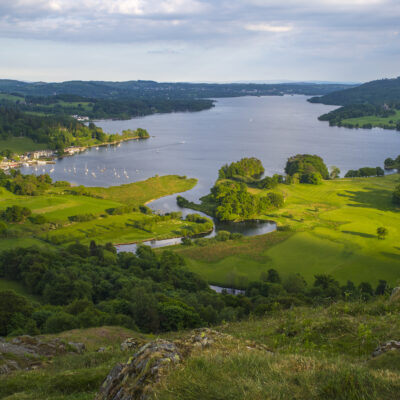