We’ve always enjoyed traveling around Christmastime. When the kids were little, it was the best time to go to avoid missing school or sports activities. Now that they’re older and working or in college, it’s still the best time to get away with them. Although sometimes it’s just the two of us now!

Being from the Midwest, where it’s always very cold and usually snowy at Christmastime, I’ve always loved to head south and soak up the sun during the month of December. But I know that people who live in warmer climates long to have a traditional Christmas experience complete with freezing temperatures and fresh-fallen snow. I decided to include both warmer and colder Christmas destinations so that everyone can find somewhere they’re sure to love weather-wise. And, of course, all of these towns really make Christmas come alive. Some towns are super over-the-top kitschy and some more sublime. Either way, you’ll have an enchanting Christmastime visit.

Branson is my go-to place for summer fun at the lake, but they also have awesome Christmas festivities. Known as America’s Christmas Tree City, adults and kids will love all the decorated Christmas trees around town. You’ll be able to see over 700 unique, decorated trees on a self-guided Branson Christmas Tree Tour.

A trip to Branson has to include a trip to one of the many theaters to see a show. They offer an incredible selection of Christmas-themed shows. You can see everything from variety shows and dinner shows to my favorite — Legends in Concert. For the best bang for your Branson buck, head to Silver Dollar City amusement park for An Old Time Christmas celebration. You’ll be amazed at the millions of twinkling lights adorning everything in Silver Dollar City, including over 1,000 Christmas trees!

After strolling through the park to enjoy the lights, make sure you stick around to catch the Christmas parade. Rudolph’s Holly Jolly Christmas Light Parade will keep you entertained with lights, nine lighted floats, and dozens of costumed characters. This is a real treat!

Jackson Hole is one of the most beautiful places I’ve been. At Christmas, Jackson Hole celebrates with an outdoorsy, old-fashioned flair. You can visit Santa at the Jackson Town Square nightly from December 15th to 24th. While at the Town Square, you won’t want to miss their unique arch made of elk antlers. It’s decorated with millions of twinkling lights to get you into that holiday spirit and is the perfect place to take a great holiday photo. For an only-in-Jackson activity, try a super fun sleigh ride through National Elk Refuge. You’ll be in a real horse-drawn sleigh and get a chance to see the wildlife up close.

Key West is one of my most favorite places on the planet. It’s hard not to have a great time in Key West, and Christmastime just elevates the fun factor. Start the festivities with a slice of history by touring Harry S. Truman’s Little White House, which is beautifully decorated for the holidays each year. You’ll see how President Truman loved to spend time in Key West for rest and relaxation throughout his presidency.

Another fun way to get into the Christmas spirit is to hop on a trolly in downtown Key West for the Old Town Trolley’s Holiday Lights and Sights tour to see all the historic Key West homes decked out in their Christmas splendor — island style! After the ride, meander over to Duval Street for appetizers and creative Christmas cocktails at one, (or many!) of the iconic bars like Sloppy Joe’s or Smokin’ Tuna Saloon. After you’ve had your fill, head over to Mallory Square where you can watch the awesome lit boat parade. You’ll see Christmas come alive on the water as the boats glide by in their outlandish tropical holiday decor. For a most untraditional (and memorable) Christmas activity, book a Christmas Day catamaran sailing trip.

Beautiful Asheville, located in the Blue Ridge Mountains, sets the bar high for a memorable Christmastime experience, and one thing is for sure: They hit the mark! To me, the top attraction in the area is the Biltmore Estate. In my opinion, you can’t go to Asheville at Christmastime and NOT go to the magnificent Biltmore! Built by George Vanderbilt, with approximately 250 rooms, it is the largest home in the United States, and every square inch is decorated for the holidays! You can be sure the Biltmore will be all decked out in its holiday cheer from November 6, 2020, until January 10, 2021. This home is huge, even by mansion standards! You’ll be blown away by the exquisite displays of magic and light at the estate. You can tour by day or night; or both to get a completely different feel. And, both tours come complete with wine tastings at the on-site winery for that little something extra.

Even though you won’t want to leave the Biltmore, there is so much more to do in the Asheville area, like checking out all the shops and galleries in downtown Asheville. For a really fun adventure, head to Bryson City about 60 miles away. While there, hop on the Polar Express Train for a special ride through the Great Smoky Mountains to the “North Pole” where Santa himself will greet you!

Gatlinburg is a great summer getaway, and for fall leaf-peeping it’s hard to beat, but it’s also a wonderful place to create some Christmas magic! Start with the incredible Fantasy of Lights Christmas Parade in downtown Gatlinburg. After the parade, take a trip to the top of the Gatlinburg Space Needle to get a fabulous view of the lights of the city below. The Space Needle is over 400 feet tall, so you’ll be sure to see it all. Don’t worry — you won’t have to climb to get to the top. You can take an elevator all the way up!

You also will want to check out Dollywood, the amusement park created by Dolly Parton, while you’re in the Gatlinburg area. Dollywood really pulls out all the stops at Christmastime and you won’t be disappointed! Explore all that Dollywood has to offer during the holidays beginning with Dollywood’s Smoky Mountain Christmas. It includes holiday shows, firework displays, and its own parade in the park. You can even stay on-site in a cabin complete with an outdoor hot tub on the deck for total relaxation and convenience.

There’s just something I love about spending Christmastime in Florida. Maybe it’s the fact that I know all my friends up north are freezing and knee-deep in snow, or maybe it’s the laid-back beachy Florida vibe. Whatever it is, I keep going back. Delray Beach is a quaint little beachside community the whole year, but at Christmastime, it becomes even more so. A lot of the action is in downtown Delray around Atlantic Avenue. Watch as Santa and Mrs. Claus arrive in style for the tree-lighting ceremony of the 100-foot Christmas tree in downtown Delray Beach.

It’s really cool because the inside of the tree is tall enough to walk through and is filled with different holiday themes like Santa’s workshop and the Train House. It’s actually been voted the best tree in the entire state of Florida, so you know it’s a good one!

Also on tap in Delray: The city’s annual skating rink where you can ice skate nightly in the warmth under the stars. And, of course, since Delray is a beach town, they have an awesome decorated boat parade. You can see all the boats decked out for Christmas as they flow down the Intercoastal Waterway. Delray also puts on a big parade with over 50 floats that runs down Atlantic Ave. Young and old folks alike will enjoy all the Christmas activities in beautiful Delray Beach.

You may know Taos as a mecca for artists, but did you know Taos is also home to one of the most famous churches in the U.S.? The San Francisco De Assisi Mission Church was built in the early 1800s and is the only church still intact in Taos from that time. Also known as the San Francisco De Asis Church, you can still attend mass there today, which is wonderful to do at Christmastime.

You’ll also see the streets aglow with thousands of farolitos or luminarias lining the road. Taos is a really spiritual place and the Christmas season there is all about tradition and light. The luminarias placed on the porches throughout the neighborhoods are a highlight. There’s something about the simple architecture of the traditional adobe homes combined with the soft glow of light from the luminarias that is absolutely stunning. There’s also the lighting of Ledoux Street, the historical street filled with shops, museums, and galleries. The merchants stay open late so you can shop and sample traditional New Mexico specialties like posole, tamales, and chili. There’s more light at the bonfires at Bent Street, where you’ll see traditional bonfires along with Aztec dancers. 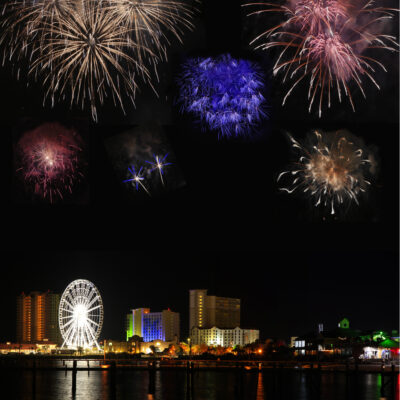 Holiday TravelBest 4th Of July Celebrations Along The Gulf Coast 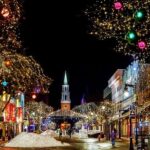 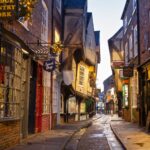 Holiday TravelWhy You Should Visit York, England During Christmas 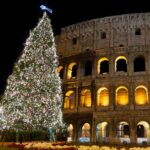 Holiday TravelChristmas Traditions From 17 Countries Around The World