9 Unique Spots You Can Only Discover In Nebraska

Did you know that Nebraska is home to a museum of clowns, a collection of vintage windmills, and America’s smallest town?

People often think of Nebraska as a flat state and a long drive, but I recommend that you get off the interstate to see the real Nebraska. Never judge a state by what you see along the interstate! To really enjoy this state, you’ll have to follow the smaller, more scenic highways through rolling hills, small towns, and river valleys. You’ll quickly learn that the Cornhusker State is far from flat, and as you travel the byways, you’ll see the real Nebraska, full of interesting and somewhat odd attractions.

Nebraska offers plenty of small towns with interesting scenery, great restaurants, and friendly people. I recommend checking out some of the state’s most unique attractions, especially these nine oddities.

The world’s largest collection of clown dolls, figurines, paintings, and more awaits you at the Klown Doll Museum in Plainview, a northeastern Nebraska town located about 78 miles west of Sioux City, Iowa, along the historic U.S. Highway 20.

It all started when a chamber of commerce assistant put a clown doll in a window near her desk. People started dropping off other clowns, and the collection grew. Eventually, it became so large that the locals decided to open the Klown Doll Museum in a former service station. A few people donated entire collections of 1,000 to 1,200 clowns, and now there are more than 7,000 figurines, mugs, and ornaments in the three main exhibit rooms. You’ll also find replicas of clown paintings by comic Red Skelton and a room dedicated to the classic clown entertainer Emmett Kelly. It would be easy to spend an hour or two at the Klown Doll Museum.

Plainview’s affection for the colorful entertainers dates to the 1950s, when local businesspeople formed a community band called the Klown Band. Still active, the band has performed at the Nebraska State Fair.

My wife and I are huge fans — no pun intended — of “world’s largest” attractions, and the world’s largest porch swing calls Hebron home. Located along southeastern Nebraska’s Heritage Highway Scenic Byway, Hebron sought to attract more visitors, so locals decided to create a large porch swing. Using irrigation pipes, they constructed a porch swing capable of holding 16 adults or 24 children. While it’s not quite a porch swing in the truest sense, the swing sits inside a shelter in the city’s downtown park. Other communities have challenged the 32-foot-wide swing, but their efforts haven’t been able to surpass the stability of the Hebron porch swing.

Imagine Stonehenge, only with automobiles. Located near Alliance, about 2.5 hours northwest of North Platte, Carhenge is a monument to the artist’s father, who became fascinated with Stonehenge while studying in the United Kingdom. Jim Reinders painted 38 classic cars gray to create his version of Stonehenge. Later, Reinders and his family donated Carhenge to the city as a tourist attraction.

Today, thousands of people travel from around the world to visit the unique site. Other art pieces at the park include a park bench made from car parts as well as a dinosaur and a “covered wagon” — a station wagon with a Conestoga wagon frame.

A purportedly possessed doll named Ayda awaits at the Museum of Shadows in Omaha’s Old Market, where fans of the paranormal enjoy venturing in search of spirits. Formerly located in Plattsmouth, the four-year-old museum has consistently ranked among the most haunted attractions in the world.

Owned and operated by ghost hunters, the Museum of Shadows is located in a four-story historic building and is home to the world’s largest collection of allegedly haunted items — 3,000 of them, to be exact. Take a self-guided tour and challenge yourself to sit in the dark among the dolls and toys for 10 minutes — if you dare!

5. Sentinels Of The Prairie, Jackson

A neat vintage windmill collection is located outside of a landfill in Jackson, about 6 miles west of Sioux City, Iowa. What began as a trip to an auction to pick up a train caboose to help create an attractive entrance to a local landfill ended with a trip to a farm to see several old windmills. Ever since, people have been visiting the L P Gill Landfill’s Sentinels of the Prairie exhibit featuring 27 classic windmills from the 1880s through the 1930s.

The collection includes rare windmills, such as a green-and-white windmill that was one of only a handful produced; vaneless windmills; and a contemporary display of windmills commonly seen on farms. You’ll also see Western wagons and the caboose that started it all. And don’t worry about the landfill; you won’t see it, because it’s located well off the main entrance.

About 12 million years ago, miniature horses, miniature rhinos, and camels (Yes — Nebraska was once home to the largest camel population in the world!) gathered near a Nebraska watering pond. One day, a volcano erupted in the western United States. Within days, ash had covered the skies and land, and it buried the animals under tons of debris. In 1971, a University of Nebraska paleontologist discovered the fossil of a baby rhino in a cornfield. Today, the dig site is a popular attraction.

Located near Royal, the Ashfall Fossil Beds State Historical Park features a boardwalk overlooking a working dig site inside the Hubbard Rhino Barn, where you’ll see actual fossils in the limestone. You can talk with the paleontologists or interns as they dig and brush spots where they believe fossils are located. The visitor center is home to fossils discovered at the site as well as the fossil of a plesiosaur that was found near the Santee Dakota Reservation. You can also watch researchers work inside the lab and explore the park’s nature trails.

Nicknamed Nebraska’s Badlands, Toadstool Geological Park looks like a landscape from another planet. Its rock formations, carved from wind and erosion over millions of years, resemble giant toadstools, and the former river bed is one of the state’s most popular natural attractions to hike and camp near. Become an amateur paleontologist and search for your own fossils.

The park features three hiking trails, everything from an easy mile-long loop near the trailhead to the Buffalo Trail, a three-mile trail that extends to the Hudson-Meng Education & Research Center, where you can learn about extinct bison species. A 5-mile trail takes you along a gravel section to the badlands and on to the grasslands of the Great Plains Trail. It eventually circles back to the campground and the Buffalo Trail.

Situated in Nebraska’s Sandhills, the village of Taylor, with about 180 people, sought a way to attract visitors to their community. Marah Sandoz, whose husband is a relative of Nebraska author Mari Sandoz, created the black-and-white Taylor Villagers. These represent people from Taylor’s past, especially those who lived there from the 1890s through the 1920s. Located throughout the community, the 140 life-size wooden art pieces include a girl playing with a stroller, friends hanging out on a bench at the library, a cowboy offering flowers to a woman, and two boys walking to town with fishing rods on their shoulders.

America’s smallest town, Monowi, located in northeastern Nebraska on Highway 12, has a population of one. Elsie Eiler, now in her mid-80s, serves as the mayor, town council, and street maintenance director. She’s also responsible for collecting the village’s taxes, which is easy, since she runs the only business in town.

The Monowi Tavern is a bar and grill where Elsie will serve you a cold drink, grill you a burger, and sit down to visit with you. Elsie has been featured in television commercials and programs as well as several magazine articles. She also manages the 5,000 books at the Rudy Library, named in honor of her late husband, who collected and read each book. At the Monowi Tavern, you can purchase souvenir T-shirts and caps that celebrate America’s smallest town. 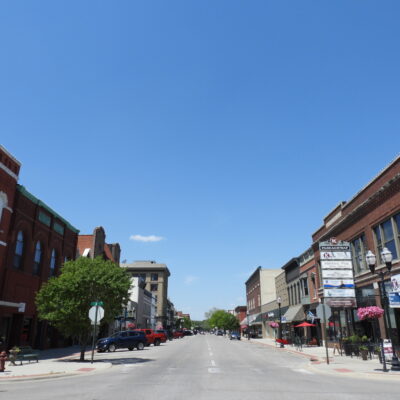 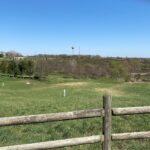 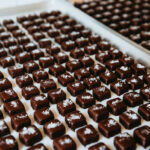 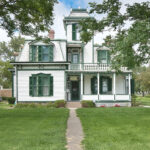