Sir Henry Cole was a British inventor and educator and the first director of the Victoria and Albert Museum in London. Being so busy, he had less time to tackle tasks like replying to the many letters he received from family and friends at Christmas. Sometime during the Christmas season of 1843, he had an idea: He would persuade his artist friend John Horsley to illustrate a card for him, which he would then mass-produce and send out to everyone he knew, simplifying the laborious task of writing Christmas letters. The world’s first Christmas card was born.

Today, there are around a dozen of these cards left from the first print run, making them very rare, but there are a few places where you can view them. In 2001, one of the original cards was sold at auction for £22,250.

Here are six places to visit in and around London that are associated with that first Christmas card.

Cole was the founding director of the Victoria and Albert Museum (V&A) in South Kensington, so it’s only fitting that this incredible museum should hold in its collections one of the cards from that very first print run. After Cole sent out the cards to his friends and family, he decided to make this a commercial venture. He sold his Christmas cards for a shilling each, which proved to be too much for the general public, and the venture was at first a failure.

You can view the card in the museum, along with 145 galleries dedicated to art and design. Entry to the V&A is free. The museum has a beautiful courtyard garden and a stunning restaurant that will make you feel like you’re sitting within one of the exhibitions!

Cole revolutionized the postal system in Britain, and when Christmas became more commercialized and more popular following Prince Albert’s introduction of the Christmas tree into private homes, the Christmas card finally took off.

The Postal Museum in London has one of the original cards on display, plus other interesting Christmas cards and Christmas stamps. Entry to The Postal Museum is by ticket only; included in the price is a ride on a miniature train in the 100-year-old underground Mail Rail. There’s an additional charge for exploring the Mail Rail tunnels. (The tunnel walks involve treks on uneven ground through passages with low lighting.) Other exhibitions feature rare post boxes, postal vans from different eras, and other significant cards and stamps.

You can read more about this unique museum here.

Charles Dickens knew how to play to his audience, and he knew just what people wanted. When he wrote A Christmas Carol, he might not have realized just how long its appeal would last, but he knew the Christmas story would be a hit. Along with the royal family, Charles Dickens is one of the Victorians credited with making Christmas what it is today.

The author’s former home in London is now the Charles Dickens Museum, which features a display of all things Christmas. Manuscripts and original illustrations for his Christmas stories are displayed along with one of the world’s first Christmas cards. The museum spans four floors, and a lift is available to all of them except the attic.

Victorian Britain saw the beginning of a more commercial and more widely celebrated Christmas, but the Victorians had strict moral sensibilities, and the first Christmas card caused a bit of a stir when it was originally sold. The card took off and was being widely distributed by 1845, but some straight-laced Victorians noticed that in the jolly scene of a family Christmas was a child who appeared to be happily knocking back a glass of wine! There were complaints about this, but the illustration by Horsley stood the test of time, and the controversy eventually passed.

A reproduction of the card is on display at The British Library in the Romantics & Victorians collection. The British Library is a stunning building and an architectural gem. There are two cafes inside, including one with a terrace overlooking Saint Pancras Station. You’ll also find a gift shop, reading rooms, and other exhibitions.

The Brompton Cemetery is one of the most beautiful cemeteries you’ll ever visit. The suffragette Emmeline Pankhurst is buried here, along with noblemen, engineers, writers, philosophers, footballers, and Cole himself. Brompton Cemetery is also a royal park and the final resting place of one of Queen Victoria’s ladies-in-waiting. The park is adorned with yew trees and tulips, fountains, statues, and monuments in addition to tombs. It’s a fascinating place to explore, and you could spend hours browsing the gravestones before relaxing in the Cafe North Lodge.

A cemetery with an on-site cafe might seem unusual, but on a visit you’ll see that this cemetery is as much a tourist attraction as it is a burial place. Many of the graves are overgrown and have been reclaimed by nature, but a handy map will show you who is buried where. Don’t miss the catacombs, which offer unique insight into Victorian burials. Old coffins are stacked on shelves in this underground burial chamber. It’s eerie and not for the easily spooked, but it’s an incredible spot in this most unusual cemetery.

If you weren’t sure just how successful Cole was in his life, a visit to his former home in Hampstead, London, will give you an idea. The house is a private residence that recently went up for sale for £6 million. While you can’t go inside, you can view the plaque on the wall outside. Cole was sometimes known as King Cole because he was such an important community figure, and the plaque reinforces his standing in his own neighborhood and throughout London. The plaque is now located on the entrance to the home’s garage, but the two pillars at the sides give you a glimpse of what the entrance to this most spectacular London home would once have looked like.

Once you’ve followed the trail of the world’s first Christmas card around London, head to Devon to stay at Horsley’s former manor. Horsley designed the first Christmas card, which featured that controversial wine-drinking child. He also painted a portrait of his brother-in-law, the engineer Isambard Kingdom Brunel, right here in this house.

Orestone Manor is now a stunning hotel run by two former chefs. The house still feels very much like a home, and you can relax in the great hall over a drink in the evening and imagine what it must have been like to live there. With the sea lapping against the rocky coastline at the bottom of the hill, the palm trees swaying in the breeze, and the house’s original features on display, a night at Orestone Manor is like stepping back to Victorian times, when King Cole first came up with the idea of the Christmas card and Horsley made his famous illustration. The views are spectacular, the food is delicious, and the rooms have incredibly spacious bathrooms!

Don’t miss the old funicular railway in neighboring Babbacombe that ferries visitors up and down the cliffside to the seafront and back.

You can take the Tube to all of the London locations mentioned above, but London is also a great place to explore on foot. If you work out your route in advance, you’ll find that many of the locations aren’t that far away from one another. You’ll need a couple of days to do this tour justice, since the V&A alone has the most incredible displays and could easily take up to half a day to see.

The area around Orestone Manor is quite rural, and the nearest train station is in Torquay, so be prepared to take a few taxis if you don’t have your own car. 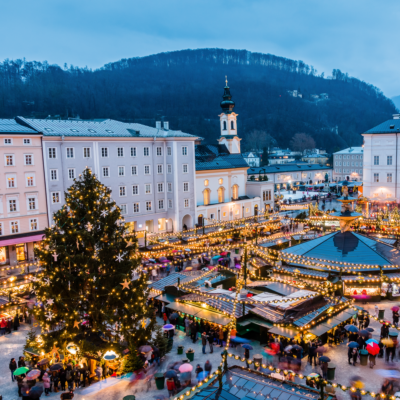 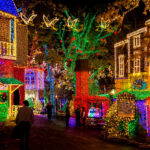