10 Beaches To Visit Before Summer Ends

Summer might be coming to a close, but that doesn’t mean you can’t enjoy the beach one last time. Worth-the-trip beaches can be found all around the U.S., even in landlocked states!

We talked to several travel experts about their favorite beaches around the country. Some are more populated beaches you might already know about, but a few will catch you by surprise.

The following list will inspire you to get your perfect beach fix before cooler weather sets in.

Anna Maria Island is a barrier island in western Florida. Charles McCool of McCool Travel ranks it as one of the best in the country.

“Anna Maria Island has the whitest, softest, cleanest sand in the Lower 48 U.S. states,” he said. In addition to expert-approved sand, he loves that the island never seems crowded.

“When looking for a splurge, order both lobster appetizers from Beach Bistro [in Holmes Beach, a city on Anna Maria Island], one of the top ten Zagat rated restaurants in the U.S.,” Charles said. Anna Maria Island offers an impressive assortment of high-quality restaurants as well as other beachy, entertaining things to do.

“I’ve probably been to every beach in Florida, and while there are many stunning ones, I was most smitten by the three beaches at Bahia Honda State Park in the central Keys,” said Barbara Weibel, writer of the travel blog Hole in the Donut.

“They are stunningly beautiful, with pure white sand and that gorgeous seafoam green water that is found throughout the Caribbean,” she said. The state park’s beaches have a little something for all beach-goers. Some areas are populated enough to get to know fellow travelers, but other areas afford stretches of quiet, uninhabited shoreline. For a more immersive water experience, visitors can enjoy a diving or snorkeling expedition.

“The best way to experience the Florida Keys is to drive from South Florida to Key West. It’s a long drive, but Bahia Honda is perfectly located for an early afternoon stop to relax and rest up for the rest of the drive,” said Barbara.

Roxie Yonkey of Roxie on the Road has a recommendation for those who can’t easily make it to the coasts. She suggests a visit to Cedar Bluff Reservoir near WaKeeney, Kansas.

The reservoir is home to camping, fishing, boating, and even jet skiing.

Lake Havasu City on the Colorado River is home to 400 miles of shoreline fun. Cindy Barks, the writer behind Arizona-specific blog NearandFarAZ, has a soft spot for the area.

“You have the unique experience of floating on the water of the Colorado while gazing up at the 1830s-era London Bridge, which was transported to Lake Havasu in the 1960s and reassembled. There’s something about that Colorado River/River Thames juxtaposition that is so uniquely Arizona,” Cindy said.

She went on to tell us that even though Lake Havasu City often hosts spring breakers, the boardwalk near London Bridge has a “strong family vibe.”

“My favorite times along Lake Havasu’s beaches have been spent at the beautiful Rotary Park, where large groups of friends and family gather in the picnic areas, grilling hot dogs and cooling off in the river on a huge assortment of floatation devices. From the park, you can easily walk along the flat concrete boardwalk to the London Bridge area,” Cindy said.

Orange Beach, Alabama, is a barrier island about 30 miles from Pensacola in Florida. Sage Scott loves this beach because it’s a lesser-known beach in the Gulf.

“For less than the average night’s stay at a hotel, we secured beachfront accommodations,” Sage said. Instead of going all out on lodging, you can spend that extra moola on water adventures or on some unforgettable food, as Sage did!

“Each morning, we took long walks along the coast as brown pelicans dive-bombed the surf, scooping up fish. Each night, we fell asleep to the gentle lullaby of the waves. And the water that laps against the white sand is chock-full of some of the best shrimp, oysters, and flounder you’ll ever eat,” said Sage.

Lake Michigan is home to some gorgeous beaches. You just need to know where to look! Oval Beach is nested in the Saugatuck/Douglas area. TravelAwaits writer Mike Owens is fond of Oval Beach.

The beach has picturesque, rolling sand dunes with space by the water to camp out with family and friends.

Lovely beaches are in abundance in Hawaii. But Veronica James from The GypsyNesters has one beach that tops the rest.

“Hawaii has many white, and quite a few black beaches, but [Papakolea Beach] has sand even more unusual [because] it’s green. This phenomenon is so rare that there are only four examples in the entire world,” said Veronica. In fact, Papakolea made our roundup of 11 colorful sand beaches you have to see to believe.

The story behind the name of the beach adds to its allure.

“Papakolea Beach is named for the kolea bird that is often seen nearby,” Veronica told us. The sand “gets its curious coloring from the mineral olivine, a magnesium iron silicate. The crystals eroded out of the volcanic cone that forms the steep sides to the beach.”

Accessing this unique beach isn’t quite a cakewalk, according to Veronica. You’ll either need to hike or take a ride with a local, as Veronica suggested.

“Word was we could probably snag a ride across the fields in a four-wheel drive — for a price. So we drove our rental car to the parking lot at the end of South Point Road and sure enough, 20 bucks bought us a spot standing up in the back of a four-wheel-drive pickup truck. Hiking the two and a half miles to the beach is also an option, but this looked like fun,” she said.

Charles McCool also loves coastal Mississippi between Biloxi and Pass Christian — both for the drive and for the beaches.

“My favorite stretch is from Pass Christian through Long Beach to Gulfport — a 12-mile drive with continuous sand and Gulf of Mexico views. This coastal drive is such a rare and empowering treat,” Charles said.

“Plentiful, convenient, and free parking spots right next to the luscious sugar sand are so inviting that I have yet to drive all 12 miles without stopping. Sinking my feet into the clean, soft, 100-foot-wide sand in Pass Christian is one of life’s most memorable experiences. Y’all gotta try it,” he said affectionately.

He recommends continuing a scenic Gulf Coast road trip with dining at White Pillars in Biloxi and Vestige in Ocean Springs.

“Many times there were few people on the beach and we had plenty of space. But it still has the soft powdery sand and the very warm Atlantic Ocean water,” she said. In addition to privacy with lovely sand, Robin also enjoyed the overall environment there.

Roxie — who suggested the beach getaway in Kansas — also recommended another Midwestern paradise by the name of Swanson Reservoir State Recreation Area.

Visiting the beach is fun year-round, but visiting toward the end of summer has extra appeal. As cooler weather approaches, now is a great time to get away for a beach vacay. 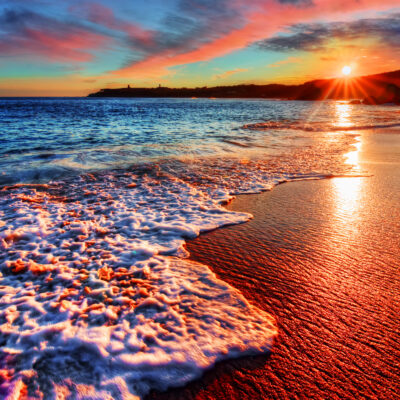 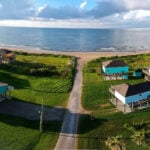