10 Places To Explore Along Galicia, Spain’s Coast Of Death

The Coast of Death, or Costa da Morte in the local language, is a 120-mile stretch along the Atlantic coast of Galicia, Spain’s northwestern province. Don’t be frightened by the somewhat morbid name. It does indeed come from numerous shipwrecks which occurred here over the centuries, when vessels came to grief on the rocks, shrouded in mist, which are the characteristic image of Spain’s wildest and most fascinating landscape.

What you find and will want to explore during a three-day road trip in the area, however, are its memorable lighthouses, dreamy fishing villages, Europe’s highest sand dune, historical monuments, and landscapes you will wish you could paint (and maybe you can!). Legends of witches and the devil, saints and hermits, and the ghosts of drowned sailors will be shared by friendly and hospitable locals whilst they serve you with the best and freshest seafood, tasty cheeses, and potent liquors to help your digestion along the way.

The coast reaches from Muros to Malpica, but I recommend going on to A Coruna, if only for the legendary beaches. You’ll deserve a relaxing break after the eventful three-day journey. If you really want to explore, rent a 4×4 because some of the roads are rather rough.

Galicia is well known for its rich vegetation, the national flower, the camellia, among it. The reason for such abundance is that it rains a lot and the temperatures are much lower here than in the rest of Spain. The best time to visit is during the summer months. Never fear, this region is still very much an in-the-know destination, so you won’t have to contend with tourist crowds during your exploration. Here are the best places to visit along the way

You might have arrived in Galicia in the city of Santiago de Compostela, famous for the cathedral and as the endpoint of the St. James pilgrimage, Camino de Santiago. The Rosalia de Castro airport, named after Galicia’s most famous poetess, serves several international airlines, and here is where you get your rental car for your trip up the Coast of Death, probably after having spent a day or two in Santiago.

Set off early because although you won’t cover a great distance on your first leg of the road trip, there is much to do and see along the way, and you need time for it.

Heading west, your first stop is the lovely town of Muros. Located at the northern entrance of one of the many bays along Galicia’s Atlantic coast, this community is known as the Muros y Nois ria. Ria is the local name for these inlets.

Stretch your legs and walk along the promenade of Muros, admiring the predominantly white houses with the typical glassed-in balconies on the first floors. You’ll see more of these in A Coruna.

It’s only a half-hour drive along the AC-550 to Carnota, your next stop. Everywhere in Galicia, you will see stone structures on legs with slits on the side and a cross on top. At first sight, they may be baffling. They are called horeos, and they are traditional grain storage units. The biggest and longest stands in Carnota — just follow the signs and have a look. The town is also known for a fabulous beach and the dramatic Fervenza do Ezaro waterfall nearby. The sight is well worth the little detour.

The charming town of Finisterre is where you will spend your first night. I stayed at the lovely, family-run Hotel Ancora. The daughter speaks fluent English and is an expert on local history and legends. Talk to her.

Pro Tip: You can leave your car right in front of the hotel.

Finisterre is and always has been a fishing town. Make your way to the port and look at La Lonja, which is where, in the early morning, the latest catch is auctioned off in a pretty noisy fashion. Next to it, you see the Castle of San Carlos, which has seen a lot of battle. Climb up to it and visit one of the highlights of Finisterre, the museum dedicated to fishing and shipwrecks. It’s fascinating to watch the videos showing the dangers and hardships the fishermen endure to catch the delicacies you will enjoy in one of the great local restaurants.

Walking the streets, you will see many pilgrims who have made the St. James pilgrimage, recognizable by their walking sticks, the shells around their necks, and their dusty hiking boots. They are on their way to the Cape Finisterre Lighthouse.

Since Roman times, this has been recognized as the westernmost point of Spain and has been considered the end of the world. Nothing is between you but the crashing waves, forbidding rocks, and the wild Atlantic — all the way to America.

Like the pilgrims, the famous lighthouse is your destination. It is approximately 1.5 miles from the center of town, and you can walk, drive, or take a bus to reach it. The road is steep and winding with fabulous views of the coastline and Finisterre’s white beach, Playa de Langosteira. A statue of a female pilgrim stands along the way, and she always has a bunch of fresh flowers in her arms.

The lighthouse can be visited, but be careful walking around on the rocks. Quite a few tourists have fallen to their deaths, including some who wanted a special selfie.

The aforementioned pilgrims come here because, in their view, Cape Finisterre is the true end of the St. James pilgrimage. To mark the beginning of a new, better life, they burn their travel clothes in a quite emotional ceremony at the foot of a bronze boot that stands on a single rock. If you are lucky, you may witness this event.

Back in Finisterre, have dinner in the hotel. The owner is an excellent chef. Enjoy oysters, carabiniere (king prawns), pulpo Galego (squid), and more, washed down with some of Galicia’s famous wine while listening to tales of the Celtic origins of the place.

The next morning, your journey continues to Muxia. The road leads away from the coast, over wooden bridges, through dense forests, and past many more horeos. In Muxia, you are back at the coast in one of the typical Galicia seaside towns with a port, a nice promenade, a town square, and a church. It’s not totally clear , but apparently, in reality, nearby Cabo Tourinan, not Cap Finisterre, is Spain’s most westerly point, but you can’t get there.

Muxia has its own, more accessible magic in the form of an oddly shaped, long rock, curved to the extent that a person can stand underneath its tip. Legends even attribute healing powers to the stone.

From Muxia, we head to Camarinas, where we will spend the second night.

The road along the coast takes us to the English Cemetery, a memorial to one of the horrific maritime catastrophes that have defined the Coast of Death. On November 10, 1890, a British frigate by the name of Serpent crashed in dense fog into the rocks near Camarinas. All but three of the young cadets drowned. The survivors were rescued by nearby villagers. During the following days, bodies were washed ashore and buried in what is now known as the English Cemetery.

On the way, you come across Monte Branco, Europe’s highest sand dune at nearly 500 feet. Here, you’ll be glad for your 4×4 as the road leading up to the dune is sandy and uneven. Leave the car, follow the signs, and take the footpath to reach the top, where you can gaze down at the coast and the cemetery. Never step off the designated path. This is essential to preserving the dune’s vegetation.

Camarinas is one of the prettiest coastal towns in this part of Galicia. Located around a nearly semi-circular bay, a wooden walkway leads all around, allowing you a view of the port and fishing boats on one side and the town on the other. At the end of the walkway stands a house with a ship’s barometer embedded. It’s actually a relic from the Serpent.

What you will notice here are the many shops selling the most elaborate lace items and girls sitting in the shop windows making them with nimble fingers. In fact, Camarinas is the lace-making center of Galicia. Head for the town square and look at the massive statue of a lacemaker, right next door to Museo do Encaixe, the lace museum. Many top Spanish designers use lace from Camarinas for their creations. In Camarinas, you also have a great opportunity to buy some really nice souvenirs. From handkerchiefs to table cloths, you have great choices, although none of it comes cheap.

To sample some of the best seafood in Galicia, head for A Marina. The restaurant is reopening in a new venue and with an even more delicious menu.

Choose a Camarinas hotel based on your budget, check in, and head for Cabo Vilan.

On Cabo Vilan stands one of Galicia’s most famous lighthouses, looming over 400 feet high on top of a rock. The lighthouse keeper’s house is attached at the bottom. The house is also a museum, meaning you can visit. The location marks one of the most dangerous but also most beautiful parts of the Coast of Death.

Malpica is at the end of the Coast of Death. On our way there, we drive through Ponteceso, a town with beaches and parks. It’s the birthplace of famous Spanish author Eduardo Pondal and has monuments in his honor. It’s only some ten miles from Ponteceso to Malpica. The first thing that catches the eye are the houses, hanging precariously over the rocks. There are some typical rural homes to admire in Malpica, too, plus a great view of the Islas Sisargas.

It’s only a half-hour drive to the thriving port town of A Coruna, where you might want to end your trip and return the car. The city’s most famous landmark is the Roman Tower of Hercules, a lighthouse that’s been in operation for centuries. Enjoy the beaches of Orzan and Riazor, and extend your stay in Galicia so you can explore further if your schedule permits.

Galicia’s Coast of Death is still very much a destination off the beaten path, which means that in the smaller places nobody speaks English, and often only Galego is spoken. But you’ll get by. Be prepared for the occasional rain shower even in the height of summer. With the right clothes, car, and attitude, you’ll have an experience of raw nature, history, and a culture that will cast a spell over you. Planning your Spanish vacation? These are the best things to do in Toledo, Spain: where to stay, eat, and play. 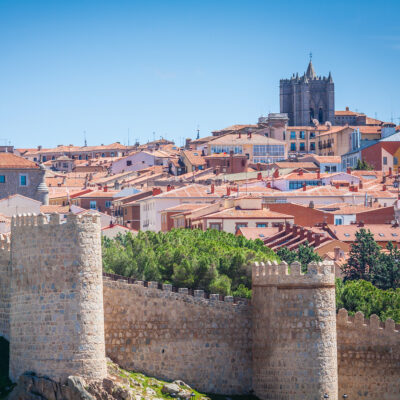