While RVing our way back to the Pacific Northwest after our first winter in Florida, we visited only the largest of Tennessee’s cities: Knoxville, Nashville, and Memphis. On the way back to Florida for our second winter, we decided to see its rural side.

Since we had loved our drive through the Blue Ridge Parkway in North Carolina the previous year, we chose to drive the only other parkway in the U.S.: the Natchez Trace Parkway, which is also maintained by the National Park Service. It winds among the low hills south of Nashville. We were even inspired to go to the small Alabama section of the parkway that crosses the state’s northwestern tip, and to a nearby city in Mississippi.

Once essential to commerce, improved transportation infrastructure — steam boats, stagecoach lines, and railroads — and the development of ports along nearby rivers rendered the Blueridge Parkway obsolete. As a result, no major population centers — except for the cities of Tupelo and Jackson in Mississippi, which were developed later — were born along it. Thus, today, the Natchez Trace Parkway is almost completely unspoiled, a quiet forest lane with the look and feel of the past, especially in its sections in Tennessee and Alabama. Here are some of the stops we made.

We camped at the Natchez Trace Wilderness Preserve in Hohenwald, Tennessee. It’s an 830-acre forested campground that is truly a wooded oasis. There was a three-mile-long lake with excellent fishing and where pontoon tours were being conducted. Just a little over an hour from the northern terminus of the Natchez Trace Parkway, which is in Franklin, Tennessee, it was a perfect base for exploring the northern half. It is also only an hour and a half from Nashville.

Near the parkway’s northern terminus at Milepost 444 stands the striking concrete double-arched Natchez Trace Parkway Bridge. At 145 feet high, it commands the intersection of the Parkway and State Route 96 at Birdsong Hollow. It is 1,572 feet long and 37 feet wide and was the first segmentally constructed concrete arch bridge in the U.S. The design does not use the spandrel columns that are usually relied on to distribute the weight of a bridge along its length. This is called a cathedral arch bridge, and the weight is concentrated at the crown of the arch, giving the bridge a clean appearance.

Columbia, just an hour from Milepost 416, is where the home of James Polk, 11th president of the U.S., stands. Polk only served for one term and died just three months after leaving office. He won the Mexican-American War for the Union, and his legacy became the annexation of the rest of the West after the Lewis and Clark Expedition. He was sickly from the start, but, being a workaholic, it is believed that the hard work he put in may have cost him his life. At the home/museum, you will find two photos next to each other, one taken just before he died, showing how he had changed in only a year. Seeing the newer grand presidential libraries, this museum is quite simple and unadorned.

It was just an hour more after Columbia, Tennessee, so we also visited the Jack Daniel Distillery in the town of Lynchburg. It produces the top-selling American whiskey in the world. What is ironic is that the distillery is in Moore County, a dry county. Thus, the liquor they produce cannot be sold nor consumed there. The story goes that when he was only seven years old, Jasper Newton “Jack” Daniel started working at the general store owned by the man who also owned the still. When he turned 13, he bought it for only $25, and the rest is history.

One morning, Daniel went to work early. Unable to remember the combination to the safe, he kicked it in frustration, breaking his big toe. Gangrene set in, which eventually resulted in his death. The lesson is “Don’t go to work too early!” The company now has over 500 employees in a town with a population of 6,000 and produces 16 million cases, or over 31 million gallons, of bourbon for domestic use and export annually.

The Old Trace was established in 1801, while the parkway began in 1930. Old Trace Drive commemorates the original route following the “traces” of bison and other game. In essence, it was the original path of the earliest Americans on the move. Parts of the Old Trace are still preserved, letting the travelers of today feel how it was to traverse the road in the 1800s. In addition, it was our tremendous luck that we were there during fall because the colors were spectacular. The section of the Old Trace we visited was at Milepost 397.4.

Very near where we were camped in the town of Hohenwald, the Meriwether Lewis Memorial stands close to Milepost 385.9. The site is where Meriwether Lewis died, at the age of 35, under very mysterious circumstances. Syphilis, suicide, and even murder were suspected. Together with William Clark, he headed the Lewis and Clark Expedition, the three-year (1803 to 1806), 8,000-mile exploration which resulted in the doubling of the size of the U.S. with the Louisiana Purchase. The monument is incomplete and stands above Lewis’s burial site and near the roadhouse where he died. It symbolizes a life that was cut short, a life that could have been so much greater, given what he had accomplished in his years.

Even though Ivy Green, Helen Keller’s birthplace and childhood home in Tuscumbia, was a two-hour diversion from the Natchez Trace Parkway, I really wanted to go because she was the major inspiration in the life of my mother, a tireless teacher of the deaf. Despite being rendered blind and deaf from a high fever at the early age of 19 months, the First Lady of Courage was able to graduate from Radcliff, now part of Harvard University, cum laude thanks in part to the dedication of her beloved teacher Anne Sullivan. She even went on to write 14 books and was a sought-after inspirational speaker until she died at the age of 88. At Ivy Green, a so-called moon tree was planted and grown from a seed carried in the Apollo 14 space flight to the moon. It was growing very well when we visited.

We also couldn’t resist going to the Elvis Presley Birthplace in Tupelo, Mississippi, just 45 minutes from Milepost 259.7 and an hour and a half from Tuscumbia. It is another big draw to the Natchez Trace Parkway, much more so than Ivy Green. Of course, The King has a wider appeal. Having been to Graceland the previous year when we visited Memphis, it was a great opportunity to see his home from the time he was born to the time he headed for Memphis and stardom. Gospel singing influenced Elvis’s music so much that the church which he attended as a boy and teenager was relocated to the site of his very humble home, only one block from its original location. On the grounds, there is also a museum in Elvis’s honor.

Had we gone on to visit Jackson, Mississippi, we would have also seen — aside from the bustling city of Jackson — more of the southern portion of the Natchez Trace Parkway. And we would have probably been as fascinated by the Windsor Ruins, the patches of red clover, and yellow wildflowers on the river bend. We promised ourselves that when we cross the Gulf States again, we would complete that part.

We saw many hiking trails as we drove the parkway, and you will, too. Clear streams, little falls, shallow swamps, gentle meadows, pretty trees, and wild turkey were abundant. We even chanced upon a gravesite of 13 unknown Confederate soldiers. At Donivan Slough, I was fascinated by the cotton fields that almost looked like acres of pock-marked snow. It was my first time seeing those fields where many slaves and their descendants toiled, a symbol of their strife, especially prior to the Civil War. Then there were the Native American burial mounds, even bigger and higher (though not in special shapes like snakes) than the ones we saw at the Effigy Mounds National Monument in Iowa. Make time for these experiences, and note that you can also start your drive of the parkway from Mississippi in the south rather than in Tennessee in the north. 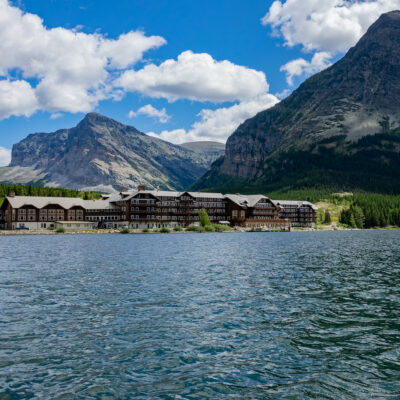 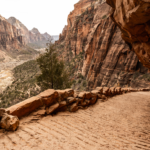