5 Historic Royal Palaces You Must Visit In London

London is full of palaces, former palaces, and the sites of vanished palaces. Historic Royal Palaces, an independent, self-funding charity, manages five of the best: the Tower of London, Hampton Court Palace, the Banqueting House, Kew Palace (closed in the winter), and Kensington Palace. All are open to the public and charge admission.

Buckingham Palace, the official London residence of Queen Elizabeth II, is not managed by Historic Royal Palaces. It’s still very much in use by the monarch.

Here’s a snapshot of the Historic Royal Palaces in London. The decisions made in these places have affected national life for centuries.

The Tower of London can keep you busy all day. You’ll want to allow at least half a day for this UNESCO World Heritage site. It’s a whole complex of buildings within two circular walls.

This indoor-outdoor site has a medieval feel. Even though it has been a royal residence (and a zoo, armory, treasury, prison, army base, and much more), it’s hard to imagine the Tower as a luxurious place to live.

Walking on the thick stone walls like an archer of old, you get a great view of Tower Bridge and the River Thames.

The oldest part of the complex is the White Tower. Built for William the Conqueror after the Norman Conquest of 1066, it’s a symbol of London. On the grass nearby, the famous Tower ravens come and go, but they don’t leave. (That would be bad luck.)

On busy days, there can be a line to see the Crown Jewels, but it’s a one-of-a-kind experience. You move through dimly lit, quiet spaces with some of the world’s most stunning pieces of gold, diamonds, and jewelry just an arm’s length away.

A simple sculpture on Tower Green names some of the people executed there. Anne Boleyn, the famous second wife of the Tudor King Henry VIII, is among them.

Children like the animal sculptures that represent the residents of the old Royal Menagerie. My favorite is the elephant.

Visitors of all ages admire the dazzling armor for kings and horses displayed in the White Tower.

Hampton Court Palace is closely connected to King Henry VIII. He had six wives and broke with the Roman Catholic Church when the pope wouldn’t annul his first marriage.

A spacious palace, Hampton Court has the most to see indoors of the five palaces. The Tudor kitchens and State Apartments are highlights.

The Tudors, Stuarts, and Hanoverians have all lived here. The many fine works of art, decorative objects, and even the painted walls themselves were collected and commissioned by the royals over the centuries.

The extensive gardens include beds of roses, herbaceous borders, topiary, and The Wilderness with its maze. William III’s Privy Garden from the early 1700s was faithfully restored in detail in the 1990s after extensive research.

The Magic Garden is a children’s playground.

Allow a full day or at least a half a day for this palace.

Many tourists go to see Westminster Abbey and the Palace of Westminster, better known as the Houses of Parliament, home of Big Ben. From there, it’s about a 15-minute walk to Trafalgar Square via Whitehall. The Banqueting House is en route.

This is a small property and doesn’t take long to visit. It’s historically significant, and also very beautiful — two great reasons to stop in.

Finished in 1622, the Banqueting House was part of the sprawling and magnificent Tudor Palace of Whitehall. A fire in 1698 destroyed everything but this part.

The history is simple on the surface, but complicated underneath. The Banqueting House embodies the timeless conflict over who is entitled to rule whom, and by what authority.

In 1649, King Charles I, a Stuart, was executed by beheading right here. There are more specific and scholarly explanations for his death, but my summary is that Charles believed a king answers only to God. His opponents, led by Oliver Cromwell, disagreed.

The ceiling paintings by Peter Paul Rubens show in glorious detail how the Stuarts envisioned the divine right of kings. Charles’s father, King James I, floats in the clouds, becoming like the divine.

The ceiling’s height enhances the drama. Inigo Jones designed these pleasing dimensions and clean vertical lines to create the perfect space for the gatherings and entertainments the royals loved.

Below, in the undercroft, an interpretive film gives more of the story.

Pro Tip: The entrance to the Banqueting House is a little hard to spot. It’s at Whitehall and Horse Guards Avenue and has a bust of King Charles I over the door.

Cozy Kew Palace, located on the grounds of Kew Gardens, was a home of the Hanoverians, notably King George III and his large family. It was built in the 1600s for a merchant. There was a newer palace next door, now demolished.

George’s father, Frederick, was never king. He died when George was young. George was raised by his mother, Princess Augusta.

Augusta was one of the first creators of the private royal gardens here. Little did she know that Kew Gardens would lead the world in plant science and become a UNESCO World Heritage site.

Visiting Kew Palace is like going to someone’s comfortable but humble country home in the 1700s, a big contrast to the opulence of Hampton Court.

George III was the last king of the United States of America. He’s also remembered for his mental illness, probably caused by a blood disorder. Some of his doctor’s well-meant but harsh treatments happened right here. There were happy times at Kew, too; George and his wife had 15 children.

Like Hampton Court, Kew Palace is outside central London but is easy to reach by public transit. Plan to make a day of it and explore the extensive gardens. The palace and kitchen usually take an hour or less to see.

Pro Tip: Entrance to Kew Palace is included in the Kew Gardens ticket. The gardens are open year-round, but the palace is closed seasonally.

We’ll end the list of Historic Royal Palaces in London at Kensington Palace.

Do you remember all the flowers left to honor Princess Diana after she died in August of 1997? That happened here, at Diana’s last home. She lived in a private area that’s closed to visitors.

Historic Royal Palaces’ interpretation focuses on Queen Victoria, who grew up here, and the Stuart Queen Mary II (the Mary of William and Mary), who lived here in the late 1600s.

Kensington Palace shows both the formal and the casual sides of royal life.

The Cupola Room and the Queen’s Staircase, both by designer and painter William Kent, are fine examples of trompe l’oeil architectural decoration from the 1700s.

Victoria’s presence shows in the Red Saloon, where the new queen held her first Privy Council meeting in 1837, weeks after turning 18. The reimagined rooms of her childhood, a few steps away, emphasize her youth and also her isolation here at Kensington.

This palace looks out onto the green of Kensington Gardens and Hyde Park. Beyond the elegant sunken White Garden is The Orangery, a Baroque conservatory where you can have tea.

The best times to visit are shoulder season and winter. During the peak times of July, August, and the school half-term breaks, most people suggest going to see the Tower of London and the Crown Jewels early in the day. Try to avoid weekends in summer and on bank holidays.

Except for Kew Palace, where you will likely spend more time outside in Kew Gardens than inside the palace, don’t let bad weather stop you. It may deter the crowds.

For definitive information about visiting, please check the Historic Royal Palaces website. There is more detailed accessibility information than most places provide, covering a range of needs.

Consider getting a Historic Royal Palaces membership if you plan on making several visits. 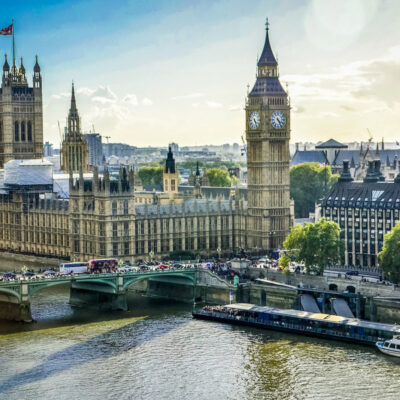