For the 50+ Traveler
News and Tips Travel Products

Review: The Best Kids’ Snowboards Of 2021 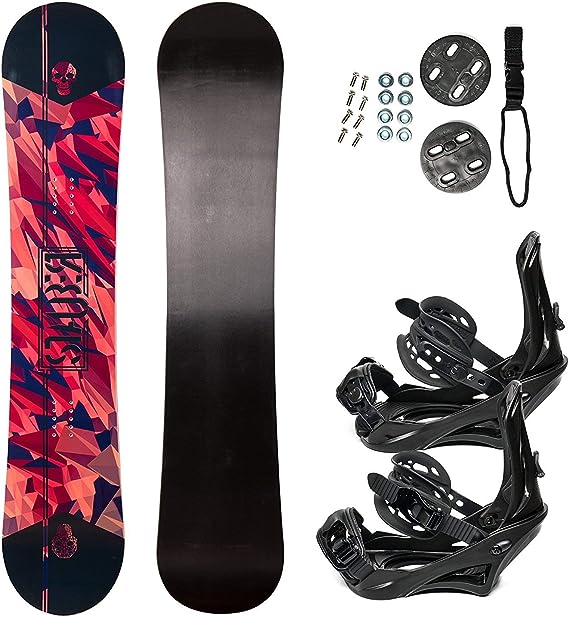 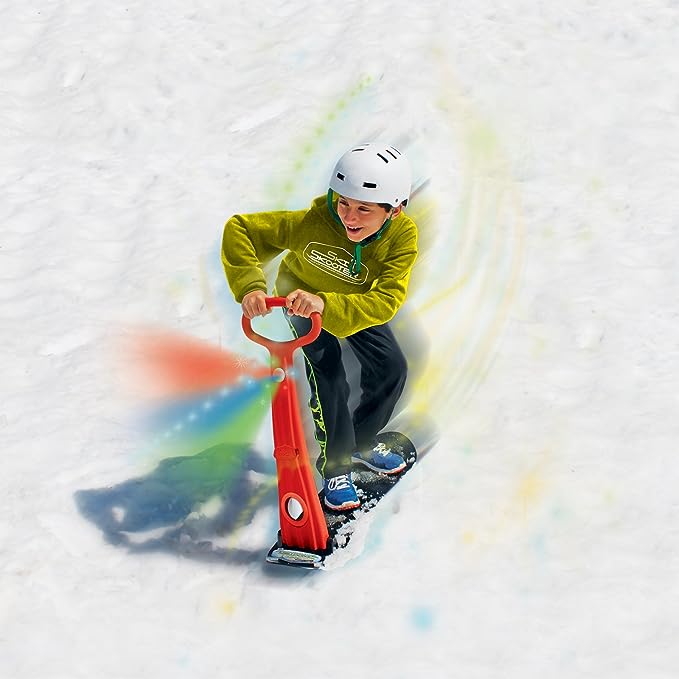 Check Price
TravelAwaits participates in affiliate programs with various companies. We may earn commission when you click on or make purchases via links.

Skiing and sledding are fun. But snowboarding? It’s a whole different dimension. And odds are, if you have snow-loving kids in your life, snowboarding holds some intrigue for them. Of course, some kids and their families are headed for groomed slopes with chairlifts and all. These kiddos might get snowboarding lessons on the bunny slopes or already know how to shred, and if they’re going to use their own boards, they’ll need to be legitimate snowboards, not toys.

If that’s not the kind of investment you’re looking to make, or you’d rather rent your kids’ or grandkids’ snowboards once you get where you’re going but do want them to have something to play with on the sledding hills closer to home, there are also snowboard-esque options that fit the bill.

Here, we consider the best kids’ snowboard options, from expertly crafted boards to fun and innovative snowboard-like toys that the kids in your life can enjoy all winter long. We also share a brief kids’ snowboard buying guide that will help you make an informed purchase.

If your child or grandchild wants to snowboard, but you want to ease in and not spend a fortune, this is a fantastic option. It occupies the territory partway between snowboarding-inspired toy and full-on snowboard, and young riders can definitely use it to coast down snowy hills and practice their balance. It has a decidedly snowboarder aesthetic thanks to its cosmic motif.

The board is made of solid polypropylene and it has adjustable bindings that should accommodate any snow boots. The upside of this is that you won’t have to invest in snowboarding boots, too. The downside is that the fit is not very secure, and the rider’s feet will inevitably come out of them from time to time.

The board can accommodate riders up to 95 pounds, but some reviewers say it can accommodate larger individuals, including adults. One reviewer who gave the product a five-star review notes that the Freeride board helped him gain confidence on smaller slopes and now he’s graduated to a real snowboard. Another calls this a “great board for kids who are just starting to snowboard.”

“Don't waste your money on an expensive board for a kid,” she warns. “They lose interest too easily. This is a perfect board for a beginner.”

Of course, this budget board isn’t loved by everyone. Some reviewers note that it doesn’t have the metal edge of a real board, the finishings look cheap, the decals aren’t placed appropriately, and the surface scratches easily. Finally, since the binding straps are riveted on, the board cannot be ridden switch or goofy.

This snowboard and binding package isn’t specifically designed for children, but it is a great legitimate snowboard option for tweens and teens. The twin directional board is available in matte and gloss finishes and 128-, 133-, 138-, 153-, and 158-centimeter sizes. You can buy the snowboard separately, but our pick comes with sturdy ratchet-strap bindings and the hardware necessary to affix them to the board. You can also level up and order a package that includes the snowboard, bindings, and a black or green wheeled snowboard bag with external pockets and straps that can be cinched down to keep the board safe and secure.

Over 75 reviewers have given this snowboard package a 4.7 out of 5 average star rating, and the 95 percent of reviewers who’ve given it four and five stars say it’s light, beginner friendly, and an incredible value for the price.

The Summit board has a camber-rocker-camber profile (more on what this means in our buying guide), and a 100 percent real wood core. The included bindings are light and relatively easy to install.

This snowboard package isn’t intended for younger children as the board is only available in longer lengths and the bindings are based on adult shoe sizes.

This obviously isn’t a snowboard. Rather, it’s a snowboard-inspired toy that’ll entertain everyone in the family and the neighborhood, from the kid (or kid at heart) riding it to their cheering -- or at least intrigued -- spectators.

The Ski Skooter has a built-in LED light with flash, strobe, and fade modes that kids of all ages will enjoy being in control of as they “kick ‘n go” down (or across) the snow, holding onto the handle for balance. The product listing notes that this sled alternative is also well suited for sliding down grass or even sand dunes. The handle folds down for easy packing and storage, and it’s lightweight, so there’s no reason it shouldn’t go on your winter (or White Sands National Park) vacation with you.

Nearly 200 reviewers give the Ski Skooter a solid 4-star average rating. It’s made of tough but flexible polyurethane that satisfied reviewers say holds up well even to rough-and-tumble play.

While this toy doesn’t have bindings, unlike the Emsco Group ESP Freeride Snowboard, it can accommodate riders up to 220 pounds. Some less-than-satisfied reviewers note that their Ski Skooters didn’t come with LED lights, or that the light didn’t work, and, since it’s not a snowboard, note that it’s not very responsive. The handle is designed to help with balance, not steering, per se.

This beginner snowboard from Lucky Bums combines features of our top and also consider picks, plus slightly more secure bindings, and is available at a great price in multiple colors (blue, green, pink, and red) and sizes (95 and 120 centimeters).

Nearly 70 percent of reviewers give the board 4- and 5-star ratings, calling it “a good buy” and “a great success.” There are numerous reviewer-posted pictures of kiddos playing and striking adorable poses on their boards, too.

The Lucky Bums bindings are simple and compatible with any snow boots, utilizing ratchet straps to provide a more secure fit than the Freeride board’s bindings.

Unfortunately, a few reviewers say the bindings weren’t the right size and show pictures of cracks in the plastic, both on the board itself and on the bindings. Like the majority of the products on our list, this board doesn’t have a metal edge, so learning steering and turning may need to come later on another board.

Review: The Best Kids’ Snowboards Of 2021

If you’ve decided to purchase a snowboard for a child in your life, you’ve got some decisions ahead of you. Obviously, it’s important to know whether the board you’re going to buy should be thought of as a sledding alternative for use on snow-covered hills near home, or if it’s going to be used on ski slopes and snowboarding runs, or in snowboarding classes.

Here are a few things to consider as you decide between our best kids’ snowboard recommendations, or continue the hunt for the right board on your own.

Our honorable mention pick, STAUBER’s Summit snowboard and binding package, includes what’s obviously a real snowboard. It comes in numerous sizes and has a steel edge and a real wood core. The package includes snowboard boot bindings. In fact, it’s not even made specifically for kids. You’ll just order based on the child’s height and, more importantly, their weight.

Some other children’s snowboard products, including the Emsco Group ESP Freeride snowboard, Burton Riglet board, and Lucky Bums’ beginner plastic snowboard inhabit the territory between snowboard and snowboard-inspired toy. They come in smaller sizes or a single size, are plastic rather than wood, and don’t have steel edges, which makes steering and turning difficult if not impossible. It doesn’t mean these are bad products, just that the real, athletic snowboarding will come later, after a child has enjoyed their first kiddy snowboard and graduates to the next level.

Finally, there are snowboard-inspired toys, like the Geospace Original LED Ski Skooter. No one’s arguing that this is a snowboard. In fact, it’s best thought of as a sled alternative that allows kiddos to get up on their feet and practicing balance while they enjoy some snow day or winter vacation fun.

Board Length, Weight Limit, And Style

The board your child needs will be determined by their weight and height. Length isn’t a big issue if you’re considering a snowboard-inspired toy. But if you want a snowboard that’s going to be suited to ski runs or snowboarding classes, be sure to consult the sizing guides provided by the manufacturer. It’s also important to note that some kids’ snowboards, like Burton’s Riglet, have low weight limits and will be grown out of quickly.

Finally, real boards (and some in-between kids’ snowboards) can be twin directional (meaning they can be ridden switch) and will have a specific profile. Flat profile boards like the Burton Riglet are very stable, whereas snowboards like the STAUBER Summit have cambers and rockers, or upward and downward curves that affect how they move over the snow. If the child you’re buying for is ready for a real board and interested in specific profiles, be sure to read up before ordering.

Scenic Byways 9 Beautiful Scenic Byways To Explore In Nebraska
Outdoor Activities One Of The Oldest Rivers In The World Runs Through These Two U.S. States

Outdoor Activities Know Before You Go: 7 Tips For Your First National Forest Adventure

Oklahoma 10 Fantastic Things To Do In Charming Guthrie, Oklahoma

Idaho How To Spend A Perfect Long Weekend In Scenic McCall, Idaho

Europe 9 Essential Tips For Train Travel In Europe
Do Not Sell My Personal Information
.