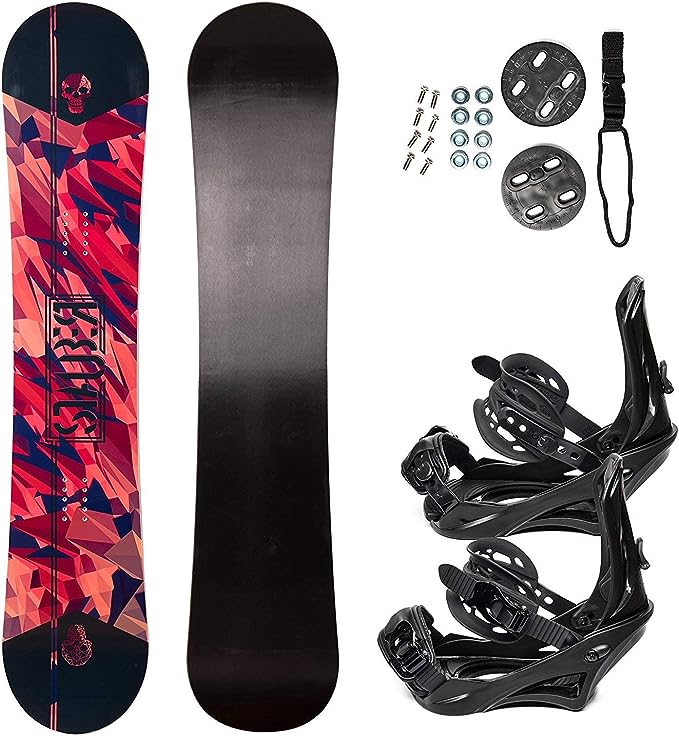 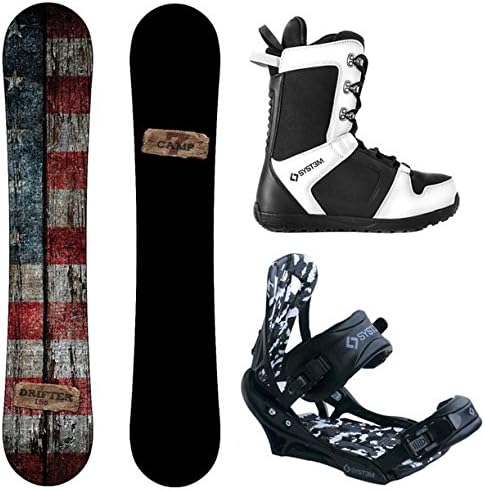 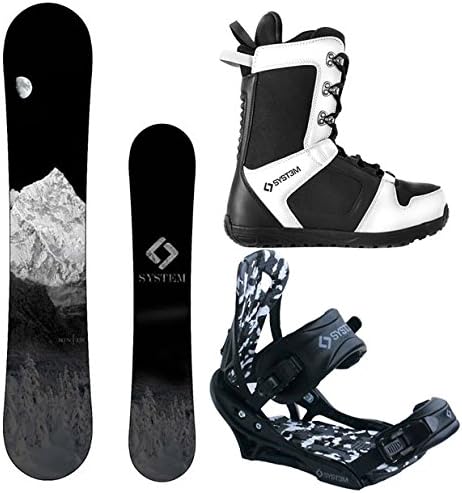 Check Price
TravelAwaits participates in affiliate programs with various companies. We may earn commission when you click on or make purchases via links.

Investing in a snowboard is no small decision, especially considering you can rent fairly easily at most popular snowboarding destinations, and owning your own board entails lugging it from place to place. But once you know you love to snowboard and have the time in your schedule to hit the slopes regularly (or the budget to invest in a snowboard regardless), why not buy and make memories -- and a statement -- with your very own board?

Here, we consider some of the most popular men’s snowboards on Amazon and share a detailed buying guide that will help you consider all the right specifications when sizing up a prospective snowboard.

Our top pick is more than a snowboard. It’s a highly rated snowboarding package that comes with an all mountain-style snowboard, bindings, and the hardware required to put it all together. Depending on the option you choose, you can purchase the snowboard, which features a double-camber design, in a matte or gloss finish. You can also opt to buy the gloss-finish snowboard without bindings, or upgrade to a bundle that includes the snowboard, bindings, hardware, and a professional-looking green or black rolling travel bag complete with zippered pockets and straps that you can cinch down to make sure the board is safe and secure.

Note that the snowboard itself is available in 128-, 133-, 138-, 153-, and 158-centimeter sizes (more on how to choose the right size for you in our buying guide below) and is twin directional, meaning it can be ridden switch, but not all sizes are available in all finish/package options.

Reviewers, who give this snowboard package a 4.7 average star rating (out of 5), appreciate that it handles weight well and call it a great board to learn on. It’s also lightweight.

A few reviewers have cited issues with the bindings, one noting that they were a little too big for their boots (the seller sent them replacements) and another saying the binding straps are not the easiest to unlatch.

Our honorable mention pick feels like a steal as it comes with high-tech System APX bindings and lace-up APX boots with heat moldable liners. The snowboard comes in 153-, 156-, 158-, 159, and 163-centimeter sizes, and the boots are available in men’s sizes 8 to 13.

The snowboard itself is a camber-rocker-camber, all-mountain style, which Camp Seven says “greatly increases float in powder and elevates your contact points to ensure you never catch an edge.”

The included bindings are somewhat fancier than the ones that come with our top pick board. Made by APX, they are some of the lightest and most durable bindings available, and they’re well-padded for extra comfort, with a full-length EVA footbed and gel-lined contour straps.

Over 80 percent of reviewers give this complete snowboarding package a four- or five-star rating, noting that it’s ideal for beginner and casual riders. Multiple buyers say the boots are light, comfortable, and fit true to size. They’re not necessarily the best snowboarding boots, but they’ll get you started.

Note that the board can be ridden switch, but it’s unclear whether it’s truly a twin directional board.

System’s MTN snowboard also has a camber-rocker-camber design. The cambered sections of the board’s nose and tail allow for “explosive pop for ollies and jumps,” and the tip-to-tail poplar wood contributes to the board’s overall quality.

More than 100 reviewers give this complete package a 4.5 average star rating, noting, as with our honorable mention package, that it’s excellent for beginners. One reviewer says he tried the MTN board at Mammoth and Big Bear national parks, where he encountered fresh powder and crust, respectively, and that it performed well during both rides.

The included APX boots are light and feature a straightforward lace-up design (they’re the same boots included in Camp Seven’s Drifter and APX Package). They can be heat molded, and numerous reviewers call them light and comfortable.

Some reviewers note that the board could be higher quality and have better finishings. Compared to Burton boards, one says it comes up short, while another advises going straight for an intermediate or advanced board and skipping beginner snowboards altogether.

Snowboards from other brands often get compared to Burton’s boards, and for good reason. Burton was founded in 1977 and has been dedicated to making snowboards and snowboarding gear ever since, and the Burton Free Thinker Snowboard, with its innovative FSC Super Fly II 700G core, reflects that dedication in its quality and design.

This particular Free Thinker snowboard features distinctive Keith Haring (one of my favorite artists!) designs set in poppy red, black, and white. The board is available in 150-, 157-, and 160-centimeter sizes. And you get what you get: This is a snowboard only, no bindings, boots, or other gear.

Burton.com reviewers give the snowboard a 4.9 average star rating, sharing great reviews that include, "Love the aggressiveness of this board,” “Best board I’ve ever had in my life,” and “Looks and rides with power.”

This board boasts a camber, all-mountain style and is somewhat stiffer than the snowboards we’ve featured so far, which make it best suited to those with some snowboarding experience.

We appreciate that Burton makes high-quality products and maintains a commitment to reducing its global emissions and diverting waste from landfills. Note that all this goodness comes at a cost: This is an expensive board. 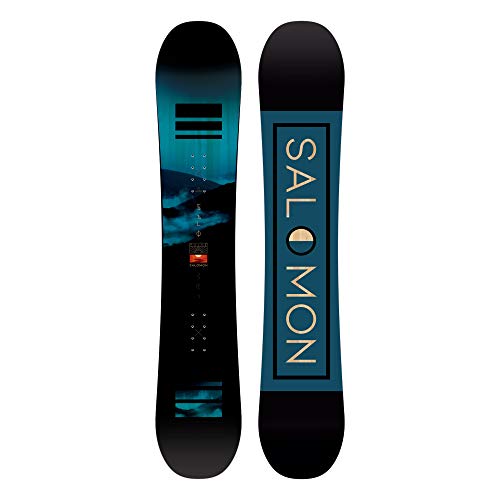 We round out our list with another high-quality -- but considerably more affordable -- snowboard option from French sporting equipment company SALOMON. The Pulse snowboard, available in 142-, 145-, 149-, 152-, 156-, 158-, 160-, 162-, and 163-centimeter sizes has a 4.5 average star rating and, like the Burton Free Thinker, is twin directional with a flat-out camber design. The product listing says this contributes to maximum stability and the board’s responsiveness.

This board doesn’t come with any extras. You’ll have to buy your boots and bindings separately. All SALOMON boards feature the industry-standard four-hole binding mounting system, so binding compatibility should not be an issue.

Unlike some other options on our list, the Pulse snowboard is truly twin directional, meaning it’s made to be ridden switch if you so desire. Its aspen core and high-density birch strips make it both sturdy and responsive, and it’s backed by a two-year warranty. Be aware that this option will be more expensive than some of the bundles we’ve considered if you also need to purchase snowboarding boots and bindings, and that reviewers on other sites note that the finish on their Pulse snowboards has scratched or chipped.

Buying an adult-size snowboard is a significant investment. Even if you already have snowboarding boots and bindings, you probably will not find a new board for under $150, and then, you get what you pay for. Some snowboards, even for recreational riding, cost upward of $800. As you consider snowboard ownership and which board is right for you, here are a few things to keep in mind.

According to an REI Co-Op expert advice article, “When snowboarding was new on the scene, people would pick their board lengths by standing boards on their tails to see how tall they were in relation to themselves. If the nose of the board reached somewhere between their chin and nose, then it was deemed the right size.” Of course, if you were buying your snowboard in person, you could use that methodology, but the REI pros say “it’s more precise to use your body weight, which is what many snowboard manufacturers recommend.” This also makes it considerably easier to buy a board online.

Be sure to check out snowboard manufacturers’ sizing charts, and order accordingly.

Looking at a snowboard from above, you’re probably not thinking about where it’s touching the snow below, unless you’ve already spent a lot of time riding. But the shape of the board -- where it’s bent or curved and where it’s flat -- makes a huge difference.

A snowboard’s camber refers to its upward curve, whereas a rocker is a downward curve. Whether you should buy a flat, camber, rocker, camber-rocker, or flat-rocker board depends on the types of runs you intend to do, the snow you’ll experience most often (that is, powder, crust, or something else) and how experienced you are on a snowboard. It’s definitely something to read up on, and an aspect of snowboarding you might want to get a feel for on a rental board before deciding on the best snowboard for your needs.

If you have boots or bindings already, these probably won’t be the best option for you, and if you’d like to be more discerning about the boots and bindings you purchase, we recommend going the snowboard-only route and considering our Best Snowboarding Boots Review 2020.

Massachusetts 10 Best Things To Do In Adorable Manchester-By-The-Sea, MA

Outdoor Activities 11 Thrilling Places That Put The ‘Fun’ In Funicular

Florida How To Spend An Amazing Long Weekend In New Smyrna Beach, Florida

Travel News The 10 U.S. Airports Where TSA Seized The Most Guns In 2020

Travel News Disney Announces Changes To Jungle Cruise At Magic Kingdom And Disneyland
Do Not Sell My Personal Information
.