We like to mix it up during our vacations. We love to visit and explore a spot’s cultural gems: museums, places of worship, monuments, and theaters. But there’s also something to be said for getting to know the natural side of your vacation destination.

That’s why, on a recent trip to Puerto Rico, we were so intrigued by the idea of a nighttime kayak adventure to see some of Mother Nature’s tiniest night-lights. We did research on bioluminescent bay tours, and immediately decided we had to book an excursion near the town of Fajardo. It was incredible, and something we would absolutely do again.

Here are a few reasons why you might want to consider it for your next trip!

1. Pack Some Adventure Into Your Vacation

While strolling through a city’s streets, checking out its overall scene, and sampling its cuisine is an essential part of any great vacation, it’s usually not very arduous. We like to try to schedule at least one day-trip where we can get a feel for a place’s natural beauty, and the kayaking trip fit that bill nicely.

Our guides with Kayaking Puerto Rico were incredible and attentive, but it was still an adrenaline shot to be heading out near the open ocean after dark in small sea kayaks. The mangrove on the way to the bay was thick and presented a challenge to maneuver around. In all, our group included about a dozen kayaks, and it was a challenge to rely only on sound to negotiate our spots in line.

To sum it up, this was truly an adventure. And for us, that’s what really sets our vacations apart. It was an evening in Puerto Rico we’ll never forget.

Before we embarked just after sunset, our guides informed us that we were about to encounter one of nature’s most elusive sights. The bays and beaches where bioluminescence can actually be observed are rare; Puerto Rico boasts three of them but they are found in other spots, too — including Viet Nam, the Maldives, and even Florida!

In Puerto Rico, tours of these special waters are some of the top experiences to have on the island, and once you glide through them, you’ll understand why.

When you consider the science behind Mother Nature’s glow-in-the-dark show, you’ll have a whole new appreciation of observing it. Our guides explained that the glow is caused by microscopic water organisms called dinoflagellates. They live all over the world, but typically not in large enough numbers to cause a discernible glow. However, when they congregate and concentrate in huge amounts, that’s when the magic happens.

We also encountered other wildlife during the trip. We learned that krill feed on the dinoflagellates, and they also attract larger fish, including tarpons. We could hear the large fish splashing around us in the dark mangrove thicket and in the bay. We also heard several wild birds, including mangrove cuckoos, calling in the mangroves. The trip was a great way to get closer to some of Puerto Rico’s non-human residents.

4. You Won’t Believe Your Eyes

For all the fumbling around in a dark kayak, once we got through the mangrove thicket and lined up in the bay, the payoff was out of this world. Our guides explained we should dip our arms far into the water and shake them around. Slowly but surely, the tiny residents of the bay started their fantastic show.

At first, we saw minuscule individual sparkles making their way through the water. It almost looked as if the bay had been zapped by static electricity! Once it was really stirred up, the murky water took on a luminous blue-white haze. The most incredible part was putting our arms and hands in the water, and seeing them light up as we pulled them from the bay. It was pure magic.

We stayed in the bay for a bit, then doubled back through the mangroves, where the extreme dark (it was now well after sundown) intensified the effect. We marveled at the sparkle coming off our oars as we made our way back to the launch site. We didn’t want to leave!

5. You’ll Get A Killer Upper-Arm Workout

We consider ourselves to be in pretty decent shape, and while the kayaking itself wasn’t that strenuous, we felt it the next day. Our trip — out and back from the bay — was about 2.5 miles and turned out to be quite a workout. Keep in mind, you’ll take it slow as you meander out to the bay and marvel at the glow. That said, don’t be surprised if you’re sore in the morning; perhaps consider popping an Advil before bed!

Our guides joked at the beginning of the tour that if all of the married couples came back from the adventure still married, it should be considered a success. We all laughed, and halfway through the mangrove thicket, realized how true that was. Our two-person kayaks were outfitted with small, dim lights, and it was difficult to see much around us, including mangrove roots and other kayaks in our group! The participants in our group ranged from first-timers to advanced kayakers, so you can imagine there was plenty of running aground, into each other, and even a tip-over or two. There were times it felt more like driving bumper cars than a graceful glide through magical waters. Just remember to call out your directions (left, right, slow, stop) and pack your patience for your partner and those around you.

There are spots in this world that are so brimming with natural beauty that you can hardly believe you’re there. This was absolutely the case with our bio bay evening. We were absolutely enchanted with the light show, especially considering it takes millions of dinoflagellates per gallon of water to generate the magic we observed. If this doesn’t make you appreciate Mother Nature, we don’t know what will!

And this is saying a lot. We’ve been so fortunate to have traveled to a lot of places around the world and have observed incredible natural wonders. We’ve seen the Grand Canyon at sunset and Niagara Falls roaring and churning. We’ve hopped and scrambled across the Giant’s Causeway, seen Costa Rica’s famed cloud forest, and stopped to ponder the giant, hulking resident tortoises of the Galapagos Islands as they lumbered by.

All of that said, our experience at Fajardo’s bio bay ranks right up there among our favorite travel experiences. It was jaw-droppingly gorgeous, and we were so glad we got to see this rare phenomenon in person.

And there are quite a few to ensure you have the best experience possible: Don’t forget the bug spray, as the mosquitoes can be fierce in the stiller waters near the mangroves. Prepare to get wet. At the start and end of the experience, you’ll need to wade into the water to hop in and out of your kayak. Try to schedule your kayaking excursion on a night when the moon is new to avoid bright moonlight, and keep in mind, the later at night your trip, the better for maximum darkness and the best possible bioluminescence.

One last thing: As great as the experience is, it’s a selfie no-go. The tiny bioluminescent critters look amazing as they put on their light-show but don’t photograph well at all. Store this experience away in your memory, because you won’t be able to capture it on your phone, or on film. 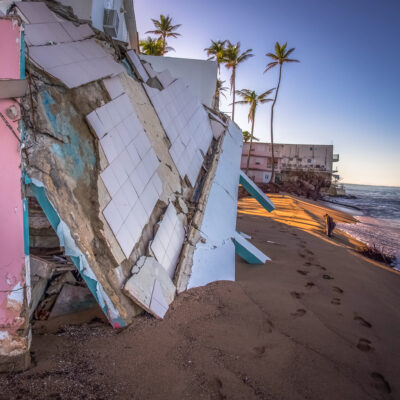 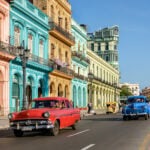 Mexico and Caribbean9 Most Colorful Cities In The Caribbean 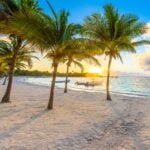