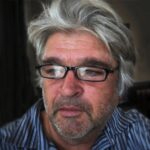 Brad Crooks
What Are Your 2023 Travel Plans?