My mother was so excited. After months of planning, she was going on her 72nd birthday trip with both of her daughters. It was her first trip to South America — Quito, Otavalo, and the Galapagos Islands.

We all flew from separate airports then boarded the same plane in Miami. Arrival in Quito for the start of the journey went smoothly. And we had an afternoon to get settled and wander. So far so good.

We woke up the next morning eager and ready to go. I looked out the window. It was dark and cloudy. What was that grey stuff falling from the sky? It reminded me of the dust that fell in New York City during 9/11. That can’t be good, I thought. I looked down. The streets were covered with the gray flakes.

We turned on the TV but no news. Then, we went down to the front desk. They told us that a volcano erupted some 60 miles outside of Quito, and the ash cloud was right over the city.

The mayor of Quito declared a state of emergency. The airport was closed. Businesses were shuttered. Quito was completely shut down until further notice.

My mother was heartbroken. She felt that she didn’t have many more years for traveling (this, sadly, turned out to be true) and wanted to see as much as possible.

How did the next two weeks go? Challenging, with many lessons learned.

Be Compassionate And Grateful

We were told that no one had been seriously injured during the eruption. We were relieved to hear that. There were serious and long-term damages to the crops and fields near the volcano. We were grateful to be safe and that no one had been killed. Our trip was not as important as the people affected. After we returned home, I researched how to send aid to the region.

Rumors were swirling. When would the airport reopen? When would the state of emergency end? Was it safe for us to go out in Quito? How were we going to get to the Galapagos? Was it safe to be there? Was there going to be another eruption? Nobody really knew the answers to these questions.

After a couple of days, I was able to get on the internet. That gave me a better sense of what was going on. I was also able to contact family and friends back home.

We still wanted to see some of Quito, so we made a decision to try to go downtown. I met a young Ecuadorian couple on the street. They worked in the travel industry, but their offices were closed. We hired them to take us around. We couldn’t go into the churches and other sites, but we saw them from the outside. We wore face masks that the hotel gave us, which were not really adequate for the situation.

After A Volcano Comes Black Rain

While we were out, it started to rain. Black rain drops. The rain contained ash from the clouds. My yellow rain jacket quickly turned black, as did everything else I was wearing. Even though we managed to keep our cameras out of the rain, the dust in the air still ruined them.

Don’t Use Your Camera Or Go Outside

Did I say that we ruined our cameras? We ruined our cameras. Don’t take your camera or any other electronic gadget outside after a volcanic eruption. There is a reason that planes are grounded after an eruption — volcanos emit very fine ash that damages them.

And, while I am at it, don’t go outside like we did. It’s very unhealthy to breathe volcanic ash. Stay inside and do whatever the hotel or tour operator tells you to do.

Travel Away From The Ash Cloud

A few days after the eruption, we managed to go to Otavalo, an Ecuadorian highland town that was not affected by the ash cloud. Finally, we could breathe and see the sun. And enjoy ourselves for a few days. It was a welcome relief.

Next up was the Galapagos cruise. The only problem was that the Quito airport was still closed. No one could tell us how, or if, we would get to the Galapagos. We were getting anxious. Finally, we were told to leave most of our luggage at the hotel and to board a bus that would take us two hours to an airport outside of the ash zone. From there, we took a plane to the Galapagos and boarded our cruise ship.

Slow Down And Be In The Moment

Once on the cruise, we tried to enjoy ourselves and forget about the previous days. We saw the blue-footed boobies, penguins, and sea lions. We met Old Lonesome George. And we had a birthday cake for mom.

Continue To Be Flexible

Eventually, we had to think about the trip home. No one knew how we were going to get back to the U.S. At that point in time, Ecuador’s only international airport was in Quito and it was closed indefinitely.

Finally, we were told that we would be flying back to the U.S. from Guayaquil. But our luggage was in Quito. They assured us that the luggage would be brought to the hotel prior to our departure. My mother was panicked. It turned out fine. The luggage arrived that night and we were ready to leave the next day.

As if we didn’t have enough challenges, my 72-year-old mother sprained her ankle very badly while on the cruise. She could barely walk with a cane.

All of the international travelers were getting re-routed through a small regional airport. It was crowded. And, by crowded, I mean that the check-in line went out of the airport and down the block. There was no way that my mother could stand in that line. Fortunately, one of the airline staff noticed us and offered to help. We were checked in and managed to find a seat for my mother.

Finally, we were on the plane going home.

My mother, sister, and I were never so happy to get back from a trip with a few photos and some stories to tell.

Planning a trip? Here are 12 things to expect when visiting South America for the first time, plus planning a girls trip to Machu Picchu: what to know before you go. 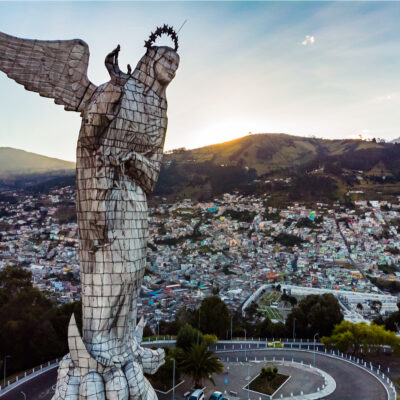 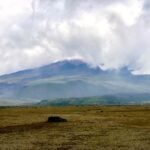 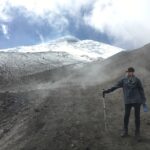 EcuadorClimbing Cotopaxi: Everything You Need To Know About This Amazing Quito Experience