8 Reasons To Add Riga, Latvia To Your Travel Wishlist

Please note that I experienced Riga as part of a hosted trip to the area, but as always, all opinions remain my own.

Riga, Latvia, may be a surprising addition to a travel wishlist, but I’m here to tell you that it shouldn’t be. I recently spent a week in the beautiful and historic city, the largest in the Baltic states, and I’m already itching to go back.

From stunning architecture and a bustling local market to a UNESCO designation, natural wonders, and more, Riga truly has it all. What’s more, the Baltic capital city offers affordability and walkability alongside its charming cultural assets.

Here are just some of the reasons why Riga should be at the top of your European bucket list.

1. It’s Known As The Paris Of The Baltics

Though parts of Riga date back to the medieval times, the city is best known for its ornate art nouveau buildings. Paris, too, features many examples of this style of architecture, and Riga is often called the Paris of the Baltics.

Art nouveau architecture is characterized by plant forms flattened and abstracted into elegant, organic motifs. Throughout Riga, pretty stems and flowers can be seen sprouting from building columns. Riga’s Old Town area — aptly named, since it’s the oldest part of the city — is full of this gorgeous architecture. Visitors to the area should take some time to simply wander the winding streets and appreciate the beautiful facades. After all, according to UNESCO, “it is generally recognized that Riga has the finest collection of art nouveau buildings in Europe.”

2. There Are Plenty Of Urban Green Spaces

Besides the pretty buildings, Latvia’s capital city and cultural heart offers lots of green space and ways to experience nature. One spot I recommend is the Daugava Promenade, which clings to the right side of the Daugava River and flows from the Old Town to Riga’s suburbs. Other options include the Esplanade, Vermanes Garden Park (the second-oldest park in the city), and Bastion Hill, which is adjacent to the striking Freedom Monument.

Gardeners should head across the river to the Botanical Garden of the University of Latvia. With more than 6,000 different plants, the garden flowers all year long. It’s easily accessible via public transit and also offers guided tours.

3. The Food Scene Is Fantastic

Baltic cuisine truly shines in Riga. Some dishes visitors should keep an eye out for are speck (a fatty smoked bacon), rye bread, beetroot soup, potato pancakes, and smoked fish. Additionally, you should try some of the local Latvian alcohol called Black Balsam; in my opinion, the cassis/currant flavor is tastier than the original.

One of my favorite local restaurants is the hip 3 Chefs eatery that features a cool open kitchen. Adventurous eaters should try the smoked eel, a Latvian delicacy. Also consider trying Latvian tapas, or bread served with a variety of different sauces like elderberry and sour cream paste with dill.

Fine-dining enthusiasts will enjoy Vincents and its unbelievable tasting menu; just remember that everyone at the table must order the tasting menu option, or no one can.

Wine connoisseurs should be sure to check out Kolonade, a cute restaurant and wine bar that’s conveniently located near the Freedom Monument and the entrance to the Old Town. Kolonade offers an excellent Latvian cheese platter, a great wine list, a solid selection of starters, and a large main-course menu. Bold travelers should try the marinated lamprey appetizer, another classic Latvian delicacy. For the most authentic experience, start by biting off the head of the fish.

Those looking for a more affordable Latvian meal should head to the buffet-style Lido, which has multiple locations around the city.

Riga’s historic center, including the aforementioned Old Town, is a UNESCO World Heritage site known for its unique combination of Eastern and Western influences. According to the UNESCO website, the historic city center comprises “three different urban landscapes — the relatively well-preserved medieval core, the 19th-century semicircle of boulevards with a green belt on both sides of the City Canal, and the former suburban quarters surrounding the boulevards with dense built-up areas with a rectangular network of streets and wooden architecture of the 18th and 19th centuries.” Travelers should explore all three areas to get the best feel for the historic center.

Latvia’s largest city is a very affordable destination, especially compared to nearby northern European cities in Finland, Sweden, and Norway. Most of the attractions in the city are close together, which makes Riga quite walkable and saves on transportation costs. Hotels and hostels are readily available at all price points, and the food is reasonably priced. It’s also cheap to get there; I took a business-class bus from Vilnius, Lithuania, for less than $30. On the whole, Eastern Europe is cheaper than Western Europe, so it’s an especially attractive destination. As always, for the best savings, visit outside of the high season (May through September).

London received 20 million visitors last year. Rome welcomed just under 10 million tourists. Paris was the destination for almost 15 million travelers. Meanwhile, Riga hosted just 3.5 million visitors in 2018. Even during the busiest month of August, hotels were only at about 80 percent capacity. This means that no matter when you visit, it won’t feel like high season. The streets won’t be choked with tourists, it won’t be impossible to get dinner reservations, and it won’t feel horribly busy and crowded.

I visited Riga in November, and it was completely delightful. Besides the ladies at the conference I was attending, the Women In Travel Summit Europe, I did not meet one other North American tourist. This was a refreshing change of pace from the congested Amalfi Coast, the clogged streets of Lisbon, and the bustling city of Dublin.

7. There’s A Spa Getaway Nearby

Riga is a quick 20 minutes from the Baltic coastal getaway of Jurmala. Jurmala is a stunningly beautiful area — it’s no wonder it’s known as the Pearl of Latvia! It’s home to gorgeous and historic wooden homes, a soft white sand beach on the Gulf of Riga, pine forests blanketed with blueberries, open-air concert venues, and picturesque sand dunes. But what Jurmala is especially known for is its spa culture.

The area has historically been home to numerous healing water spas and was a popular destination for Soviet officials during the occupation of Latvia. I spent a lovely morning at the Hotel Jurmala Spa and received a relaxing massage. My friends enjoyed more traditional offerings, including an amber treatment and a linden blossom ritual. There’s a tasty restaurant on-site that offers healthy modern Latvian dishes.

Visitors can take the train from Riga to Jurmala for little more than 1 euro.

8. It’s Home To One Of Europe’s Largest Markets

Riga’s scenic Central Market was once the largest on the continent, and it still ranks as one of the area’s largest. Its centerpiece is five huge former airplane hangars that are both impressive and foreboding. The market stalls are bursting with colorful produce, fermented goodness, fresh-baked bread, fresh fish, and so much more. One of the best ways to embrace a new destination is to check out its market, so I really recommend visiting this spot. I sampled sauerkraut, rye bread, and pesto on my excursion there. The Riga Central Market is conveniently located right next to the railway station and bus terminal, so there’s no excuse to miss this attraction!

It’s clear that Riga deserves more attention from travelers. From its affordability and lack of overcrowding to its historic center and up-and-coming food scene, the Paris of the Baltics truly deserves a place on your travel wishlist.

Have more time to spend in the area? Check out Lithuania’s dynamic capital city of Vilnius, the second-largest city in the Baltic region, or spend some time in Latvia’s pristine national parks. The biodiverse Kemeri National Park with its famous bog is a great option. 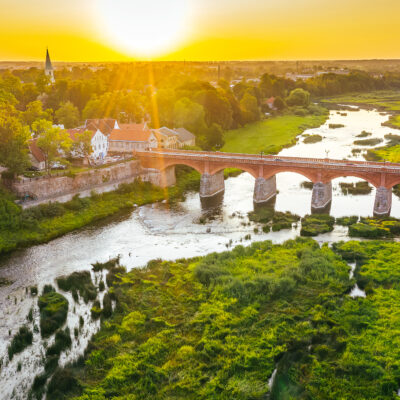