Greenland Dogs: The Pups That Make Getting Around This Huge, Icy Island Possible

Greenland is one of the world’s most beautiful countries, but it’s not exactly a forgiving habitat. About 80 percent of the island is covered with ice, and even in relatively temperate parts of the country, temperatures rarely top 50 degrees Fahrenheit.

In 2017, one research station recorded a temperature of -27.4 degrees Fahrenheit … in July. During the winter, getting around the island can be a difficult ordeal.

To live in this harsh environment, you need thick skin — or thick fur. Greenland Dogs are bred for the task, and on a typical trip to Greenland, you’ll see these canines pulling sleds, accompanying humans on hikes, and performing other essential tasks for their masters.

If you’re considering a trip to Greenland, you’ll want to understand a few key facts about these amazing animals before heading out (and if you’re not planning a trip, writer Karen Warren could change your mind as she finally went to Greenland and it was well worth the wait). Here’s what you need to know.

Greenland Dogs are an extremely old breed; like other sled dogs, they’re among the first domesticated canines and are closely related to Siberian wolves. They’ve been used by humans since ancient times for transportation, hunting, and hiking, and they have a number of adaptations that make them ideal work dogs in icy environments.

For starters, they have dense double coats, which provide adequate insulation to keep them comfortable at temperatures of up to -75 degrees Fahrenheit, and their small ears are resistant to frostbite. A typical Greenland Dog is strong, lean, and tireless, with muscular legs capable of hauling sleds long distances with ease.

Their legendary endurance is something to behold — and if you spend a decent amount of time in Greenland, you’ll certainly see why they’re highly prized by hunters and explorers. You’ll rarely see them outside of Greenland, as their natural energy and intelligence makes them poor housepets.

That brings us to an important point: Greenland Dogs are cute — all dogs are cute — but travelers should resist the urge to treat them like lap dogs. While they’re affectionate with humans, they’re bred to be independent, and they maintain a pack mentality. They’re often quite attached to their owners but less obedient to strangers, and they’re meant to be extremely focused on their jobs.

If you’re taking a tour and your guide has a Greenland Dog, refrain from feeding or petting the animal (unless you’re instructed otherwise). That said, feel free to ask your guide about his animals; they’re used to receiving questions from curious travelers, and they’ll be happy to explain the work that goes into maintaining a sledding team.

Think that you’re not physically capable of spending hours sledding across the ice sheet? Good news — sledding is basically a national pastime in Greenland, and provided that you’re properly dressed for the weather, you can and should enjoy this incredible experience.

Sledding lets you see the country in a natural and engaging way, and if you’re interested in witnessing Greenland’s unique landscapes, you’ll love every second. There’s nothing quite as thrilling as hearing the ice crunching under you as while you move across the barren ice, gazing up at the starry skies or bright auroras. There’s certainly a sense of isolation, but a good sled tour will be both safe and comfortable.

Dog sledding tours can span anywhere from several hours to over a week, and they’re not gruelling on the riders (or the dogs, for that matter, since Greenland Dogs are literally born to traverse the ice). You won’t need any prior sledding experience, but be sure to dress for the occasion: Wool socks, hats, fleece jackets, and rainwear are essential items. Plan on adjusting your clothing for the weather, as temperatures can fluctuate significantly when you’re out on the ice.

When To Visit Greenland

Depending on what you’re hoping to do during your time in Greenland, you’ll need to schedule your trip carefully. To see the northern lights (officially the aurora borealis), visit between mid-August and late April. The phenomenon is visible throughout the country, though it’s less prominent in Northern Greenland.

If you’re hoping to avoid the harsh winters, travel between June and August, when giant whales congregate off the coast. For optimal dog sledding, however, the winter months are your safest bet. To keep your budget in check, travel during the final weeks of autumn; tourism is less common during the so-called shoulder seasons, so you’ll be able to avoid the crowds while paying less for your accommodations.

Greenland speaks to every traveler differently, but if you’re at all interested in this arctic wonderland, it’s a trip worth taking. You could traverse some of the most difficult terrain on earth — with plenty of help from your four-legged friends — and you’ll be rewarded with some of the most outstanding views imaginable.

Considering a trip north? Read up on visiting the Arctic Circle responsibly with these seven things to know. 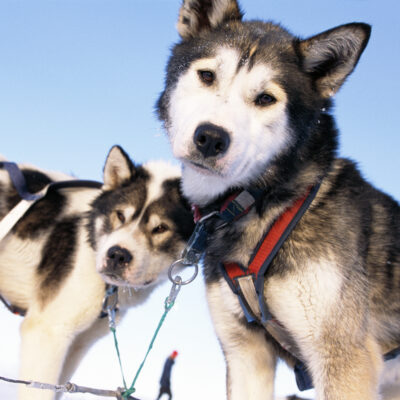 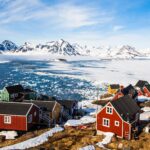 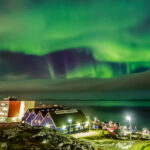